U.S. regional policy must look at the Karabakh conflict

The western world often leaves Azerbaijan’s status as its own republic out of the conversation of regional diplomatic solutions, tending to view its strong ties to Turkey as mutually inclusive to Ankara’s agendas. This perception guides some of the rhetoric regarding the Karabakh conflict as well as the approach the incumbent U.S. President should take in U.S.-Turkey, Caucasus policy moving forward. Previous rhetoric’s flaws will need a new light shed to move toward lasting peace solutions. 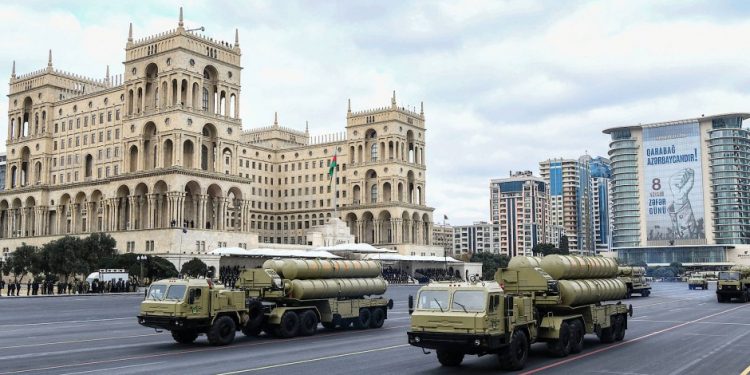 On March 30, Foreign Policy commented on believed solutions that U.S. President Joe Biden could take to influence lasting peace in the Karabakh conflict. This renewed the western conversation regarding the conflict which stalled again in November after a Russian mitigated ceasefire.

Yet, the involvement of U.S. policy in the region appears to a moot point at best for the process of establishing long-lasting peace in the region. The western media continues to publish heavy bias toward the Armenian side of the conflict. For example, this pro-Armenian leaning has led the western press to observe Biden’s UNESCO rapprochement as something to be reconsidered and reformed after Azerbaijan’s “antics” in the Karabakh conflict. The power of Armenian-state-linked lobbies in the western world influences a lopsided approach to addressing the de-escalation of the conflict in the region.

The western media has politicized destruction of landmarks and monuments in the Karabakh region from a heavily pro-Armenian stance, disregarding the complex issues of the Karabakh’s recent occupied zone status, the illegal occupation of the territory, and allegations that some Armenian sites in the region that were destroyed were erected illegally from the debris of Azerbaijani cemeteries destroyed during the war.

A partisan rhetoric toward the destruction of the Karabakh conflict is inflammatory as both nations seek to validate their historical abuses, Armenia by the Ottomans in the early 20th century, and Azerbaijan seeking justification and equal recognition for ethnic cleansings of the First Karabakh conflict, see AzerTac news.

Biases, coupled with the complex domestic tensions within Armenia as a direct fallout of the rhetoric-driven war, lead to a scenario where the western voice is ineffective at best and provocative at worst.

Despite this fact, western rhetoric continues to shape the opinion of proxy conflict and an American benefit from it.

The National Interest reported on March 7 that America may be in the process of realizing a foreign policy goal in Turkey as the Karabakh conflict ended with Ankara’s diplomatic agenda of a stronger allied Caucasian military presence realized. The report looked at the western benefit from a perspective of fielding off the advancements of China and Russia. Central Asia is a region in which the United States’ interests and those of Turkey are in relative agreement.

However, the tendency of the western media and rhetoric to address the regional conflict of Karabakh as a mutually inclusive part of U.S.-Turkey policy fails to fully consider Azerbaijan as a sovereign nation, while simultaneously oversimplifying the interests of Ankara in the region.

In an interview with Republic Underground on February 8, Middle East Islamism expert Dr. Jonathan Spyer noted that the western world makes similar critical errors in assessing the role of Turkey as a shield for Islamism out of Iran.

“If we look at the areas where Turkey and Iran are active, whether it’s Iraq, Syria, or Lebanon. For the most part, they uneasily co-exist, (and sometimes cooperate),” said Dr. Spyer, also noting that Turkey is also, in some ways, a parallel Islamism system to Iran and that Biden, in his rapprochement to Iran, is likely to be stiffer on the Turkish government.

“Turkey’s not really interested in being a shield against Iran in those areas. So, I think it’s a bit of an illusion to think that Turkey will do the job of resisting Iran. Turkey doesn’t want to do that, doesn’t say it wants to do that, it doesn’t act as if it wants to do that. I think we need to be clear on that.

If we want to resist Iran, we need to find allies that want to do it. The Republic of Turkey is not going to be one of them, I think,” said Spyer.

Despite shared ethnic roots, and an increased public policy between the states, Turkey and Azerbaijan are separate political systems removed by the years of secularization that was imposed by the Soviet presence in Azerbaijan. Azerbaijan’s secularization has been downplayed in the western media, which largely views the Shia Muslim majority in Azerbaijan through the same lens as it views the Khomenist fundamentalist of Iran. This is likewise an error of judgment that fails to account for the diversity of Azerbaijan of both its pre-Soviet and Soviet eras. Azerbaijan has no real tendency to converge into a state of Islamism, a fact that has brought critic from its southern counterpart Iran.

To review Azerbaijan through the lens of Turkey and the interests of the Turkish government, which leans to the advancement of an Islam-oriented public policy, is in error. Rather, the U.S. and Western institutions could approach a depressurized narrative toward Azerbaijan and an approach of the post-Soviet reformed republic that is not viewed through the lens of Ankara’s regional interests or Russia’s regional interests.

The rhetoric surrounding weapons and tactics

A common issue surrounding the Karabakh conflict has been the politicized rhetoric of the munitions engaged in the conflict, as well as the tactics of the war in the region.

An example is that of the Iskander missile debacle. OC Media reported on April 1 that, after long weeks of denial from Russia, Armenia, and Azerbaijan regarding the use of Iskanders by the Armenian forces, the Azerbaijani state seemed to confirm the missiles were used. The efficacy of the missiles was called into question by Armenian Prime Minister Nikol Pashinyan at the close of the war. Pashinyan faulted the “Russian-made” missile system Armenian forces used for the nation’s failure to win the Karabakh 2020 campaign. The territory war over Karabakh was a central policy of Pashinyan’s 2018 rise to power, which followed his Velvet Revolution.

In addition to the politicization and resulting backlash in Armenia over the Iskander missile, Azerbaijan’s arsenal was drawn into press rhetoric over the efficacy of Azerbaijani tactics. Israeli-made drones, as well as Turkish-made munitions, were drawn into rhetoric suggesting that the 30-year Soviet-era conflict over the Karabakh territory was rather a Russian-Turkish proxy war. This is, however, a fallacy of understanding the general manufacture of munitions on the part of the media.

In October 2020, U.S. defense expert Benjamin Minick explained that many countries manufacture munitions that are of relatively similar make. The politics of attaching a national label to a weapon’s make only exists to garner proofs for politicized talking points and engage an uninformed or underinformed public.

In the October interview, Minick noted that the nature of munitions to look similar and be of similar make could cause outside analysis to confuse specific weapons with others.

“I don’t believe they actually know what cluster munitions are, or what they do, to be real honest with you. If they were to use cluster munitions, it would be extremely dangerous. They are, in fact, frowned upon in use during war at all, let alone where population might be, noncombatants and things of that nature, because of their destructive nature,” he said.

“The reality of it is, there are high explosive warheads that can look like cluster munitions, but there were no cluster munitions used here. The claims that these were “made in Israel” are also baseless. There are many countries that make these types of weapons, and they all basically do the same thing. I find it hard to believe that there is debris lying around that has “Made in Israel” stamped on it, I mean realistically.”

Minick spoke in direct reference to a report made by the Human Rights Watch that suggested Azerbaijan had used Israeli-made cluster munitions during the conflict. The rhetoric was unrealistic at best. Likewise, the Human Rights Watch would have had extremely limited access to the region at the time it made the report in question due to the limitations of the conflict.

Republic Underground’s media vice president Irina Tsukerman recently spoke with International News. az regarding the rhetoric of the Armenian government and how Pashinyan’s stiff policy toward Karabakh contributed to the 2020 era conflict. Read more at the link.

The western world continues to look at the South Caucasus region in a flawed sense, through the lens of imperialism or Soviet-transmitted rhetoric. The alternative to his view is a devotion to de-escalation of harmful, lop-sided rhetoric and approaching an American investment in public unbiased infrastructural and media support, as was noted in American national security analyst Irina Tsukerman’s comments with International News. az.

In post-conflict process, Azerbaijan and Turkey continue to increase relations. This diplomatic relationship continues to be used as a talking point of western rhetoric by such outlets as Massis Post. The apparent regard for the Armenian political report and condemnation rhetoric of Azerbaijan suggests that the incumbent U.S. State Department is likely to repeat diplomatic errors of past administrations that could nullify the western influence in regional conflict deescalation.