The International Anatolian Eagle-2021 Exercise will be held between June 21- July 02, 2021, at the 3rd Main Jet Base in Konya with the participation of Turkish Naval Forces and Air Force and Azerbaijan, Pakistan, Qatar Air Forces, and NATO AWACS elements. 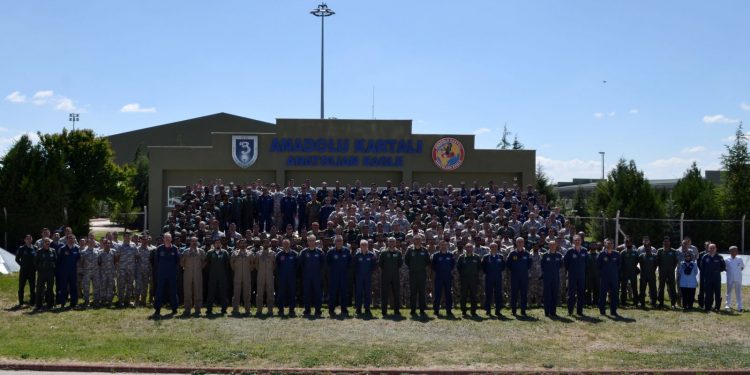 The International Anatolian Eagle Exercise is carried out every year at the Anatolian Eagle Training Center (Konya) in a realistic combat environment to improve the capabilities of national and foreign elements, test new tactics and techniques, develop joint and combined operational procedures, and maximize mission effectiveness by increasing mutual support between forces.

With training aids such as the Air Combat Maneuvering Instrumentation (ACMI) System and the Post-Mission Analysis System, which are used to evaluate the training performance simultaneously or in a very short time, Anatolian Eagle provides an advanced joint training environment to the participating elements to increase their combat readiness level.

Established at the 3rd Main Jet Base in 2001, the Anatolian Eagle Training Center (AKEM/AETC) is one of the three tactical training centers in the world with similar capabilities and is the only tactical training center in Europe. The exercise area covers Lake Tuz (Tuz Gölü) and its surroundings with a size of 300×400 km, enabling participant aircraft to employ their flight tactics without any limitations and without being affected by civilian air traffic. Since the establishment of the center, a total of 43 training terms (24 international and 19 national) and about 24,000 sortie flights have been accomplished with the participation of 15 countries.

During the International Anatolian Eagle Exercise, the certification of the Turkish Air Force (TurAF) elements committed to the NATO Response Force (NRF) will also be carried out for the first time. The combat readiness and interoperability of 6x F-16s, 1x KC-135R tanker aircraft, and 6x Stinger Air Defense Teams, committed by the Turkish Air Force to the Very High Readiness Joint Task Force (VJTF) as part of NRF will be evaluated.