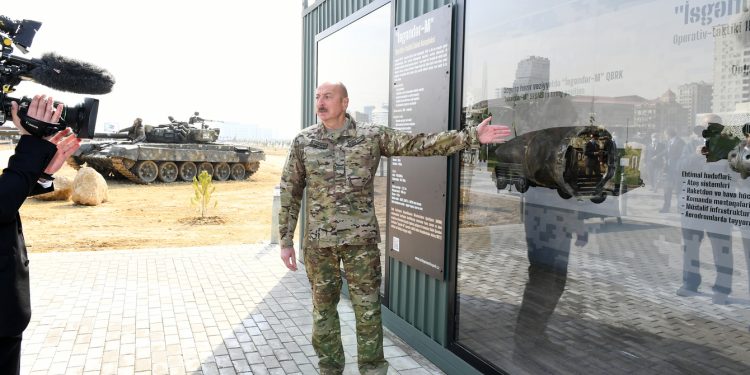 President Ilham Aliyev points out at the debris of Iskander-M missiles put on display at the newly launched Military Trophy Park in Baku, Azerbaijan, April 12, 2021 / President.Az

Baku’s goal has been to balance cooperation with NATO and seeking to maintain relations with Russia which, while never warm, have not been allowed to deteriorate.

Azerbaijan’s balancing act was never blind to Russia’s nefarious interventions in the South Caucasus in the early 1990s. Soviet forces massacred hundreds of Azerbaijanis when they intervened in Baku in January 1990 in what became known as ‘Black January’ (Qara Yanvar in Azeri). Russian forces of the 366th CIS Regiment also assisted Armenian forces in one of the worst atrocities in modern times in February 1992 in Khojaly, where 613 people were murdered according to Azeri authorities.

Russian involvement also came in other ways. During the 27 years of Armenian occupation of 20% of Azerbaijani territory, Yerevan has embraced security, political and economic integration with Russia, and in 2013 backed away from signing an Association Agreement with the EU. Russia supplied most of the weaponry used by Armenia during last year’s Second Karabakh War. Therefore, it is not surprising that most Azerbaijanis were suspicious when the peace deal agreed last November to halt fighting between Azerbaijan and Armenia included the stationing of Russian peacekeepers in northern Karabakh, the only Azeri region remaining in Armenian hands.

These decades of Azerbaijani suspicions of Russia have now come to the fore in a new scandal over the firing of Iskander missiles during last year’s war. No other issue reflects the complicated and controversial nature of relations between Baku and Moscow in the aftermath of the November agreement as much as the mystery of Russian-produced Iskander long-range missiles that were allegedly fired by Armenia on Shusha, a leading centre of Azeri culture that was liberated by the Azerbaijani military after more than two decades of Armenian occupation.

When news first began to emerge that the Iskander missiles had indeed been fired, this was greeted with a flood of angry denials and disinformation from the Kremlin. At the time, Azerbaijan’s President Ilham Aliyev insisted that he had no intelligence to back up the media claims and was therefore unable to confirm or throw further light on the matter.

Russian denials aside, the Iskander story became more convoluted when Armenian Prime Minister Nikol Pashinyan made light of the missiles’ accuracy, saying that only 10% of those that had been fired had exploded. This not only contradicted Russia’s denials, but was also taken as an insult by both the Kremlin – since the missile represents a new generation of elite weapons – and the Armenian military, which is presumably proud to have it in its arsenals.

It is worth pointing out that Moscow has always disliked Pashinyan, largely because he came to power in 2018 through one of the so-called ‘colour revolutions’ that the Kremlin detests. Various Armenian opposition parties seized on Pashinyan’s statement to buttress their claims that he was an incompetent leader who had led Armenian forces to a crushing defeat, and that he was now insulting Russia, one of the country’s few allies. Pashinyan had hoped to boost his patriotic credentials, but instead he had unleashed a storm of disquiet threatening him with a military coup d’état.

But the real problem in this story is Russia’s attempt to cover up the use of Iskander missiles in the 44-day war between Armenia and Azerbaijan. More intelligence became public on 2 April when the Azerbaijan National Agency for Mine Action, a government outfit tasked with clearing ordnance from occupied territories, found parts of a missile in Shusha in the area of southern Karabakh that had been liberated by Azerbaijan. Unfortunately for Moscow and Yerevan, these fragments were not from the built-for-export Iskander-E missile but from the Iskander-M (known by NATO as the SS-26 Stone). Because this missile has a range exceeding 300 km, its export violates the Missile Technology Control Regime.

The discovery led to a change in Baku’s tone. At an international conference attended by Western academics and journalists held on 13 April at Baku’s ADA University, Aliyev expressed in an unusually outspoken manner his strong disappointment at Russia’s denials that it had supplied Iskander-M missiles to Armenia. Aliyev said that although he had raised the revelations with Russian President Vladimir Putin and Defence Minister Sergei Shoigu, they had not officially responded.

Russian denials continued: on 20 April, the Russian Ministry of Foreign Affairs refuted allegations that an Iskander missile was used by the Armenians during the 44-day war. Interestingly, however, President Aliyev was uncharacteristically persistent, accusing Moscow of failing to provide an adequate answer to Azerbaijan’s legitimate demands. Parts of the Iskander-M missile were deliberately placed in an open display in the Military Trophy Park that opened in Baku in the second week of April to celebrate Azerbaijan’s military victory.

The scandal brought to the surface latent Azerbaijani distrust of Russia, not only over its dealings with Armenia, but also because of its close ties with Iran – a country that, for its own internal reasons, denies the very existence of an Azerbaijani nation.

Despite the rising anger, however, Azerbaijan’s relationship with Russia is defined by two opposite trends. On the one hand, Baku appreciates the fact that Moscow did not intervene to prevent the Azerbaijani army from defeating Armenia and recapturing seven districts and southern Karabakh, despite Armenia’s membership of the Russian-led Collective Security Treaty Organization. Russia is also a guarantor of the ceasefire agreement, together with Turkey, Baku’s major ally.

Yet at the same time, some of the actions of Russian peacekeepers in northern Karabakh are becoming a cause for concern in Baku. These include frequent meetings with the unrecognised Karabakh separatist authorities, an unwillingness to prevent infiltration by Armenian terrorists who have launched military attacks on Azerbaijani forces, and stalling progress on important parts of the ceasefire agreement.

Representatives of the former Karabakh separatist authorities, such as General Vitaly Balasanyan, continue to talk with bravado as though nothing has happened to the Armenian army, denying any opportunities for the reintegration of the remaining part of the breakaway region controlled by Armenia with Azerbaijan, or the return of Azerbaijani internally displaced persons. The Kremlin and Russian peacekeeping forces have remained silent and have not reacted to this continued assertiveness from Armenian leaders. However, plans by the Russian peacekeeping forces to celebrate ‘Victory Day’ on 9 May at the Khankendi airport in Khojaly, the site of the massacre of 613 Azerbaijanis (according to Azeri authorities) in 1992, have added fuel to the fire.

When the missile scandal surfaced nearly a month ago, Moscow claimed it would investigate whether the Iskander-M missiles were illegally exported in a blatant act of high-level corruption, perhaps leading to a reshuffle among Russia’s arms exporters. However, subsequent Russian dismissals of Azerbaijani evidence regarding the missiles suggest the Kremlin is likely to stay silent.

As things currently stand, there is little hope in Baku that Russia will admit to supplying Iskander-M missiles to Armenia, let alone their use in combat against Azerbaijan. Such an admission would not only expose the hollowness of previous Russia statements, but would also be embarrassing for Moscow because it would suggest that Pashinyan was correct in ridiculing the missiles’ military effectiveness.

Nonetheless, Russia’s official policy of balancing between Armenia and Azerbaijan was always fraught with difficulty and is now coming apart at the seams, long before the five-year deadline for Russian peacekeepers to withdraw. It was never a secret that Russia had always favoured Armenia. But the Kremlin’s open disregard for international legal obligations, disinformation about the supply of Iskander-M missiles to Armenia and unwillingness to prevent Yerevan from using them during last year’s war will not go unnoticed in Baku.

Murad Muradov is the Co-founder and Deputy Director of the Topchubashov Center, a think tank in Baku, Azerbaijan.

Taras Kuzio is a professor in the Department of Political Science at the National University of Kyiv-Mohyla Academy, Ukraine.