The Minsk Group and the failure of multilateral mediation

2021 is a lousy year for proponents of multilateralism. NATO’s mission in Afghanistan collapsed into uncontrolled chaos. Despite renewed efforts to resolve the conflict under UN auspices, Yemen remains the world’s worst humanitarian crisis. 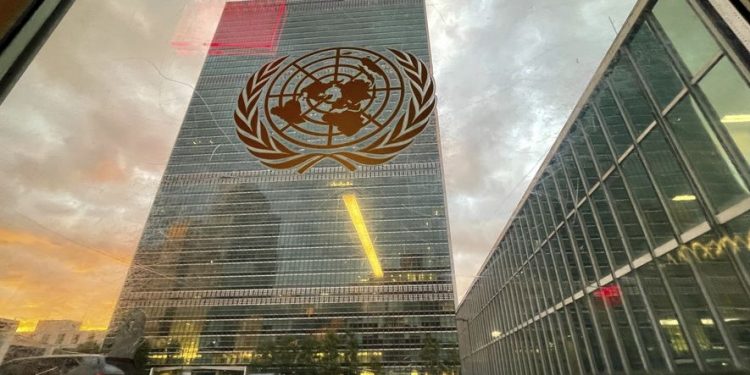 The United Nations headquarters building is seen from inside the General Assembly hall, Tuesday, Sept. 21, 2021, during the 76th Session of the U.N. General Assembly in New York. (Eduardo Munoz/Pool Photo via AP)

The United States’ recognition of Morocco’s sovereignty over Western Sahara reversed decades of UN-sponsored mediation. International cooperation has given way to petty nationalism in response to the global COVID-19 pandemic.

While multilateralism may not be dead, a long list of failures demonstrates that the international fora sustaining it are no longer fit for purpose.  Few examples better symbolize the dysfunction than the Minsk Group’s mismanagement of the Nagorno-Karabakh dispute.

Established in 1992 by the Organization for Security and Cooperation in Europe (OSCE) to resolve the territorial conflict between Azerbaijan and Armenia, the Minsk Group epitomizes the obsolescence of current multilateral mediation mechanisms.  A 1994 ceasefire left Armenia occupying a fifth of Azerbaijan after going to war over the smaller region of Nagorno-Karabakh that hosted a significant Armenian community.  After 27 years of fruitless Minsk Group mediation, Azerbaijan unilaterally upended the status quo during a 44-day war that began on September 27 of last year that fundamentally altered the nature of the conflict.

Azerbaijan recovered most of its territory previously lost to Armenia, including 40% of Nagorno-Karabakh itself. More importantly, however, the conflict put a stake through the heart of the Minsk Group.  French bias in favor of Armenia and American disengagement allowed Russia – the third member of the Minsk Group’s troika of co-chairs – to unilaterally fashion an armistice that secured Moscow’s unrivaled status as the region’s pre-eminent power broker.

A recent report by the Jamestown Foundation provides a compelling obituary on the Minsk Group: “Multilateral diplomacy as an instrument for conflict-resolution … has run out of places in which to fail in former Soviet and nearby territories where Russia is involved. The West has tried multilateral diplomacy only to be defeated at its own game in Georgia, Moldova, Ukraine, Syria, and now in the Armenia-Azerbaijan conflict over Karabakh.”

Many of the Minsk Group’s failings are endemic to the problems that plague other international conflict resolution efforts.  They neglect the re-ordered power dynamics of a post-Cold War world in which newly assertive regional powers like Russia, China, and others (Turkey, Iran, Saudi Arabia, and the United Arab Emirates) have the political will and rapidly developing military capabilities to pursue their interests aggressively.  This new level of interventionism, combined with the overstretched commitments and creeping conflict fatigue of the traditional guardians of the international order, fosters a zero-sum mentality that severely limits the prospects for negotiated compromise.

An exacerbating factor is a need for consensus within the leading fora for international diplomacy, which compromises their effectiveness.  The memberships of the OSCE, the EU, NATO, and even the UN Security Council are simply too diverse and their mechanisms too unwieldy to allow for timely or dispositive decision making.

And yet, despite these structural deficiencies and geo-political realities, America’s leaders and its allies persist in flogging a dead horse.  In response to a recent outbreak of violence along the Azeri-Armenian border, the U.S. State Department urged the parties on July 28 to “return to substantive discussions under the auspices of the OSCE Minsk Group.” Secretary of State Blinken doubled down on this call only a few weeks ago in a letter to his Armenian counterpart, when called for “re-engagement in substantive negotiations under the auspices of the Minsk Group Co-Chairs as soon as possible.” Great Britain has also recently asserted that “the Minsk Group remains the primary format through which a settlement should be reached.”

The harsh reality is that the slavish devotion to obsolete and fatally flawed conflict resolution mechanisms in Nagorno-Karabakh and other regional hot spots dooms the West to growing irrelevance and failure. Meanwhile, opportunistic adversaries exploit the situation to their advantage, thereby further eroding U.S. credibility.

Is there a viable alternative – a new paradigm that could successfully re-energize effective multilateral mediation, consistent with Western values and interests?  Or do U.S. policymakers, overwhelmed by a rapidly changing world and facing a domestic audience that has grown impatient with open-ended conflicts in far-off lands, lack the will and imagination to respond effectively?  These questions are open to debate, but one thing is for sure: America’s failure to act will only embolden our adversaries and undermine our allies.