The new face of the left in the 21st century: Accelerationism

Acceleration is a physical term, the word that translates from Latin roughly as "speeding up". Accelerationism is the idea in political and social theory that capitalism, or some processes associated with it, and technological change should be "accelerated" and drastically intensified to create radical social change. 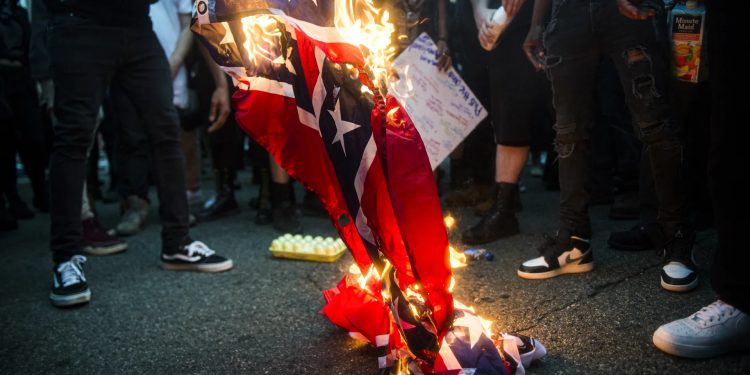 A confederate flag is burned by demonstrators protesting the Unite the Right 2 rally near the White House in August 2018. Sarah Silbiger/CQ Roll Call/Getty Images

Although the term “acceleration” first appeared in physics, it migrated to fiction, then to philosophy, sociology, and other areas. If you are interested, read the novel Lord of Light by the American science fiction writer Roger Zelazny, and the discussions of the Cybernetic Culture Research Unit cofounded in the 1990s by English philosopher and speculative realist Nick Land, a professor at the University of Warwick.

The idea of ​​writing this article came to me after watching a Netflix series. Based on real historical facts, Manhunt: Unabomber is about the mathematician, philosopher, anarchist and terrorist Ted Kaczynski. From 1971 to 1978, Kaczynski lived as a recluse in a cabin he built in the woods (without any electricity or running water). Seeing that the technology was already at the doorstep of his home, the terrorist philosopher realized the impossibility of escaping the industrial society and began to send homemade bombs by mail, addressing them to symbolic representatives of this society. For 17 years, his identity and location remained undiscovered. In 1995, Kaczynski sent a letter to The New York Times and promised not to mail any more bombs if the Times or The Washington Post published his manifesto “Industrial Society and Its Future”. After much debate, the manifesto was published, and the terrorist was identified by his writing style. What interests me the most in the series, along with the themes of industrial society, anarchism and state control, is the fact that the language and style used by a person is as unique as fingerprints, and this is even used in forensic science. And a phrase Kaczynski said in one of the episodes prompted me to write about the new trends criticizing capitalist society. In the same episode, Kaczynski also says, “One day, this mockingbird began singing in the backyard there, and I began to realize that the mockingbird is singing the car alarm…”

In 2013, Canadian philosopher Nick Srnicek and his American colleague Alex Williams published the “Manifesto for an Accelerationist Politics”. In a short time, the manifesto caused a great resonance—interestingly, not only among the left.

This manifesto promises new perspectives for the leftist movement bogged down in a quagmire of self-repetition. Relatively speaking, there are two opposite types of attitudes and reactions to the world of technology growing at an inconceivable speed. The first camp says that technology will tighten control mechanisms and aggravate the authoritarian atmosphere, and new forms of colonies will appear. This is the opinion of the radical dystopian camp. Offering different options ranging from the complete rejection of technology to the search for alternative technologies, the position of this camp, depending on the degree of their radicalism, essentially comes close to Kaczynski’s brand of anarchism.

The second camp believes that the thoughts expressed in the “Manifesto for an Accelerationist Politics” are more acceptable, real and reasonable for the new century. Proponents of this position call the idea of rejecting all technology anachronistic and backward. We should not turn away from technological innovation, but on the contrary, master it for our own purposes as best as possible, study it more deeply and analyze it more seriously. These new socialist, new leftist groups, gaining more and more supporters around the world, believe that new technologies can reform socialist planning models and make them a healthier alternative to capitalism. Simply put, it is impossible in our time to win over the younger generation with analytical nostalgia alone—by feeding them the reheated canned food of old discourses. The times calls for a renewal, an update. Regarding technology as a petty bourgeois entertainment, or, say, considering profitable areas of human activity such as engineering or medicine anti-revolutionary bourgeois professions is an outdated way of thinking that belongs in the last century. Oddly enough, I hear such outdated pronouncements not from people of the older generations, but from young leftists, while the opposite would be more understandable.

The leftists, the socialists, who agree with the logic of the “Manifesto for an Accelerationist Politics”, think that it is a great mistake to leave the field of technology to major capitalists.

Let me sum up this manifesto for you. The world is going through a very serious crisis, the climate system is collapsing, water and energy reserves are being depleted, and cold and hot wars are looming on the horizon. Continued financial crisis has led governments to switch to policies of austerity, wages are dropping, and mass unemployment is on the rise. As a result of automation in all areas of production, including intellectual labor, the concept of the middle class, even in its old meaning, will soon disappear. Current political models are powerless in the face of these ever-accelerating catastrophes. The future has been canceled in this paralysis of the political imagination. During the period of neoliberalism, many left-leaning parties lost both radical thinking and popular support. Unless an entirely new social, political, organizational and economic perspective is formed, the narrow-minded right-wing dictate will continue. Since the left cannot oppose this force with the old models, it undoubtedly needs radical renewal.

Accelerationists remind us that, as Marx put it, capitalism is an obstacle to itself. According to them, there is no need to deny the strengths of capitalism or destroy the material platform of neoliberalism. The existing infrastructure is not a capitalist stage to be smashed, but a springboard to launch towards post-capitalism. So far, no one knows exactly what technology will be capable of in the future. None of us knows what a modern technosocial body can do. Therefore, it is illogical to blindly oppose technology.

They say that they want to accelerate the process of technological evolution. But what they are arguing for is not techno-utopianism. Technology is not enough if it is not accompanied by socio-political action. Technology and the social are intimately bound up with one another, and changes in either potentiate and reinforce changes in the other. For techno-utopians, acceleration is an armor, a shield, while for accelerationists it is a weapon that leads us to victory.

The habitual tactics of marching, holding signs, and establishing temporary autonomous zones be an obstacle to achieving effective results. The slogan “At least we have done something” has become a cry of protest of the personal ego, rather than an effective action. The only criterion of a good tactic is whether it produces an effective outcome or not. We must stop fetishizing outdated forms of protest. If your opponents have developed immunity against your method of protest, it is no use repeating it. The modern left must refrain from repetitions that are useless for anything other than stroking their own ego.

Democracy cannot be defined simply by means of voting, discussion, or general assemblies. Real democracy must be defined by its goal. Politics must be aligned with the legacy of the Enlightenment, because we can only learn to rule ourselves by harnessing our ability to understand ourselves and our world (our social, technical, economic and psychological world).

Sectarianism is the death knell of the left as much as centralization is, and in this regard, accelerationists welcome experimentation with different tactics, even those they disagree with.

Accelerationists have three medium-term concrete goals. First, an intellectual infrastructure has to be built. Second, wide-scale media reform has to be constructed. In spite of the seeming democratization offered by the internet and social media, traditional media outlets remain crucial in the selection and framing of narratives. Bringing these bodies as close as possible to popular control is crucial to undoing the current presentation of the state of things. The third goal is to reconstitute various forms of class power. Such a reconstitution must seek to knit together a disparate array of partial proletarian identities, often embodied in post-Fordist forms of labor.

We must construct the future, say accelerationists. What accelerationism proposes is a future that is more modern, an alternative to the modernity that neoliberalism is unable to create.

I have tried to summarize this new way of thinking to the best of my ability, but if the manifesto itself and related texts are translated into the Azerbaijani language, it will be possible to draw more complete conclusions. In my opinion, the main thing here is to be open to innovation, otherwise this time the new century will pass us by.