You would be hard-pressed to find another prophet whose image gets recreated in the fine arts as much as that of Jesus Christ. European art boasts dozens of tableaux depicting various episodes of Jesus’s life, from his birth to his last days. 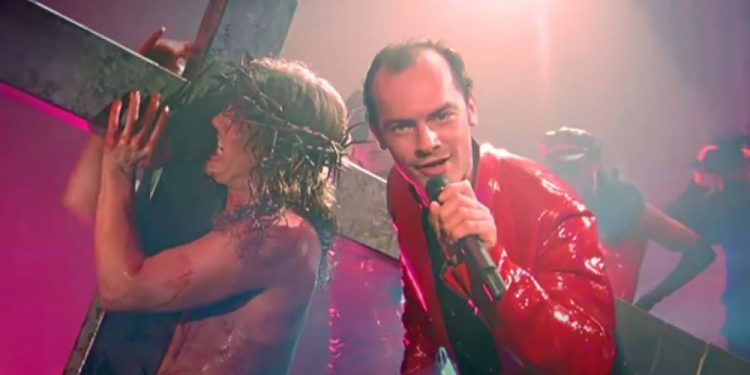 As a rule, these are paintings of the baby Jesus with the Blessed Virgin Mary, the scenes from the stories about Mary Magdalene and the apostles, paintings showing the depth of Jesus’s suffering and pain, Judas’s betrayal, Jesus bearing the cross, the crucifixion, the resurrection, and so on. In these works, spirituality, divinity and holiness are more important than the physical and real world.

This article is not about the traditional view of Jesus, but about some works of art and film, which take an unconventional approach to his figure and life story.

German artist Hans Holbein’s painting The Body of the Dead Christ in the Tomb (1521-22) depicts the body of Jesus in extremely realistic colors. The dead Jesus was usually shown as calm and majestic, his flesh clean, his body idealized and deified. For example, while in Raphael’s and Dirk Bouts’s works of the same name, Jesus appears bright, radiant, as if woken from sleep, Holbein paints Jesus without deifying him, depicting the cadaver as ghastly, horrific, likening him to an ordinary man: with bruises, wounds, marks of beating on his body and signs of decay, his eyes half-open and lifeless. 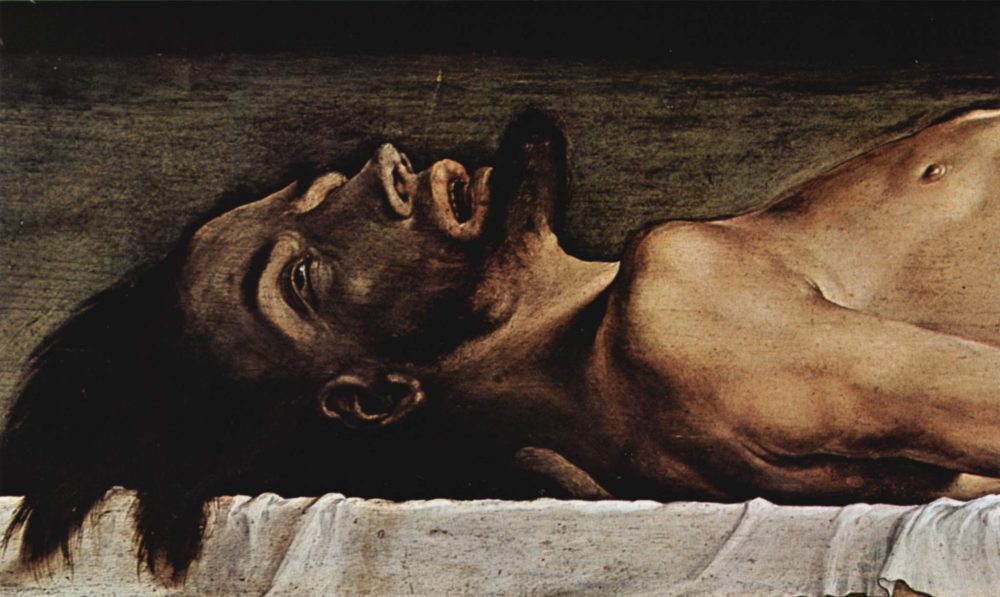 The painting is also mentioned in Dostoevsky’s novel The Idiot. The writer first saw it in Basel and was shaken. In one scene of the novel, Rogozhin and Myshkin talk about the painting. Rogozhin says he likes to look at it, while Myshkin, terrified by the idea, says that the painting could erode his faith.

Italian painter Caravaggio, a reformer of the 18th century art and one of the masters of the Baroque movement, also stepped away from the religious canons in his work, replacing saints with dead human beings, stripping images of perfection and bringing them closer to realism. 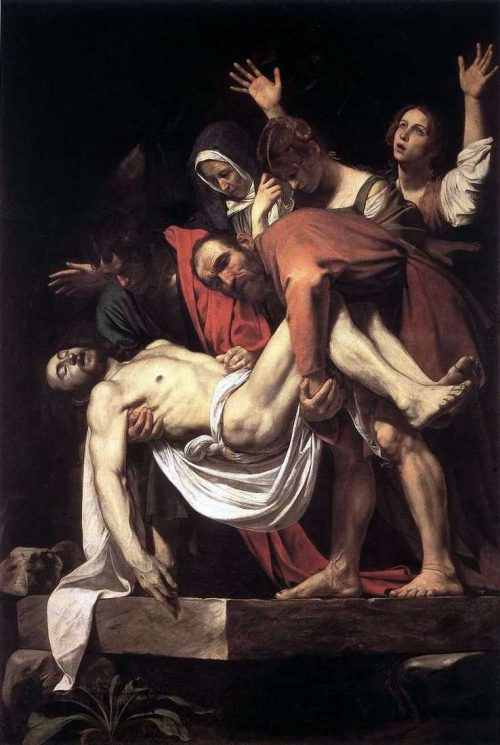 Caravaggio, The Entombment of Christ (1603)

One of Caravaggio’s masterpieces, The Entombment of Christ (1603), was rejected by the church for this reason. There are no landscapes or architectural elements in the background, but the foreground is emphasized and Jesus looks as if he is about to enter our reality. Religious people who did not accept the new naturalistic approach to Jesus regarded the painting as vulgar and disrespectful.

By the way, Mel Gibson used Caravaggio’s religion-themed art in his drama film The Passion of the Christ, especially the characters’ appearance and the chiaroscuro techniques.

Curious is the scene of the crucifixion in Paul Gauguin’s The Yellow Christ (1889). It takes place in the 19th century France. Silent, reserved villagers stand beside the crucified Jesus as if nothing had happened. Far in the background, there are other villagers, busy with their daily work. The predominance of yellow symbolizes joy and comfort. According to art critics, it seems that in this conflicting depiction, the artist showed the essence of the time in which he lived: indifference, forgetfulness.

Christ and the Woman Taken in Adultery (1917) by Max Beckmann, a German painter, who is considered a representative of the Expressionist “degenerate art” (the concept of “degenerate art” that emerged in Hitler’s Germany rejected modernist movements and regarded innovation in art as dangerous), caricatured the famous Biblical motif and Jesus. If one is not familiar with the story, it is impossible to tell that the central character is Jesus. In the author’s interpretation, Jesus is beardless and looks diabolical. 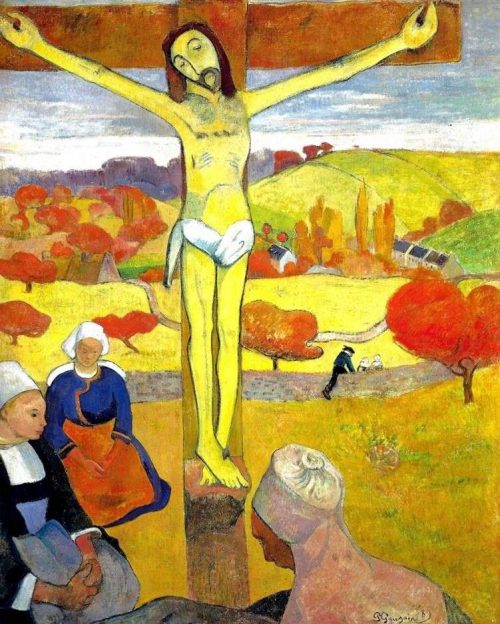 In White Crucifixion (1938), the Belarusian and French artist Marc Chagall points to Jesus’ Jewish identity by placing a tallit, Jewish traditional prayer shawl, on his head instead of a crown of thorns. The work embodies the suffering of the Jewish people, because in the year the painting was made, the Third Reich began the anti-Jewish pogroms in Germany. The November pogroms went down in history as the “Kristallnacht or the Night of Broken Glass.” White Crucifixion is one of Pope Francis’s favorite paintings.

Interesting, different interpretations of Jesus Christ’s personality have been made in the film art. Directors’ liberal treatment of Biblical texts and the image of Jesus have at times received a furious backlash from religious people.

One of the most controversial films is Martin Scorsese’s The Last Temptation of Christ, an adaptation of the novel by Greek writer Nikos Kazantzakis. The fate of Kazantzakis’s 1955 novel The Last Temptation itself was controversial, too, and Scorsese tried to preserve the spirit of the source material as much as possible. The plot contradicts the Gospels: Jesus building crosses for those opposing the Roman rule, watching Mary Magdalene, whom he fell in love with, as she has intimate relations with clients; the positive image of Judas; Jesus coming down from the cross, marrying Mary Magdalene, making love to her, becoming a father, etc.

However, the director tried to focus on something else. Realizing that he was the chosen one, Jesus is shown to be cowardly and skeptical, hesitant, because he is torn between love and war, prophecy and ordinary life. This passage in his monologue plays a key role in revealing his character: 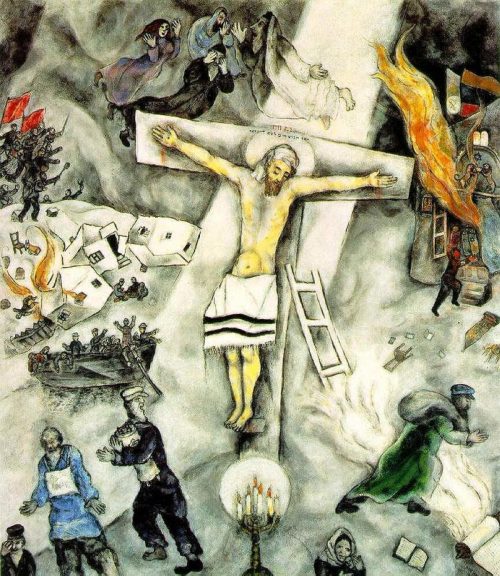 “I’m a liar. A hypocrite. I’m afraid of everything. When I see a woman, I blush and look away. I want her, but I don’t take her, for God, and that makes me proud. I don’t steal, I don’t fight, I don’t kill. Not because I don’t want to, but because I’m afraid. I want to rebel against you, against everything… against God, but I’m afraid. You want to know who my mother and father are? You want to know who my God is? Fear.”

At the time, there were protests against the director, who faced sharp criticism, and radical Christians stole copies of the film from some movie theaters. Several Christian organizations tried to buy the negatives from Universal to destroy them. One of the things that angered them was the fact that the role of Jesus Christ was played by Willem Defoe, who was known for his portrayal of villains.

Adapted from the rock opera of the same name by British composer Andrew Lloyd Webber, the film Jesus Christ Superstar (1973) directed by Canadian Norman Jewison does not change the Biblical story but portrays the prophet as a rock singer and adds modern elements to the plot. Soldiers with machine guns escort Jesus Christ to Calvary, and Judas is attacked by tanks. With the scene of Jesus destroying the stand with dollar bills, the director contrasts his struggle with American imperialism.

In Pier Paolo Pasolini’s The Gospel According to St. Matthew (1964), another rendition of the story of Jesus, the prophet is a leftist, but also somewhat aggressive, misanthropic and rebellious. Despite being an atheist, Pasolini’s involvement in the subject of religion came as a surprise to many. Earlier, in 1963, his short film La Ricotta caused a great deal of controversy and the director was arrested for its insulting and immoral content. 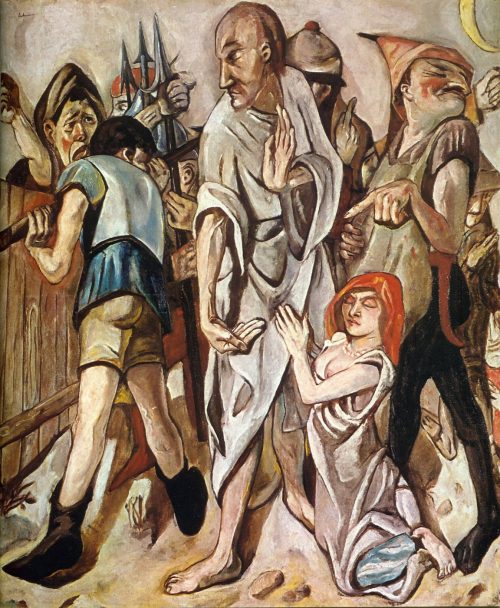 Max Beckmann, Christ and the Woman Taken in Adultery (1917)

The story takes place on a film set. A poor actor playing the role of the second thief, who will be crucified with Jesus, gives his food to his family and goes hungry all day. Finally, he is lucky enough to get some curd cheese and bread. The film crew, holding the actor at the table, mocks him, throwing food in front of the man and forcing him to eat, until, playing his role, the actor dies on the scene of the crucifixion. Through this, Pasolini exposes the society that outwardly adheres to Christian values, while being hypocritical and corrupted at its core.

At that time, Pope John XXIII stressed the importance of the church’s new approach to contemporary art, calling for a new dialogue with artists. Pasolini, who joined the call, even attended a seminar at a monastery in Assisi. That was where the idea for The Gospel According to St. Matthew was born. When asked, “Why did you make this film if you are an unbeliever?”, he said, “I may be an unbeliever, but I am an unbeliever who has a nostalgia for a belief.”

Unlike previous films about Jesus, The Gospel According to St. Matthew was shot in a neorealist aesthetic. The dialogue is taken directly from the Gospel of Matthew, because the director believed that “images could never reach the poetic heights of the text.”

The lead role was played by a non-professional actor, a 19-year-old student, communist Enrique Irazoqui. They say that Pazolini even wanted to invite Russian poet Yevgeny Yevtushenko to play Jesus. As mentioned earlier, in the director’s interpretation, Jesus is a leftist, a tribune of the proletariat. He is a revolutionary. The film features revolutionary Russian and Italian songs. This is Pasolini arguing with the church, which has monopolized the figure of Jesus. Be as it may, the Vatican City newspaper L’Osservatore Romano called The Gospel According to St. Matthew the best film on Christ ever made.

Hal Hartley, one of the lesser-known American independent filmmakers, freely interpreted the Biblical texts in his fantasy comedy The Book of Life (1998). It is set in modern times: Jesus Christ shows up in a suit with a laptop in his hand, Mary Magdalene represents subculture, and Satan drinks beer in a bar. On the eve of the year 2000, Jesus has a day to decide whether the Apocalypse will take place in a world that has been driven crazy by computerization. In general, the film has anti-Christian undertones.

The latest controversial film featuring Jesus is the comedy The First Temptation of Christ (2019), released on Netflix. The film was produced by the Youtube channel Porta dos Fundos, created by a group of Brazilian comedians, directors and screenwriters in 2012. 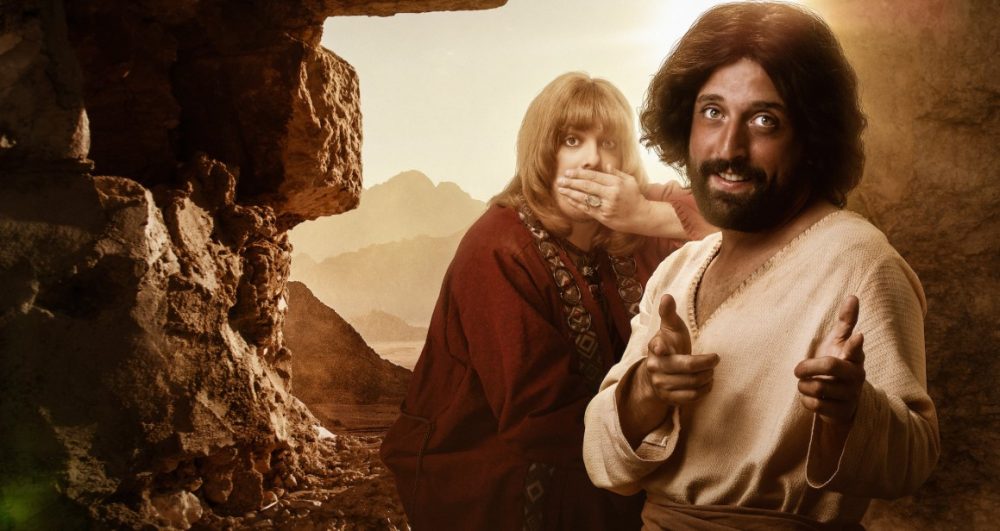 The First Temptation of Christ (2019)

In the plot, Jesus returns home after spending 40 days in the desert with his boyfriend Orlando. His mother, Mary, his father, Joseph, and God, whom he believes to be his uncle, welcome him with a surprise party to celebrate his 30th birthday. He introduces Orlando to his family. At the party, Jesus is told that God is his real father. Jesus goes back to his room, smokes a joint and sees Shiva, Buddha, and other deities. In the end, it turns out that Orlando is the Devil, and Jesus destroys him.

Christian communities, who found the film insulting, demanded that it be removed from Netflix. Neftlix claims that there is nothing insulting in the film. Fabio Porchat, the actor playing Orlando, called the public reaction homophobic: “The film does not claim that Jesus is gay. We play at insinuating that Jesus has a new friend, and probably this new friend is gay, but they have just been having fun and a very good time in the desert for 40 days. If anybody should be angry with us, it should be the gay community because a gay character turns out to be the Devil.”

In January 2020, a Brazilian court ordered Netflix to remove the film from the platform.

It should be noted that in its sketches, Porta dos Fundos also satirically targets corruption and drug trafficking.