According to Kyiv newspapers, at the Eastern Partnership summit in Brussels on 15 December 2021, Ukrainian President Volodymyr Zelenskyy invited President of Azerbaijan Ilham Aliyev to come to Ukraine on a working visit. 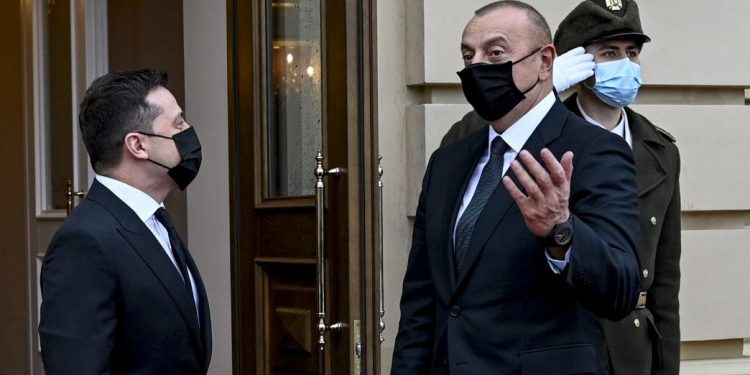 The Ukrainian leader also suggested that since February 2022 will mark the 30th anniversary of the establishment of diplomatic relations between Ukraine and Azerbaijan and Turkey, a summit of the leaders of the three states should be held in Kyiv.

Of course, at the end of last year, it was impossible to predict the events in Kazakhstan, although the general tension in relations between Russia and the West continued to grow. There were also many signs that some kind of aggravation between Azerbaijan and Armenia was to be expected. Nevertheless, the quick acceptance of Zelenskyy’s invitation by his Azerbaijani counterpart was not least due to the events in question and the general dynamics of international relations from Central Asia through the Black Sea-Caspian Sea region to the shores of the English Channel.

Upon the conclusion of the talks between the leaders of Ukraine and Azerbaijan, their success in trade and economic spheres was particularly emphasized. It is quite obvious. Relations between Kyiv and Baku have always remained warm and friendly. Ukraine came to Azerbaijan’s rescue by delivering arms during the most critical periods of the war in Karabakh in the 1990s, as President Heydar Aliyev told this author in an interview. Not surprisingly, the parties intend to develop their cooperation in many areas for mutual benefit. This is evidenced by the agreements signed. As the Ambassador of Azerbaijan to Ukraine Elmira Akhundova said, “the brief, but very productive visit of our head of state to Kyiv confirmed the strategic level of partnership between our friendly countries, gave it an additional impetus and raised our relations to a fundamentally new level.”

For all the importance of trade and economic relations, it is still worth highlighting the political aspects of the visit. They go far beyond its scope, and, understandably, Moscow took a particular interest in them.

Note the concurrence of two events, the CSTO intervention in Kazakhstan with the leading role of Russia and the aggravation on the Armenian-Azerbaijani border.

Baku is well aware that this timing could not be accidental. And in order to cool down the hot heads not only in Yerevan, but also in Moscow, President Aliyev made it clear that “apparently, they (in Armenia—auth.) count on [CSTO] assistance, but let them remember that no one can stop us, like it happened in the Second Karabakh War. The only thing stopping us is that we don’t want a third war.”

The Azerbaijani capital showed some patience and restraint regarding Moscow’s actions in Karabakh and in the South Caucasus in general for a while. However, once again we saw that the Kremlin perceives this as a weakness—hence the increasingly brazen behavior of the so-called Russian peacekeepers.

Clearly, Russia did not intend to withdraw its troops from Kazakhstan and expects to extend similar behavior to Karabakh. However, it had to get out of the Central Asian country, for whatever reason, so the South Caucasus and, in a broader sense, the Caspian region takes on strategic importance for the Kremlin.

Both Ukraine and Azerbaijan need to seek adequate response to Russia’s creeping aggression. And in this regard, the results of Aliyev’s visit to Kyiv can hardly be overestimated. During the meeting the Azerbaijani leader said that he fully supported the territorial integrity of Ukraine and did not consider Crimea to be a part of Russia.

In turn, the Ukrainian leader said, summing up the visit, that they “have signed the Joint Declaration of the Presidents of Ukraine and Azerbaijan. It enshrines readiness to provide mutual support to the sovereignty and territorial integrity of our states within the internationally recognized borders, joint efforts to counter hybrid threats, the commitment to ensure peace and stability in the Black Sea-Caspian Sea region and beyond.”

It follows from the above that Baku and Kyiv are looking for a joint response to the strengthening of Russia’s military component in the Black and Caspian Seas. The Ankara-Baku-Kyiv axis, albeit informal so far, is taking shape. In combination with the general strengthening of the eastern flank of NATO, it offers an opportunity to counter Moscow and its so-called allies, both within the CSTO and outside of it, to some extent.

For obvious reasons, the Russian capital was not happy about Aliyev’s visit to Kyiv and even less so about its results. The Azerbaijani president’s unambiguous statement on Crimea shows the real limitations of Russian policy, which, through a fault of its own, is facing ever-increasing opposition.

Having just seized Kazakhstan for the time being, Moscow understands that Turkey will continue to move toward the Turkic states of Central Asia and said strategic axis will allow it to focus precisely on the direction of Turan. The whole of Central Asia is Russia’s soft underbelly, to say nothing of the South Caucasus. Moscow cannot simply walk away from these regions, as this would mean not just a defeat, but a geopolitical disaster with unclear consequences for the Russian state. That is why we should expect military and political counter-moves from Moscow in the very near future.

There are three important factors at play here. First. The West has made it clear that it is ready for any action by Russia, including aggression against Ukraine in any form. Should Moscow decide to recreate the Cuban Missile Crisis by placing missiles in Venezuela, Cuba, or Nicaragua, which is doubtful, it will receive a harsh response in the form of devastating sanctions immediately and without hesitation. So, Moscow will think twice before undertaking something like this.

Second. It becomes increasingly difficult to use Armenia for provocations against Azerbaijan, because this may lead to a major war with Turkey’s involvement. Russia is unlikely to go for that, given the possible blocking of the Straits and the ensuing consequences. In other words, some skirmishes are possible, but on a very limited scale. Just to keep Baku on its toes. We will not speculate as to how long Azerbaijan will tolerate this state of affairs.

Third. Moscow will try to strengthen its cooperation with Iran to counterbalance Turkey. However, it is not very clear whether Tehran is ready for that. And why would it want a conflict with Ankara for the sake of Russian interests? All the more so since Iran is very unhappy with Russia’s behavior in Syria and there is growing frustration with the actions of Russian troops there.

All of this fits into the framework of the Azerbaijani President’s visit to Ukraine. As he said, “I would like to say once again that our cooperation is based on friendly relations, and I do hope that this visit at the beginning of the year will serve to finish this year with good results on a bilateral level and will become a good basis for the future.” This is completely consistent with the aspirations of the Azerbaijani and the Ukrainian peoples.