A high-functioning Middle Corridor would give the whole of Europe resilient and diversified supply chains. 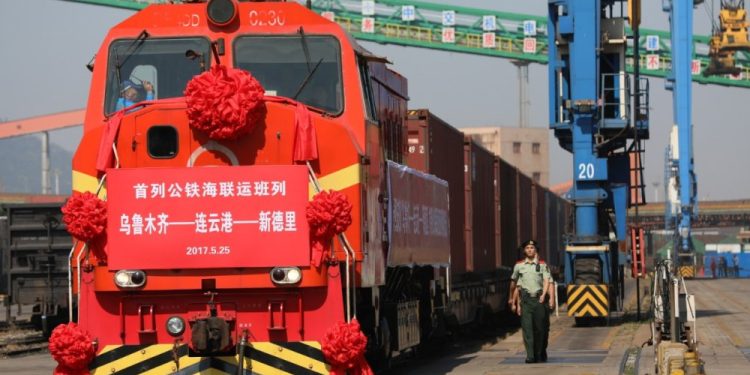 Russian president Vladimir Putin’s invasion of Ukraine sent Europeans scrambling to find alternative suppliers of natural gas and severely disrupted commodity supply chains between Europe and Asia. To reduce their dependence on Russia and China and the increasing likelihood of disruptions from confrontations with one or the other, Europeans must now think outside the box and seek new ways to regain energy security and diversify international land freight lines.

One promising alternative is to push export and energy connections through the “Middle Corridor,” which runs from Europe to Kazakhstan, the Caspian Sea, Azerbaijan, and Georgia, and from there, via the Black Sea, to Turkey. The Middle Corridor, officially known as the Trans-Caspian International Transport Route (TITR), could serve the Europeans just as well as the Russian-controlled Northern Corridor, which until recently was the preferred route for rail freight between the European Union and Asia.

China had hoped to monopolize the Middle Corridor as part of its expanding Belt and Road Initiative (BRI). But countries have grown increasingly wary of participating in it. They’ve seen China leave many of its BRI promises unfulfilled. And they also worry that involvement comes with too many geopolitical strings attached and can lead to debt traps.

The Middle Corridor might never be the cheapest transport route, but in an increasingly raucous world where diversifying supply chains reduce risk, it could be viable and cost-effective.

That said, there are challenges.

There is no customs union, joint tariff coordination, or transnational digital integration among Middle Corridor nations. Nor is there sufficient infrastructure to accommodate the volume of goods handled by the northern route. For example, current infrastructure can accommodate only about 5 percent of the intercontinental rail trade.

Further, the Middle Corridor is a more complicated route. It requires sea transfer hubs for goods to cross the Caspian and the Black Seas. This will doubtless increase costs and lengthen delivery times. But progress is being made.

In late March, Azerbaijan, Georgia, Kazakhstan, and Turkey issued a joint statement to harmonize freight rates and provide a unified cyber platform to automate freight services. In May, Turkey and Kazakhstan signed a strategic partnership agreement, focusing on the flat-rate carriage of wagons and containers along the Middle Corridor via the new Baku-Tbilisi-Kars rail network. Finally, with the June 27 Baku Declaration, Turkey, Azerbaijan, and Kazakhstan agreed that this trans-Caucasian transport corridor would benefit from greater customs cooperation and accessible transit of goods along the Middle Corridor route.

Turkey plays a central role in the geopolitical equation of the Middle Corridor, which expands its influence in Central Asia following Azerbaijan’s second war in Nagorno-Karabakh. Azerbaijan’s geographic position favors Ankara’s projections to enhance China’s interconnectivity with Europe. However, both Russia and Iran still have greater economic and military leverage over Central Asian states than Turkey does.

That said, post-Soviet Central Asian states that fear Russia are eager to diversify their foreign partnerships. And Communist China is always eager to expand its economic networks.

The traditional Silk Road was never a static corridor, and modern China is even more ambitious under President Xi Jinping. The fluid nature of Chinese foreign policy encourages investment in alternative trade routes, adapting to opportunities, and avoiding geopolitical dangers. As a consequence, the BRI is dynamic. If Beijing makes a strong bid to develop the Middle Corridor, the states of Central Asia and the South Caucasus may become dependent on China as Russia’s influence weakens.

As long as Russia can hold geopolitical control over the region, however, China will act cautiously. It has no desire to fall out with Moscow. For this reason, Xi will follow a dual policy: maintaining an economic and political friendship with Vladimir Putin, while taking advantage of Russia’s post-invasion weakness to advance its interests in Central Asia.

The West must not be idle bystanders. The Middle Corridor countries are skeptical of China’s intentions and this could provide new partnership opportunities for the United States and Europe.

It is unclear to what extent some European economies perceive the Middle Corridor as an opportunity. But the Three Seas Initiative requires more American and European commitment to counterbalance China’s geoeconomic offensive and connect the Caucasus with the West.

It is crucial for Europe that significant investment and infrastructure projects aim at removing geopolitical vulnerabilities, instead of accumulating them. The Three Seas Initiative represents a political alternative to the supply chain flows dominated by authoritarian regimes.

Before the Russian invasion of Ukraine, the European Union (EU) declared its intention to expand the Trans-European Transport Network (TEN-T) toward the Eastern Partnership states. The main thrust was to develop the transport capacities of Georgia and Azerbaijan. In its July 2021 Economic and Investment Plan, the EU also allocated financial assistance to strengthen the digital transport corridor in the Caspian Sea and connectivity to the Black Sea.

Romania is a strategic partner of the United States and has proven to be a reliable and active ally on NATO’s eastern flank. With Western support to increase its railway and road capacities, Romania could become a vital commercial and military hub on the Black Sea, connecting the Caucasus and Ukraine to the rest of Europe.

The postwar reconstruction of Ukraine, coordinated under the Three Seas Initiative, could integrate the functional core of Europe, from Poland through Romania. This would strengthen regional security and promote economic and political stability between the Black and the Baltic Seas.

That effort, paired with working for a “free and open” Black Sea and a high-functioning Middle Corridor, would give the whole of Europe resilient and diversified supply chains. It is a recipe for prosperity and stability—and an opportunity that the West should not let pass.

Silviu Nate is an associate professor at Lucian Blaga University of Sibiu and director of its Global Studies Center.

James Jay Carafano is a Heritage Foundation vice president and director of the think tank’s research on matters of national security and foreign relations.