Turkey and Russia have escalated their competing quests for influence among the resource-rich former Soviet states of Central Asia, a complex geopolitical region that has also drawn the attention of China and the U.S. 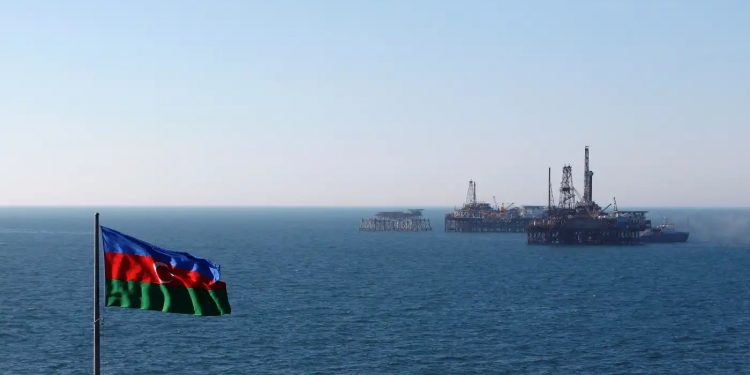 An Azerbaijani flag on an oil platform in the Caspian Sea: Azerbaijan and Turkmenistan reached a deal in January to jointly develop a Caspian Sea oil field.

In a virtual summit late last month of the Cooperation Council of Turkic-Speaking States, also known as the Turkic Council, Turkish President Recep Tayyip Erdogan argued for formally upgrading the group to an international organization, citing its “significant international prestige.”

Turkey supported the Azerbaijani military in its six-week war last fall in the disputed region of Nagorno-Karabakh, helping to ensure victory over Armenia and cement Ankara’s leadership in the region.

Erdogan has capitalized on this opportunity to go on the diplomatic offensive with other Turkic-speaking nations in Central Asia. A number of these countries, still on shaky economic and political ground three decades after the fall of the Soviet Union, are counting on Turkey’s help to shore them up.

Turkmenistan figures prominently in the power struggle. Ankara has been leaning on the “permanently neutral” country to join the Turkic Council, angling to boost the council’s international profile, and also appears to have its sights set on the the vast oil and natural gas reserves of the Caspian Sea.

Azerbaijan and Turkmenistan, which had clashed over ownership of an undersea oil and gas field there since the end of the Soviet Union, reached a historic agreement on joint development in January. Turkey thereafter quickly proposed participating in joint energy development projects and offered to export oil and gas through its pipelines, seeking to become a hub for energy transportation.

Meanwhile, Russia is scrambling to cozy up to Turkmenistan as well.

A Russian-Turkmen economic commission held a meeting late last month that covered topics including a program of bilateral cooperation through 2023. The body notably includes the son of Turkmenistan President Gurbanguly Berdymukhamedov, who is expected to succeed him and was named deputy prime minister in February. The chiefs of staff of the two countries’ militaries met April 1 to discuss closer technical cooperation.

Turkmenistan is economically dependent on China, earning the bulk of its revenue from natural gas imports there. By building closer ties with Ashgabat, Moscow looks to curb Beijing’s growing sway in Central Asia, evident in the Belt and Road infrastructure initiative.

Russia is also wary of Europe and the U.S. making their way into the region. “The Americans and Europe are very active – but the Americans are especially active – in Central Asia,” Russian Foreign Minister Sergey Lavrov said last week in an interview with a state-run broadcaster. “They are trying to create their own formats such as C5+1.”

“The volume of economic ties that the U.S. and the EU are now building with Central Asia is still incomparable with our economic interpenetration,” he added. “But they are pursuing an unambiguous goal to weaken our ties with our allies and strategic partners in every possible way.”

As other ex-Soviet states such as Ukraine and Moldova distance themselves from Russia, Moscow looks to keep Central Asia, which has many authoritarian leaders likely to be sympathetic to it, within its orbit.

The Russia-led Commonwealth of Independent States — a regional organization of former Soviet republics that includes all members of the Turkic Council besides Turkey — met last week in Moscow. Lavrov told reporters after the event that members had agreed to work together more closely on the international stage.

With Azerbaijan, Kazakhstan, Uzbekistan and Kyrgyzstan among its members, the council aims to promote cooperation among nations with close ethnic, cultural, historic and linguistic ties.

It is also a key vehicle for Ankara to build closer relationships with these countries in its tug of war with Russia, which essentially controlled them during the Soviet era and has not taken kindly to a NATO member looking to expand its influence in Moscow’s backyard.