Western pundits spend a great deal of time trying to determine “who lost Turkey.” Ankara’s relations with the West are indeed tense, but there will be no severing of ties or withdrawal from NATO. Ankara is attempting a balancing act in which it diversifies its external ties to include Eurasia rather than remain anchored solely to the West. 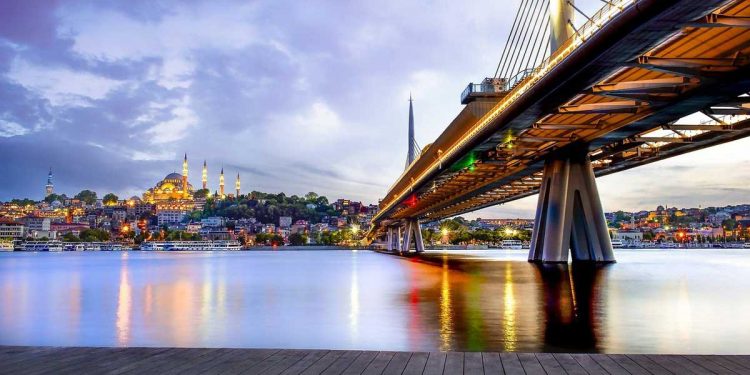 It is often claimed that Turkey made a definitive break with the West in 2003 when the Justice and Development Party (AKP) came to power. The argument is that by changing direction internally, Ankara turned away from what the West was hoping to achieve in terms of its relations with Turkey.

Since 2003, Turkey has indeed increased its influence in all the geopolitically important regions on its borders: the Black Sea, the South Caucasus, the Balkans, the Mediterranean, and Syria-Iraq. A general concept explaining this development can be found by looking at the map. There is no single great power in Turkey’s neighborhood, which opens the door for greater Turkish economic and military engagement along its borders. Even Russia, arguably the biggest power in the neighborhood, could not prevent Turkey from giving its decisive support to Azerbaijan during the recent Second Karabakh War. Turkish troops are now stationed on Azerbaijani soil alongside Russian.

The real reason for Turkey’s ever-increasing engagement remains the Soviet collapse, though that engagement occurred over a longer period than many analysts expected. It took decades for Turkey to build its regional position. In 2021, it can safely be argued that Ankara has made a success of this venture.  It has achieved a direct land corridor to the Caspian Sea (through Azerbaijan’s Nakhchivan) and increased its military posture in the Mediterranean, and views northern Syria and Iraq as territories that can potentially provide strategic depth for Anatolian defense.

A revealing element in Ankara’s foreign policy is that geography still commands the country’s perception of itself and its place in the world, perhaps more so than for any other large country. Rather than being attached solely to the Western axis, over the past two decades Turkey has pursued a multi-vector approach to foreign affairs.

The country is on the European periphery. Its experience is similar to Russia’s in that both have absorbed extensive western influence, whether in institutions, foreign policy, or culture. Both have been anchored for centuries on the geopolitics of the European continent. Because a multi-vector foreign policy model provides more room for maneuver, economic gains, and growth of geopolitical power, both countries wanted to break free of their single-axis approach to foreign policy.

But neither Turkey nor Russia has had an opportunity to break its dependence on the West entirely. The West has simply been too powerful. The world economy revolves around the European continent and the US.

Both states have significant territories deep in Asia or the Middle East, as well as geopolitical schools of thought that consider Europe-oriented geopolitical thinking contrary to state interests—particularly as the collective West has never considered either Turkey or Russia to be fully European. The two states have always pursued alternate geopolitical anchors, but had difficulty implementing them. No Asian, African, or any other geopolitical pole has proven sufficient to enable either Turkey or Russia to balance the West.

No wonder, then, that over the past two decades Turkey has been actively searching for new geopolitical axes. For Ankara, close relations with Russia—lamented by Western observers—is a means to balance its historical dependence on European geopolitics. The same foreign policy model can explain Moscow’s geopolitical thinking since the late 2000s, when its ties with Asian states developed quickly as an alternative to a dependence on, and attachment to, Western geopolitics.

Thus we come to the first myth of Turkish foreign policy: that Ankara is distancing itself from the West with the aim of eventually breaking those ties entirely. Breaking off relations with NATO is not an option for Turkey. Its goal is to balance its deep ties with the West, which were not producing the benefits it was hoping for, with a more active policy in other regions. Hence Turkey’s resurgence in the Middle East.

Turkey’s Middle East pivot (championed by former FM Ahmet Davutoglu) is not an exceptional development in the country’s foreign policy. During the Cold War, when Turkey’s focus on the Western axis was strong, leftist PM Bulent Ecevit promoted the idea of a “region-centric” foreign policy. The main takeaway was that Ankara should pursue diversification of external affairs beyond its traditional Western fixation, meaning deeper involvement in the Middle East and the Balkans. In 1974-1975, then Turkish deputy PM Necmettin Erbakan tried to pivot Ankara toward the Arab world. There were even attempts to build closer ties with the Soviets.

But throughout this period of reorientation, no move was ever made to sever relations with the West. Turkish politicians at the time believed diversification of foreign ties would benefit the country’s position at the periphery of Europe overlooking the volatile Middle East. The diversification would not hurt the country’s Western axis but would in fact complement it.

Contrary to the belief that Atatürk was solely interested in Turkey’s Western axis, the country under his leadership had close ties with nearby Middle Eastern states, as was necessary considering the geopolitical weight of those states at the time. Thus he hosted Iran’s Shah Reza Pahlavi in 1934, and in 1937 signed a non-aggression pact with Iran, Iraq, and Afghanistan.

The pursuit of a multi-vector foreign policy has been a hallmark of Turkish political thinking. Even during Ottoman times, when a Europe-centered foreign policy was inescapable, the sultans sought alternatives to their dependence on Great Britain and France. Following the disastrous 1877-1878 war with Russia, Sultan Abdul Hamid began a cautious balancing effort by building closer ties with Imperial Germany—a trend that contributed to the German-Turkish alliance forged during WWI.

Returning to the present day, the Chinese factor is causing a reconfiguration in Turkey-West relations. The Asian pivot brings economic promise and increases Ankara’s maneuverability vis-à-vis larger powers like Russia and the EU. This fits into the rise of Turkish “Eurasianism,” the aspirations of which are similar to those that have motivated Russia for the past decade or so.

Turkey’s policies toward the West and the ongoing troubles in bilateral ties can best be described as intra-alliance opposition rather than an effort to break free of the West. Through various means, Turkey is striving to increase its position within NATO. It is true that in recent years, Turkey’s opposition to the West within the alliance has intensified markedly, but it has not passed the point of no return. Ankara is well aware that it remains a valuable ally to the collective West. While it may appear to be purposefully alienating itself from the West, there is more to the story.