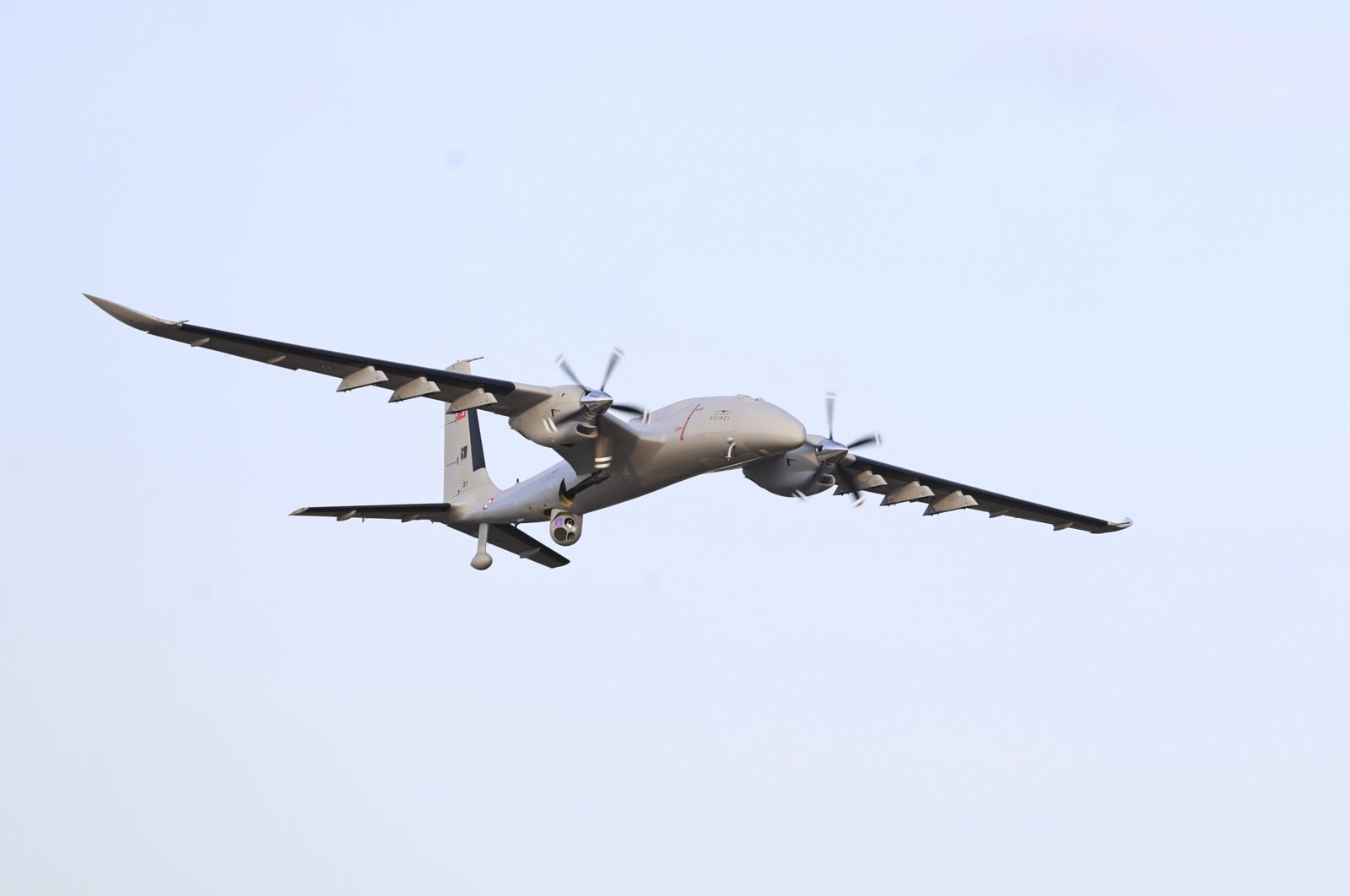 An Akıncı UCAV conducts a flight above the Akıncı Flight Training and Test Center in the Çorlu district of Tekirdağ province, northwestern Turkey, Aug. 29, 2021. (AA Photo)

The Akıncı unmanned combat aerial vehicle (UCAV) will be put on display at Teknofest in Azerbaijan this week, marking the first edition abroad for one of the world’s biggest aviation, space and technology festivals.

Two Akıncı drones took off from northwestern Tekirdağ’s Çorlu district on Saturday, one in the morning and the other in the afternoon hours, and traveled through Turkey and Georgia before they landed at Heydar Aliyev International Airport in Baku, the developer, Baykar, said.

Covering a distance of around 2,000 kilometers, the UCAVs thus completed a five-hour flight as they traveled through three countries, a first in Turkish aviation history.

Along with other cutting-edge defense and technology products developed by Turkish companies, Akıncı will meet aerospace and tech enthusiasts in Baku during the Teknofest that will be held from May 26 through May 29.

The event has become Turkey’s gathering venue for all stakeholders in aerospace and technology, from firms to students, since its first edition back in 2018. It will host a range of activities, from air shows with warplanes, unmanned aerial vehicles (UAVs) and helicopters, to seminars, summits, competitions and fairs.

Besides drone magnate and Akıncı developer Baykar, many other pioneers, including Aselsan, Havelsan, Roketsan, STM, Turkish Aerospace Industries (TAI) and its engine manufacturing subsidiary, TUSAŞ Engine Industries (TEI), will be showcasing their vehicles and equipment during the festival.

Organized by the T3 Foundation and the Industry and Technology Ministry, Teknofest has been held in various Turkish cities in even years and in the metropolis of Istanbul in odd years.

Marking the most advanced and sophisticated drone built by the country, Akıncı was first delivered to the Turkish security forces in late August last year.

The UCAV joined the company’s Bayraktar TB2, which has been widely used and sold to various countries, including Ukraine, Qatar, Azerbaijan and Poland.

Six Akıncı drones have entered the inventory so far and have been actively used by the Turkish Armed Forces (TSK). They had joined their first major operation ever last month as Turkey launched a military offensive against the PKK terrorist targets in northern Iraq.

Akıncı is longer and wider than the Bayraktar TB2 and can perform strategic tasks. It has a 20-meter (65-foot) wingspan with its unique twisted-wing structure and is equipped with fully automatic flight control and a triple-redundant autopilot system.

It can carry various weaponry, including a range of missiles such as Smart Micro Munitions (MAM-L) developed by prominent Turkish contractor Roketsan. It can be equipped with the locally produced active electronically scanned array (AESA) radar and air-to-air missiles Gökdoğan (Merlin) and Bozdoğan (Peregrine).

It is also able to launch several other types of locally made munitions, such as the Roketsan-built Stand-Off Missile (SOM), a long-range air-to-surface cruise missile that can hit targets up to 150 miles (240 kilometers) away.

Baykar says the Akıncı can attack targets both in the air and on the ground. It can also operate alongside fighter jets and fly higher and stay in the air longer than Turkey’s existing drones.

Akıncı, late last month, conducted the first live firing at a sea target in a test that saw it hit an aim using a TEBER MK-82 guidance kit. It was said to have hit the target after a Bayraktar TB2 performed the laser designation on the target. Akıncı reportedly dropped an MK-82 bomb from an altitude of 20,000 feet onto a floating target.

Bayraktar TB2 earned worldwide fame following its deployment in conflicts in Syria, Libya and Karabakh, previously referred to as Nagorno-Karabakh. It has been sold to nearly 20 countries so far, with many other nations expressing interest in buying the drone.

Its upgraded version is expected to perform its maiden flight this year. Currently, under development at the Baykar facilities, the Bayraktar TB3 will be able to take off and land at Turkey’s flagship-to-be amphibious assault ship TCG Anadolu.

Baykar has also completed an export deal for the Akıncı with two countries. According to the company, deliveries are aimed to be made periodically starting from 2023.