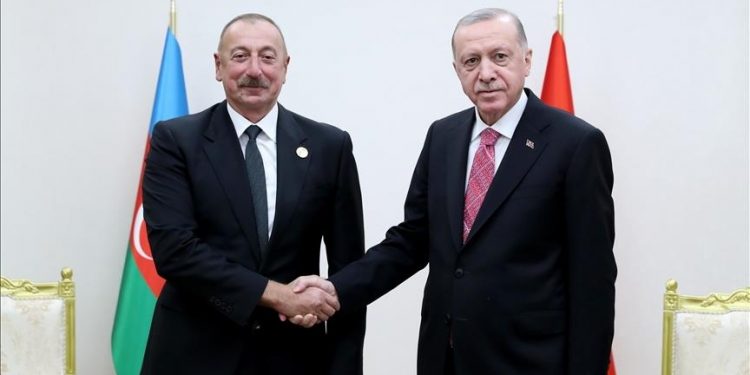 Erdogan also sent a video message to a TV program broadcast on Azerbaijan’s AZTV on the occasion.

“I wholeheartedly congratulate the dear President of Azerbaijan, my dear brother, Mr. Ilham Aliyev, on the occasion of his name day,” Erdogan said.

Under Aliyev’s leadership, Erdogan said, Azerbaijan won an “epic victory” in its just effort to end the nearly 30-year Armenian occupation of the Nagorno-Karabakh region in only 44 days.

Noting that Aliyev made great efforts to develop relations between Ankara and Baku in every field, Erdogan added that the Azerbaijani president’s “sincerity” has contributed greatly to “the fact that the brotherhood between our countries is at its peak.”

“Hopefully in the coming period, the connection between Nakhchivan and the rest of Azerbaijan will be established, and the two brothers will embrace once again,” Erdogan said, referring to the Nakchivan autonomous exclave to the west of Azerbaijan.

Nakhcivan is set to be connected to western Azerbaijan by the Zangezur corridor to be built in the wake of last year’s Nagorno-Karabakh conflict, in which Azerbaijan liberated some 300 settlements from Armenian occupation.

“Thanks to all these joint steps and projects, the quality of Turkey-Azerbaijan cooperation as a guarantee of regional prosperity and stability will be strengthened,” he added.