UNESCO turned into an elite brothel

UNESCO, like the entire UN system under Antonio Guterres, is falling apart in corruption and fraud. This is the conclusion Inner City Press makes, revealing the alarming situation with the UNESCO, headed by Frenchwoman Audrey Azoulay since 2017. 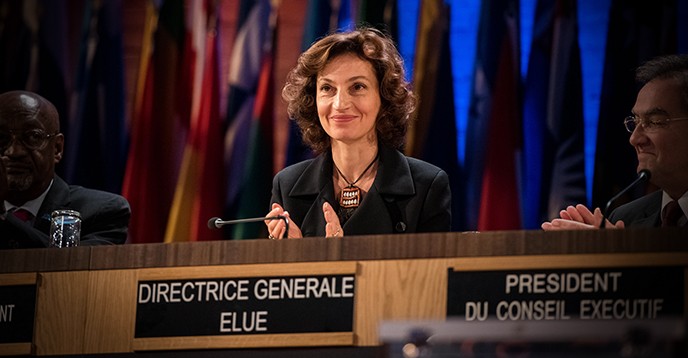 Since the beginning of her mandate, Azoulay and her team have treated the organization as her private shop or family property

Since the very beginning of her mandate following the completely unexpected election results, Azoulay and her team have been treating the organization as her private shop or family property.  Until recently, however, there has been no serious effort from member states to rectify this situation, although it has occurred in other UN agencies.

Still, the Inner City Press analysis of gross violations of protocol in the work of the UNESCO Director-General resulted in official criticism by representatives of several member states at the last, 215th, session of the Executive Board, held from October 5 to 19, 2022.

It seems that the agency’s Executive Board was aware that the “critical mass” of discontent against the methods of the Director-General of UNESCO would sooner or later result in relevant organizational conclusions. That is why, under the instructions of Audrey Azoulay, the Office of Internal Oversight Services director has done everything to slow down the procedure discussed by member states on the “UNESCO procedure of investigation of allegations against the Director-General”.

It looks like there has been some progress, and today we can assume that Azoulay will have to part with her mandate. And, judging by the signals coming from a number of UN member states, it will not be a friendly parting.

This time, criticism of Audrey Azoulay’s corrupt management style and the legitimate demands of a number of respected UN member states to rectify this outrageous situation met with no opposition from the traditional advocates of the UNESCO Director-General. On the contrary, a resolution was adopted on her personal responsibility for decisions that blatantly undermine the financial discipline of this UN agency, which appears to have delivered the final blow to Azoulay’s corrupt administration.

“This session of the Executive Board signaled the beginning of the end-of-term period for the Azoulay administration,” said a senior official of the organization. “This is unprecedented, as normally open criticism from member states usually comes only a few months before the incumbent Director-General leaves office. In the case of DG Azoulay, her lame duck period will last at least two more years. This is very unusual, but it reflects the irritation of influential ambassadors.”

Quoted below are excerpts from the speech of the Permanent Representative of Turkey to UNESCO, Gülnur Aybet, at the opening of the 215th session of the Executive Board. Aybet in particular requested Audrey Azoulay to “improve the communication between the Director-General and the permanent delegations” and emphasized the “importance of speed and timing” since Azoulay’s office is very slow. According to Turkey’s permanent representative, it is “extremely difficult to schedule an appointment directly with the DG herself” and this is becoming the “emerging norm”.

The ambassador also said that the problems of “timing and level of response” of Azoulay’s office are appearing across the board and this obstruction seems to be “systematic and structural”. Gülnur Aybet also did a “timely and gentle reminder that intergovernmental organizations like UNESCO are made up of member states and the Secretariat is accountable to member states”, not the other way around.

The word “accountability”, thrown in the face of Audrey Azoulay by Turkey’s representative, elicited a storm of applause from the audience, which sounded like a unanimous call for the early termination of the UNESCO Director-General’s term of office.

And even “love patronage”

At the end of the session, many participants expressed bewilderment at the strange behavior of Serbian Tamara Rastovac Siamashvili, Chair of the UNESCO Executive Board, who tried to interrupt the applause that was humiliating for Audrey Azoulay. It turns out that shortly before the meeting of the Executive Board, Azoulay promised Siamashvili to appoint Serbian Uros Mijuskovic to the strategic position of Secretary of the UNESCO Appeals Board.

Citing a source in the Human Resources Management (HRM), Inner City Press says that Mijuskovic’s appointment is one of the most controversial issues in many years. Uros Mijuskovic, the frontrunner for Secretary of the Appeals Board, has a triple nationality, contrary to the laws of the Kingdom of the Netherlands, of which he is also a citizen.

Moreover, according to Dutch sources, professional lawyers Rastovac Siamashvili and Mijuskovic, whose “off-duty relationship” is highlighted by Inner City Press, have been together since their work in The Hague in the office of the legal adviser of the Organization for Prohibition of Chemical Weapons. As a result, Siamashvili insists only on Mijuskovic’s candidacy and “does not notice” other Serbian candidates for positions in UNESCO, supported by official Belgrade.

In short, the intrigue boils down to yet another candidate being pushed for a cushy job through “love” patronage, which, along with family ties, is the guiding principle of career advancement in the corrupt organization.

It seems appropriate to also mention here Chilean Ernesto Ottone, UNESCO Assistant Director-General for Culture, and his Spanish mistress Sara Garcia De Ugarte, as well as Nicolas Kassianides, the head of the office of UNESCO Director-General, and his official mistress, Lily Neyestani. Evidence of anarchy and protectionism at the helm of UNESCO, provided by the Office of Human Resources Management, includes the fact that a non-staff member was invited to sit on a… UNESCO recruitment panel.

According to the source, the decision was made by Assistant Director-General Nicholas Jeffreys in an attempt to weaken the position of the President of the UNESCO Appeals Board and then to easily manipulate him when decisions regarding staff contestation cases would have to be made by him.

“By this deed, Tamara is imperiling the position and function of the Chair of the Executive Board and, as a result, is demeaning the Board itself,” said a diplomat.

While all these facts explain Tamara Rastovac Siamashvili’s completely blind obedience to Azoulay and her tacit support for the DG’s administration’s decisions, the secret is now exposed and interested member states may have serious questions regarding said facts.

This could destroy the comfort zone of those who keep to the shadows for their personal interests instead of defending to their best the electoral mandates given to the Chair of the Executive Board and to the Director-General of UNESCO.

Even for ambassadors who usually turn a blind eye to the political circus and diplomatic malfeasance, the actions of Azoulay’s administration go beyond the pale. This open influence peddling between Siamashvili and Azoulay takes the existing corrupt practices to another level. It escapes any form of control and goes against established rules and governance practices.

“This is where UNESCO stands today, a UN agency propitious to the flourishing of corruption, embezzlement, abuse of power and nepotism,” concludes Inner City Press. “This is also an example of António Guterres’ overwhelmingly corrupt UN system.”