Tehran is aware that the Nakhchivan corridor agreed under the 2020 Russia-brokered ceasefire would connect mainland Azerbaijan not only with its exclave but also with its ally, Turkey, Iran’s regional rival. 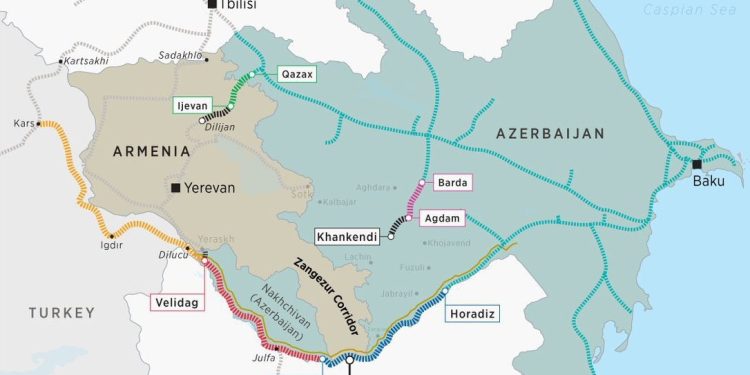 As part of the 2020 Russian-brokered ceasefire, Armenia agreed to the construction of a transport link between western Azerbaijan and its Nakhchivan exclave, which is surrounded by Armenian and Iranian territory, and shares a small border with Turkey. [Twitter]

Last month, as protests spread across Iran, the military’s Islamic Revolutionary Guard Corps (IRGC) was focused on another, less obvious threat to the regime: a potential peace deal between Azerbaijan and Armenia.

As part of large-scale military exercises, the IRGC practised, reportedly for the first time, using temporary bridges to cross the Aras River, which separates Iran from Azerbaijan and Armenia. The show of military force, officially routine drills, was a symbolic message to Baku that Tehran won’t accept changes in this border region.

But why is Iran so concerned that a potential peace agreement between the two archenemies might lead to such an outcome? And how could tweaks on a map challenge Iranian power?

As part of the 2020 Russian-brokered ceasefire that effectively ended the 44-day war between the two countries, which was fought over the Nagorno-Karabakh region, Armenia agreed to the construction of a transport link between western Azerbaijan and its Nakhchivan exclave, which is surrounded by Armenian and Iranian territory and shares a small border with Turkey. The deal was meant to ensure unimpeded citizens, vehicles, and goods movement between the Azerbaijani areas.

Control over transport links for this corridor would be guaranteed by the Federal Security Service (FSB) of Russia, which is one reason why the transit link remains a point of contention. Armenia fears that the Nakhchivan corridor could impact its sovereignty and, in turn, affect its border with Iran.

Azerbaijan, as the clear winner of the 44-day war, is pushing for the implementation of the Moscow deal and wants Armenia to build road and rail links along its border with Iran, with no passport or customs controls.

Tehran, for its part, is aware that the Nakhchivan corridor would connect mainland Azerbaijan not only with its exclave but also with its ally, Turkey, Iran’s regional rival.

Indeed, if the Nakhchivan corridor is built, it will give Turkey a new land route to the South Caucasus, which the Turkish leadership would likely use to strengthen its presence in the energy-rich region. Turkey would even gain a faster route to Central Asian markets, a sizable geopolitical victory for Ankara, giving it a transportation springboard to implement some of its ambitious pan-Turkic goals.

All of these developments could weaken Iran’s position in the region. The link would end Azerbaijan’s dependence on Iran for transit and eliminate the Islamic Republic’s monopoly on transit services in the South Caucasus. The transport corridor would also hand control over the distribution of water resources in the Aras River basin to Baku.

Security is the final reason why Iranian authorities fear the Nakhchivan link: If built as proposed, it could be used by Iran’s foes for military purposes.

Azerbaijan, despite being majority Shia, has strong military ties with Israel, Iran’s archenemy. It’s an open secret that the Israeli military would look to use Azerbaijan’s territory in the event of a major war with Iran. The last thing Tehran wants is to see an Azerbaijan-Armenia peace deal pave the way for Israel’s expanded presence.

Taken together, the Islamic Republic seems intent on preventing the construction of the transit corridor through Armenian territory.

Following Tehran’s military exercises in the Aras, Foreign Minister Hossein Amir-Abdollahian opened the Islamic Republic’s consulate general in Kapan, in southern Armenia’s Syunik province, a strategically important area through which the Nakhchivan corridor would pass. It was another signal to Azerbaijan that Iran sees itself as an unavoidable actor in the South Caucasus. Iran is also considering selling weapons, particularly Shahed-136 drones, to Armenia.

Tehran isn’t coy with its intentions. In a video aired on state television a few days after its military exercises, the Azeri-language broadcaster, Sahar TV, warned Azerbaijan that “anyone who looks at Iran the wrong way must be destroyed.” While Iranian officials later sought to downplay the rhetoric, emphasising “friendly and brotherly relations” between the two countries, it is hard not to view recent events as an escalation.

Azerbaijan has been equally combative; recent articles published in media close to the government supported the secession of Iranian provinces where ethnic Azerbaijani comprise most of the population. Given this development, it’s conceivable that the IRGC’s military exercises near the Azerbaijani border – which were held amid protests in Azeri-dominated parts of Iran – were actually meant for a domestic audience.

One thing is sure: Current relations between Azerbaijan and Iran are neither friendly nor brotherly. While Azerbaijan is a secular country, the Shia faith seems to be the only thing that the two countries share. Baku and Tehran have other allies, priorities, and geopolitical goals.

Thus, if Azerbaijan eventually succeeds in building its section of the Russia-supported Nakhchivan corridor, Iran will be the second biggest loser of the 2020 war.

Nikola Mikovic is a political analyst in Serbia. His work focuses mostly on the foreign policies of Russia, Belarus, and Ukraine, with special attention on energy and “pipeline politics.”