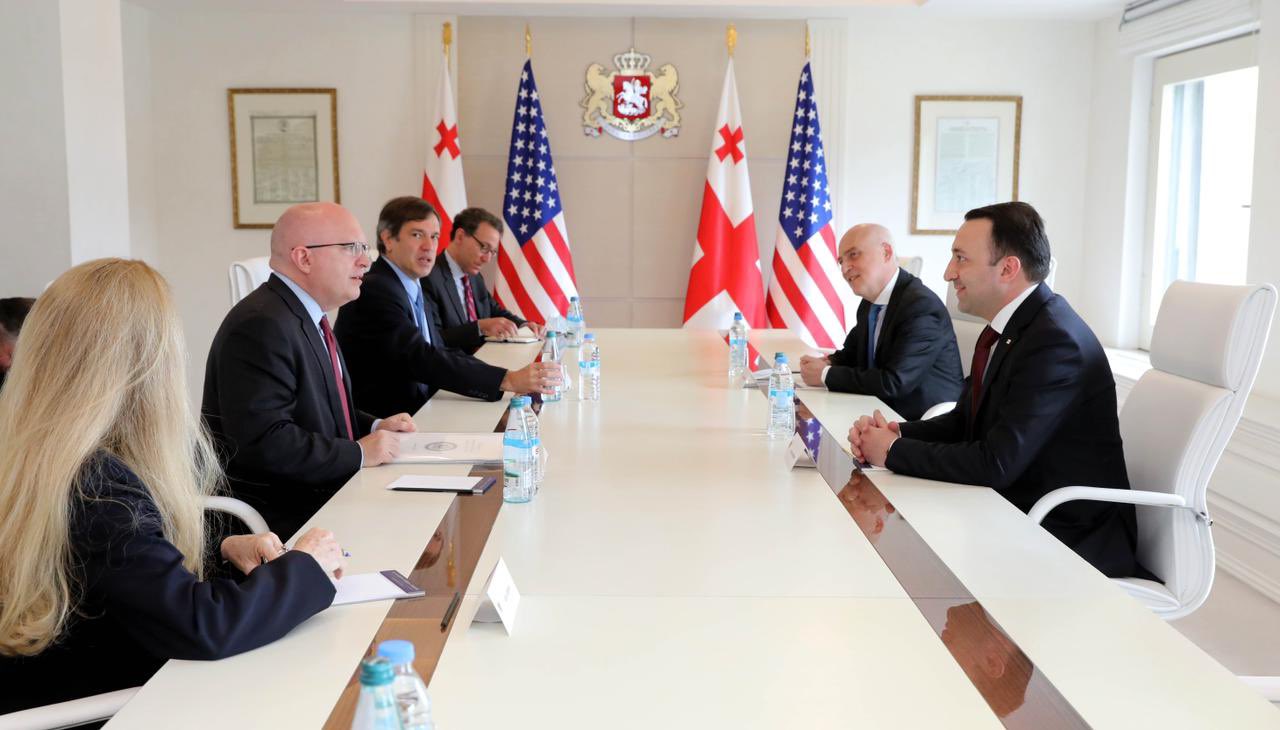 The freeing of Armenian prisoners took place on the territory of Georgia, not far from the point where the borders of all three South Caucasus states converge (Civil.ge, June 13).

On the same day, Georgian Prime Minister Irakli Garibashvili issued a special statement that he was “proud” of the role Georgia and he personally played in reaching an important compromise between Baku and Yerevan. Garibashvili stressed that Georgia achieved success in mediating between the two neighboring countries “in close coordination with our strategic partner the United States [and] Acting Assistant Secretary Philip Reeker to facilitate Azerbaijan’s release of 15 Armenian citizens detained during the conflict.” Also, according to the head of the Georgian government, the Armenian side’s conferral to Azerbaijan of information on the mined territories “is an important step” (Interpressnews, June 13).

The president of Georgia, Salome Zurabishvili, commended the prime minister on this success. “Irakli Garibashvili, congratulations for the humanitarian agreement reached between Armenia and Azerbaijan. Georgia is back to its historic mediator role, [the] US and EU [European Union] are back in the Caucasus, building confidence is the path to lasting peace,” Zurabishvili wrote on Twitter (Interpressnews June 13).

Georgia’s special role during the negotiations over “prisoners in exchange for maps of minefields” was confirmed by representatives of both Azerbaijan and Armenia. “Armenian prisoners of war handed over by Azerbaijan to Armenia are already on the territory of Armenia,” the country’s Acting Prime Minister Nikol Pashinyan stated at a meeting with his supporters in Gavar. “Through the efforts of the Prime Minister of Georgia Irakli Garibashvili, our Georgian brothers, Acting Assistant Secretary of State Philip Reeker and partners from the European Union, our brothers have returned. They crossed into Georgia from Azerbaijan with the help of the Red Cross, and from there they entered Armenia through the Bagratasheni checkpoint,” Pashinyan said (Interpressnews, June 13).

The success of the Georgian mediation efforts was likewise mentioned in an official statement by the Ministry of Foreign Affairs of Azerbaijan: “We appreciate the support of the Georgian government headed by the Prime Minister of Georgia Irakli Garibashvili for the implementation of this humanitarian action. […] Obtaining mine maps will save the lives and health of tens of thousands of our citizens” (Mfa.gov.az, June 12).

Secretary of State Antony Blinken tweeted, “The U.S. welcomes the release by Azerbaijan of 15 Armenian detainees. We’re grateful to the Government of Georgia for its vital role facilitating discussions between the sides. Such steps will bring the people of the region closer to the peaceful future they deserve” (Twitter.com/SecBlinken, June 12).

Some Georgian experts are convinced that Tbilisi’s success in the mediation process is a triumph and the most important event for Georgia in recent years. An analyst with the independent media outlet Nation.ge, David Avalishvili, recalled in a June 14 interview with this author that throughout its 30 years of independence, Georgia was never able to act as an equal actor in the long-term Armenian-Azerbaijani conflict. “The former Communist leader of Georgia, Jumber Patiashvili, tried to do this in 1988; and the first president of Georgia, Zviad Gamsakhurdia, [tried] in 1991; but these attempts then were totally unsuccessful. They even irritated the Armenian and Azerbaijani sides,” Avalishvili stipulated.

Professor Tornike Sharashenidze, who heads the International Relations Master’s Program at the Georgian Institute of Public Affairs (GIPA), is certain that the consent of the leadership of Armenia and Azerbaijan to the mediation by Georgia with the direct participation of the United States “reflects the fear of Baku and Yerevan about the increased influence of Moscow in the South Caucasus” in the wake of the Second Karabakh War (September 27–November 9, 2020). “Armenians and Azerbaijanis want to ‘balance’ the influence of Russia and Turkey with the help of the United States and Georgia. This is especially noticeable when analyzing the latest decisions of Armenian Prime Minister Pashinyan, who demonstrates more independence from Moscow,” Sharashenidze argued (Author’s interview, June 14).

But the most important (from Tbilisi’s point of view) symptom of the new tendencies in the South Caucasus, is the US’s clear desire to give Georgia more “weight” in helping to resolve regional problems. During a recent visit to Tbilisi, Acting Assistant Secretary Reeker named Georgia “a key partner of the United States and the administration of US President [Joseph] Biden in the South Caucasus, as well as in the entire Black Sea region.” Moreover, Reeker expressed support for Georgia’s territorial integrity, condemned the “Russian aggression of 2008 with the occupation of Abkhazia and South Ossetia,” and also thanked Georgian service members “for the courage shown in Afghanistan” (Civil.ge, June 12). The US Assistant Secretary of State additionally promised that the United States “will support Georgia’s accession to NATO [the North Atlantic Treaty Organization]” and, in the near future, “will provide Georgia with a large batch of the [COVID-19] coronavirus vaccine” (Interpressnews, June 7).

From Tbilisi, Reeker flew to Baku and Yerevan, held talks with the leaders of Armenia and Azerbaijan, returned to the Georgian capital and asked Prime Minister Garibashvili to convene a special meeting of the Georgian Security Council, which discussed the release of Armenian prisoners and the transfer of a minefield map to Azerbaijan (YouTube, June 11).

The participation of a US diplomat in a meeting of the Georgian Security Council was unprecedented in the entire history of the country. Paata Zakareishvili, who served as minister of state for reconciliation and civil equality in 2012–2016, said in a June 14 interview with this author that the United States “clearly wants to turn Georgia into a peacekeeping platform to actively influence regional processes.” Zakareishvili pointed out, “Georgia is the only country in the region pursuing an openly pro-American and pro-Western policy, which is different from Armenia and Azerbaijan. And given the fact that Washington was unable to play a significant role during the autumn war over Karabakh [see EDM, November 25, December 1, 3, 7], the State Department is now trying to use the ‘Georgian platform’ to maintain US influence in the South Caucasus, dominated by Turkey and Russia.”

The near future will show whether Georgia can fulfill this difficult mission in the new period of US-Russia relations following President Biden’s June 16 meeting with President Vladimir Putin in Geneva, Switzerland.