Deportation of Azerbaijanis from the Armenian SSR in 1988. Part II. The Sumgayit provocation

Starting from late 1987, the Azerbaijani population of Armenia was subjected to severe moral and psychological pressure, threats, and there were instances of physical violence used against persons of Azerbaijani nationality. 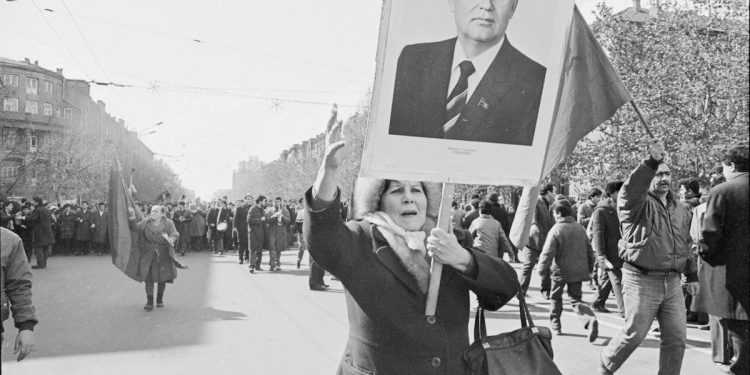 As an inevitable consequence, the first hundreds of Azerbaijani refugees from the Kafan and Meghri regions of Armenia appeared in the border regions of Azerbaijan as early as in January 1988. The scale of forced displacement grew significantly in February.

By February 18, 1988, i.e., by the time the first (still unofficial) reports of the territorial claims and anti-Azerbaijani actions in Armenia spread in Azerbaijan, the number of Azerbaijanis forced to leave the neighboring republic as a result of the escalating atmosphere of fear and violence had already exceeded four thousand people.

This is how the former secretary of the Baku City Party Committee Fuad Musayev recalls these events in one of his interviews. “I was on vacation… When the rallies began in NKAO on February 12, we were all at a loss, seeing it as something unusual, incomprehensible, because until that moment, there had been practically no strikes or protests in the USSR. On February 19, the Central Committee of the Communist Party of Azerbaijan received the order to urgently recall all responsible party and state leaders from leaves and vacations. I immediately returned to Baku. I went straight to the City Party Committee, without even stopping by my house first. The staff of the committee told me that several buses with refugees from Kafan region of Armenia had arrived in Baku a few days previously. The people were in a terrible state, beaten and maimed.

Refugees came campuses and began telling students about what had happened to them in Armenia. I was sure that this reeked of provocation. Why did they go to university campuses instead of asking for help from the city or republican authorities? They were sent to Baku for the sole purpose of aggravating the situation. In order to avoid provocations, I decided to close the city for entry. Already in the morning of February 21, I ordered to evict the Kafan refugees outside Baku to stay in the village of Mehtiabad. Of course, the refugees from Kafan were a little outraged, but they were still put on buses and sent to the territory of the Absheron region.”

Refugees arriving from the neighboring republic spoke about the atrocities going on over them, the heavy, oppressive atmosphere that forced them to leave their homeland, the graves of their ancestors, and their hard-earned possessions.

Collective farmer Gumbat Abbasov described the experience as follows: “Three houses were set on fire in our village of Artashat, Masis region. Since February 19, we have not been allowed to enter the markets, and the produce grown by our labor is wasted. You will not find a single Azerbaijani last name in the records of hospitals, clinics, and first-aid stations in Armenia. We were denied medical care. They don’t sell us bread and food. We are not allowed in public transportation. Mass groundless dismissals of Azerbaijanis have begun. They literally spat in our faces and shouted: “Turks, get out, get out of the Armenian land.”

The emotional atmosphere in Baku began to heat up even more when report began to arrive from Khankendi (at that time Stepanakert) about the appeal of the deputies of the regional council with a petition to be annexed to Armenia.

In contrast to the clear judgments contained in the Politburo resolution, a considerable element of ambiguity in the Kremlin’s position was introduced by Gorbachev’s address to the Azerbaijani and Armenian peoples in the same days. In Gorbachev’s address, these judgments were softened by admonitions to be tolerant and patient, to wait for the entire complex of national problems in the USSR to be reviewed soon.

This dead-end strategy of maintaining a certain balance of guilt of both republics, pursued by the center, only added fuel to the fire. Meanwhile, an emotional and political crisis was brewing in Azerbaijan. The events in Nagorno-Karabakh, the open anti-Azerbaijani propaganda had created an extremely tense situation in the Armenian-Azerbaijani relations along the entire perimeter of direct interaction between the Armenian and Azerbaijani populations both in Armenia and Azerbaijan, especially in Nagorno-Karabakh.

Demands for the separation of the autonomous region from Azerbaijan, loudly voiced at rallies and demonstrations in Khankendi and Yerevan, created an atmosphere of incandescent emotions, generated enmity and hostility between the two communities of Nagorno-Karabakh.

The first instance of mass confrontation between Azerbaijanis and Armenians threatening to escalate into a bloody massacre took place on the Khankendi-Agdam road on February 22-24, 1988. Agdam region, bordering the NKAO, was seething, as the population was agitated by the refugees’ stories about the events in Khankendi, their complaints about Armenian atrocities and insults aimed at Azerbaijanis.

The culmination was the news of the murder of two Azerbaijanis—the first victims of the Karabakh conflict—in Askeran region. The indignation of the people was curbed eventually by the efforts of the regional activists, together with representatives of the authorities in Baku. It was decided not to stir up passions at the rally in Agdam, so that the death of two Azerbaijanis would not lead to more bloodshed. However, the unfolding events followed a different scenario.

Rumors about the Armenian atrocities soon unexpectedly received official confirmation, circulated by the central television. The growing influx of refugees from Armenia, coupled with the outrage of the Azerbaijani public, turned the Armenian population of the republic into hostages of the Karabakh conflict. This is what the Armenian nationalists sitting in Yerevan and Khankendi had counted on, wishing for Armenian blood to be shed in order to stage their propaganda show around it.

Murders of Armenians would give these people a reason to prove that the rights of the Armenian population were being violated in Azerbaijan and the two peoples were incompatible and could not continue to live together.

One of the Armenians’ favorite tactic was to seek clashes with the authorities, calling it “oppression” in their propaganda. This tactic was also followed by those who organized the Sumgayit provocation, one of the leaders of which was an Armenian ex-convict E. Grigorian. Of course, the refugees, mainly from Kafan region of Armenia, who were in the city at that time, also added fuel to the fire with their stories about the pogroms perpetrated by the Armenians in the regions where mainly Azerbaijanis lived. This might have been the very spark that caused the outbreak of mass riots and violence in Sumgayit on February 28-29.

Both Armenians and Azerbaijanis fell victim to the Sumgayit provocation. Although the Sumgayit events were condemned by the local population, the public, the official authorities of Azerbaijan, and 96 people were brought to criminal responsibility, it did not calm the Armenian extremists. They considered that political and legal assessment had not been given to the Sumgayit events. The Armenian side needed this to substantiate yet another myth of “genocide”, to put this label on Azerbaijan.

In his book, F.Bobkov cites the confession of a Sumgayit Armenian woman who openly says, “You think those intellectuals there, in Yerevan, think about us, Armenians. They think about the land. And that’s the only reason they want Karabakh.”

A similar confession was voiced by the Deputy Chairman of the Council of Ministers of Armenia Kirakosyan during his meeting with Bobkov. In the course of a long explanation why the Karabakh problem should be resolved in favor of the Armenians, he cited the following as an important argument: “We really need land”.

The “blood divide” in Sumgayit crossed out the moral reputation of perestroika with a crimson scar. Several Western newspapers published a picture of Gorbachev with a bloody birthmark on his forehead. Like a boxer who was knocked down but remained standing, Gorbachev tried to pretend that nothing irreparable had happened, urged to keep a cool head, warned against reprisals, offered to send an address to both peoples.

He saw the Sumgayit events as a conspiracy of anti-perestroika forces and the local mafia directed against him personally, a “test for Gorbachev”. If that was truly the case, then his policy of national appeasement clearly failed this test.