Back in 2020, when Russian peacekeeping forces arrived in the territory of Azerbaijan, many hoped that they would deal with the implementation of the paragraphs of the trilateral statement, but after a while it became clear that this was a vain hope, that the "peacekeepers" on our soil are doing something completely different, and we should not expect any constructive actions from them. 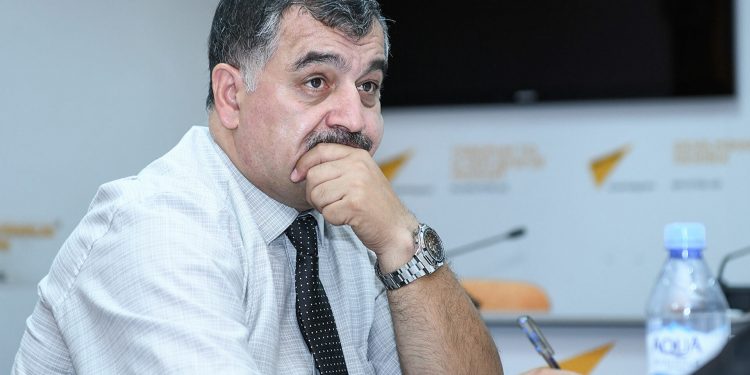 Their deployment in the Azerbaijani territory for a year and a half proved once again that the command of the peacekeepers, from Lieutenant General Rustam Muradov to Major General Andrey Volkov, is engaged in pandering to the separatists and in general openly expresses its lack of respect for the territorial integrity of Azerbaijan. Azerbaijani military expert Uzeyir Jafarov talks about this in his conversation with Minval.az.

One should take into account that representatives of the peacekeeping contingent do not act on their own, but follow the orders from Moscow and Rostov, the home to the command of the Southern Federal District to which they are subordinated.

“The fact that the website of Russian Defense Ministry continues to write ‘Nagorno Karabakh’ and mentions Armenian names of Azerbaijani settlements shows that Russia panders to separatists like Araik Harutyunyan, Davit Babayan, Vitaly Balasanyan and others,” said the military expert.

And the fact that our positions are fired upon directly from the base of Russian peacekeeping forces in Khojaly shows that at least that was done with the knowledge of the command of that contingent, the expert believes.

“It is that very same General Volkov ‘offended’ by the Defense Ministry of Azerbaijan, who was rightly shown his place for the arrogance he demonstrated towards the Azerbaijani military. Actually, General Volkov gets his ‘inspiration’ from the Russian Foreign Ministry, represented by Maria Zakharova and Sergey Lavrov. By the way, Zakharova said at a briefing that only the command of the peacekeeping contingent decides who is to be let into the Azerbaijani territory and who is not, although we have repeatedly stated that no one has the right to make such decisions without the permission of official Baku,” the expert stressed.

According to him, the biggest display of disrespect on the part of the Russian peacekeepers was when Armenian terrorist Norayr Mirzoyan committed a crime against Azerbaijani soldiers near the village of Dashalty, was arrested by the Russian peacekeepers and then handed over to the Armenian side without any explanations, becoming a “hero”, almost “the second Nzhdeh” in the eyes of the Karabakh separatists.

“The utter military failure of Russian troops in Ukraine is indicative of the conceit and arrogance of misguided generals like Volkov, Muradov, Kosobokov, Anashkin and others,” the military expert said.

Of course, Jafarov points out, Azerbaijan could not brush this off and it repeatedly warned the parties, including the separatist leaders, that “the strictest measures will be taken and these measures are already being taken.”

“As a result, when the Armenian separatists opened fire again recently, the Ministry of Defense of Azerbaijan gave a tough response, and they got what they so thoughtlessly sought,” Jafarov stressed.

“Within the next month, Azerbaijan will pose the question point-blank: either the peacekeepers ensure the fulfillment of Paragraph 4 and other paragraphs of the trilateral agreement, or Baku reserves the right, both legal and moral, to conduct the necessary operation in the area of responsibility of Russian peacekeepers in order to make all Armenian armed groups withdraw to Armenian territory or surrender,” he added.

It does not matter whether the peacekeepers are in Karabakh or not when that happens. One way or another, they will get a warning from the Azerbaijani Defense Ministry soon enough, Jafarov says. At the same time, he emphasized that we should not expect the entire group of the Russian peacekeepers to be redeployed to Ukraine, despite what the known statement says. In reality, the peacekeeping contingent from Karabakh was only temporarily relocated to the 102nd Russian military base in Gyumri to replace the units sent from that base to fight in Ukraine.

In his opinion, Russia has not given up on its imperial ambitions regarding the South Caucasus, and the frequent communication of the Russian head of state and the Russian Foreign Ministry with the Armenian leadership also speak for that.

“Azerbaijan should not lose time and push for a peace treaty to be signed, because its implementation is absolutely not to Moscow’s advantage, as its signing will put an end to the Russian mission in Karabakh,” Jafarov stressed.

However, according to Jafarov, an unpleasant surprise awaits Russia in the near future: by refusing to comply with the decision of the International Criminal Court in The Hague to end hostilities in Ukraine, Moscow may find itself outside the legal international field and become a complete outcast of the civilized world.

“It remains to be seen what international resolutions against Russia will be adopted in response. Should the Russian armed forces be officially, at the international level, recognized as a terrorist force as a result of these resolutions tomorrow, Azerbaijan will also demand that the Russian peacekeepers leave the territory of our country, because our country cannot cooperate with military formations having this status,” the expert summed up.