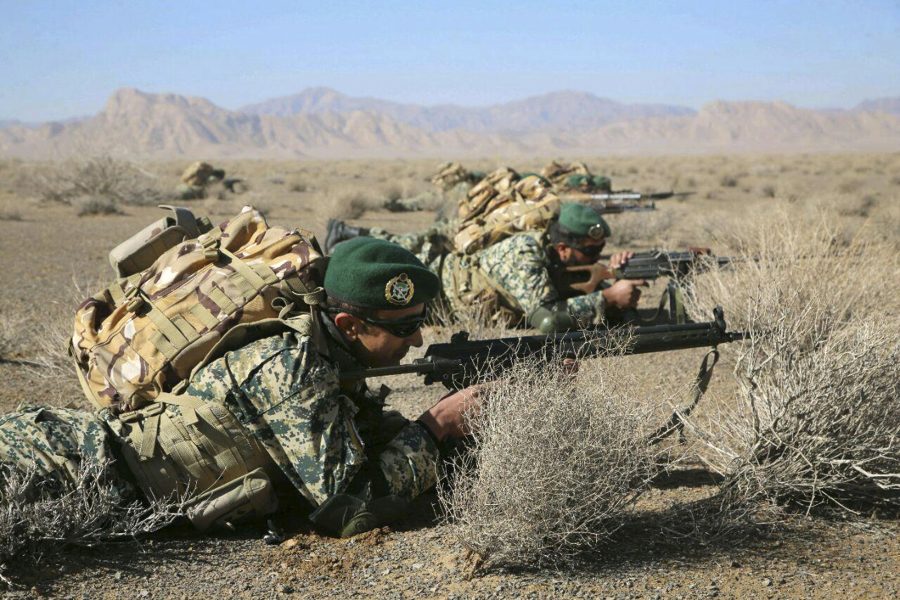 They began when Tehran started conducting large-scale military drills codenamed ‘Fatehan-e Khaybar’ (Conquerors of Khaybar) near the Azerbaijani districts of Fizuli, Jebrayil, and Zangilan, the latter of which was captured from Armenian forces during the Nagorno-Karabakh conflict in 2020.

In turn, the location of Iranian military exercises pushed Azerbaijan to launch another joint drill with Turkey in the strategically important Nakhchivan enclave, a landlocked autonomous republic of Azerbaijan, citing security concerns.

“Iran’s concerns are not limited to the so-called presence of Israel, but also the growing footprint of Turkey in Azerbaijan in the post-Nagorno-Karabkah war period”

In late September, Azerbaijan’s President Ilham Aliyev criticised Tehran’s military exercises, telling Turkey’s Anadolu Agency that “every country can carry out any military drill on its territory. It’s their sovereign right. But why now, and why on our border?”

In response to Aliyev’s comments, the Iranian Foreign Minister Hossein Amirabdollahian said, “we do not tolerate the presence and activity against our national security of the Zionist regime, or Israel, next to our borders. And we will carry out any necessary action in this regard”.

Brigadier General Kioumars Heidari, an Iranian ground forces commander, told state TV that “we respect good neighbourly relations but we do not tolerate the presence of Zionist regime elements and Islamic State terrorists in the region”.

Iran’s concerns, however, are not limited to the so-called presence of Israel, but also the growing footprint of Turkey in Azerbaijan in the post-Nagorno-Karabakh war period. Indeed, the military partnership between Israel and Azerbaijan has been a game-changer since the country gained independence from the Soviet Union in 1991.

While Azerbaijan enjoyed victory in the frozen Nagorno-Karabakh conflict last year, Israel is another, and more remote, beneficiary of the conflict. Baku’s victory in the war with Armenian forces boosted defence cooperation between Baku and Tel Aviv.

One example of this was the announcement in March 2021 of a new joint venture between Israeli defence company Meteor Aerospace and Azerbaijan’s Caspian Ship Building Company.

Moreover, reports in Israeli media in August claimed that Baku and Tel Aviv are in negotiations to strike a new $2 billion defence deal that entails the additional acquisition of Israeli-made weaponry.

Despite being a Shia-majority country, Azerbaijan, with its secular state model, has turned to Turkey and Israel as its top allies while distancing itself from Iran’s revolutionary Islamist agenda.

Despite Iran’s claims, authorities have not provided any tangible evidence of any presence of Israel’s military or intelligence services along the shared border. This has not stopped other senior officials, such as Iran’s Border Guard commander Brigadier-General Ahmed Ali Goudarzi, from claiming the existence of “Israeli military bases” in Azerbaijan.

While Israel’s defence cooperation with Azerbaijan is certainly motivated by countering Tehran, Turkey’s growing soft power, both economically and militarily, in the region is also a new source of concern for Iran.

“In addition to Turkey and Israel’s soft power, Tehran is also worried about losing its direct link with Armenia via the Lachin corridor”

The main advantage of the recent war in Nagorno-Karabakh for Ankara and Baku was creating the Nakhchivan corridor linking Azerbaijan with Turkey, a project that Iran monitors very cautiously. From the point of view of Iran, gaining a direct land route with Azerbaijan will bolster Turkey’s role in a critically important area – northwestern Iran, where there is a sizeable ethnic Azeri community.

Iran fears that Turkey’s access to the border area and economic activities may trigger separatist sentiments in northern Iran, although Baku has never been officially engaged with active members or groups of Iranian Azeris.

Moreover, the Azerbaijani-Turkish-Pakistani special forces drills and renewed Azerbaijani and Turkish Special Forces drills in Nakhchivan were another trigger for Iran in light of Tehran’s uneasy relations with both Ankara and Islamabad.

In addition to Turkey and Israel’s soft power, Tehran is also worried about losing its direct link with Armenia via the Lachin corridor, which physically connects the Armenian-populated parts of Nagorno-Karabakh to the Republic of Armenia.

For nearly three decades, Iran has been engaged in trade with Armenia through this corridor until Azerbaijan set up a checkpoint along the Goris-Kafan road and imposed custom tariffs for Iranian trucks.

Through this move, Azerbaijan made it clear that it would no longer tolerate trade operations in Nagorno-Karabakh, which has added more fuel to the ongoing tensions. In retaliation, Iranian authorities indicated they would fully restore transport links with neighbouring Armenia, which had been disrupted.

Seemingly, at this stage, any kind of assurances from Azerbaijan would be insufficient to dampen Iran’s concerns regarding the growing “threats to its national security.” In a worst-case scenario, any military action by Iran against Azerbaijan would provoke a reaction from Turkey and even Russia, which still views the South Caucasus region as its sphere of influence.