What is going on at the Armenia fund?

A charity dedicated to promoting economic development has a long history of corruption, criminality, and even abetting military affairs. Now, people are asking questions. 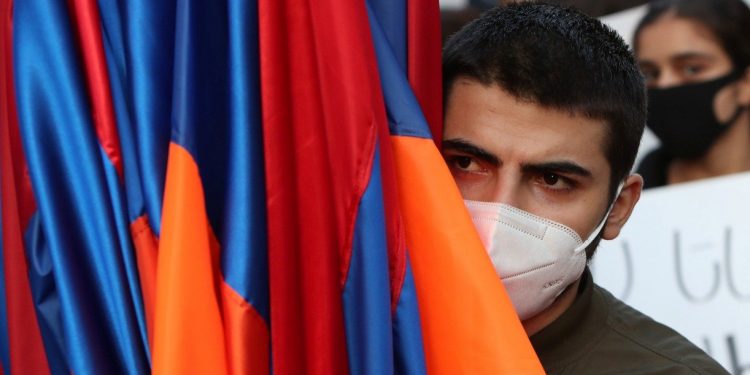 The black clouds continue to hang over the Hayastan All Armenian Fund—also known as “Himnadram” to Armenians. The organization, established back in 1992, aims to connect the international Armenian diaspora with their mother country, all for the sake of raising money to support the economic development of Armenia proper. Overall, in the course of its existence, approximately a million Armenian citizens have benefited in some way from a total of around $400 million raised.

Himnadram, as promised, came to Armenia’s help when the country was embroiled in a conflict with its neighbor, Azerbaijan, in the fall of 2020. The fund had one of its most successful years in its history, raising a bit under $200 million through global telethons. Around 750,000 individuals from the United States, Europe, Australia, and other parts of the world contributed to the fund to assist Armenians in the war effort against Azerbaijan. Even though the fund’s charter clearly states that the Armenian government cannot be a direct recipient of funds, about 60 percent of the raise amount was transferred straight to the state budget due to “urgency.”

When the war ended, however, the emotional high gave way to rationality, and donors sought to know how and in what form the $200 million was spent. In the postwar Armenian political milieu, this issue has gone beyond simple curiosity and become a matter of what can only be described as political blackmail. The current Armenian government stands accused of squandering finances and embezzlement by its political opponents, notably former president and Himnadram board member Robert Kocharyan.

To put an end to the dispute, former Armenian president Armen Sarkissian requested an independent audit from Himnadram and offered to repay all donations if the audit revealed a violation. Haykak Arshamyan, the fund’s executive director, agreed to this resolution. However, the contents of the resulting audit have yet to be made public. Furthermore, Arshamyan believes that claims have been artificially politicized, even claiming that attacks against Himnadram were carried out by some circles using an “online troll army.”

A Troubled History of Misuse

Despite Himnadram’s own claims that it has nothing to do with politics, the known facts tell an entirely different story. Himnadram has been involved in politics since its conception. When the fund was founded in 1992, it was headed by Manushak Petrosyan, a longtime friend and ally of then-President Levon Ter-Petrosyan. It wasn’t just Petrosyan’s personal ties to the president or her concurrent resignation with him that made her famous: the wealth she somehow accrued over the six years she was in charge—including an assortment of luxurious houses, stores, and restaurants she managed to acquire—all made the news. To top it all off, Petrosyan’s relationship with the fund did not end with her resignation. After leaving Himnadram, she founded a  construction company named “Spectrum,” which was subsequently—out of all possible companies—handed a contract by the fund to build the Gyumri Children’s Art Center.

When Raffi Hovannisian—a diaspora Armenian who led the nationalist Dashnak Party’s youth federation in California—was appointed as the fund’s new executive director, he was tasked with mending relations between diaspora Dashnaks and the Armenian government, which had deteriorated under Ter-Petrosyan’s tenure. In a 1999 interview with Azg Daily, Hovannissian acknowledged Himnadram’s politicization, explicitly stating that “Of course, there was a certain amount of politicization.” He even gave a concrete example of how such politicization hampered diaspora Armenians’ ability to complete projects. “A few years ago the Greek-Armenian community had raised 300,000 dollars for donating to Armenia. The donation was being constantly postponed due to political reasons.”

The concern over Himnadram goes beyond examples of the fund’s partisanship; it’s also a question of how its funds have been spent. For example, in 2007, Himnadram funded the construction of a windsurfing center in the Kaputak Sevan resort complex on the beaches of Lake Sevan. The resort is coincidentally owned by Bella Kocharyan, former President Robert Kocharyan’s wife. The fund also paid for the acquisition of the required equipment for the facility. What is now being questioned is the very fact that the construction budget of the center was officially explained by the fund quite differently. One can go as far as to even speculate how much Kocharyan’s personal windsurfing hobby influenced the construction of such a center.

Other instances of impropriety abound. After the fund’s annual telethon in 2013, it was revealed that luxury service cars were acquired for the Armenian-backed separatist regime in Karabakh, and the personal bank loans of people linked to the regime were paid. Separately, Ara Vardanyan, another executive director of Himnadram, was arrested in 2018 by Armenia’s National Security Service (NSS) on suspicions of embezzlement and misuse of money. Vardanyan admitted to using a Himnadram credit card with a limit of 20 million drams (about $41,500) for online gambling, according to NSS. He then replenished the credit card account with donated cash. Vardanyan then made a personal cash infusion to cover up the missing money, according to his own testimony.

Then there is the matter of potential money laundering. Armenia, one of the world’s largest tax evaders, with an annual black-market worth about $300 million, and Karabakh, a legal gray zone where international inspection has been impossible for decades, have long been safe havens for what is allegedly the Himnadram’s extensive and sophisticated money-laundering network. Remember that the Himnadram’s branches in sixteen countries are tax-exempt due to being part of a charity organization. For many years, some Armenian oligarchs have exploited this tax-exempt status extensively. Investigative journalists exposed one such case:

The investors intended to construct a hotel in Nagorno-Karabakh. Given the unrecognized republic’s poor economic situation, this was a dangerous venture. They realized the deal as follows: the investors donated a large sum of money to the “Hayastan” All-Armenian Fund in the United States and received it in Artsakh; they left a certain percentage to the Fund, which was significantly less than the amount of income tax they would have to pay to the United States.

The Karabakh region, which is internationally recognized Azerbaijani territory but was under the effective control of Armenian military forces until the war in 2020, has been at the center of Himnadram’s thirty years of activity—something which has been actively endorsed by celebrities like Kim Kardashian and Serj Tankian.

Himnadram has funded the construction of two highways connecting Armenia and Karabakh: one that runs through the depopulated Azerbaijani districts of Shusha and Lachin, and another that runs through Kalbajar. Several other roads in Karabakh were paved as well, including the North-South Road, which connects the southernmost banks of the Aras River with the Republic of Armenia—and was previously used primarily for drug and arms trafficking.

Though these roads are ostensibly beneficial to all, in that they make it easier for people and goods to travel in both directions, they were also designed to ensure the de facto unification of Armenia and Karabakh into a unified economic space. In others, these roads assist in Armenia’s de facto annexation of internationally recognized Azerbaijani territories.

Then there are the military-strategic implications of these projects. Following Armenia’s victory in the first Nagorno-Karabakh war in 1994, the Armenian armed forces, which had faced numerous logistical challenges during the war, began to construct roads in areas under their control that were primarily intended for military use. It was the Himnadram that funded most of those roads: the fund’s second, third, fifth, sixth, seventh, sixteenth, and seventeenth telethons were all dedicated to raising funds for road construction, and around $67 million was raised in this manner.

Himnadram’s actions in Karabakh, however, are not confined to road construction. As part of the “Re-population of the villages of Artsakh” project, it sponsored illegal resettlement in Karabakh. The fact that repopulation efforts have taken place, particularly in places where Azerbaijanis historically inhabited, indicates that the project was about more than merely providing homes for the homeless: the goal of preventing the return of Azerbaijanis to their homes, creating a new demographic situation on the ground and imposing a fait accompli.

Where Did the Money Go?

Given Himnadram’s decades-long efforts in Karabakh—which were de facto intended at bolstering Armenia’s military occupation and obstructing the implementation of internationally-backed peace proposals—it is only reasonable to ask how exactly the fund’s donations collected during the 2020 Karabakh War were spent. According to Armenian prime minister Nikol Pashinyan, Himnadram’s donations to the Armenian government covered roughly half of the government’s war expenses—again, a move of questionable legality that goes directly against the fund’s charter. In response to questioning from media, Finance Minister Vazgen Harutyunyan stated that his ministry oversaw routing cash via various government departments to provide medical help to military soldiers and crucial infrastructure maintenance throughout the war.

The Himnadram’s previous activities, as well as the remarks by Pashinyan and Harutyunyan, make it impossible to believe that “not a cent collected by Himnadram was spent for military purposes.” If “roughly half” of Armenia’s war expenses were covered by international donations, then some of that likely involved not only the purchase of military equipment, but also the maintenance of the Armenian artillery troops’ deployment bases that targeted Azerbaijani cities during the war, as well as the repair plants that repaired war-damaged military equipment.

If it is proven that charity money was used to fund military activities, then Himnadram’s tax-exempt status across multiple legal jurisdictions may come into question. Years of research have revealed how U.S.-based charities deceived individuals and even raised donations for terrorist organizations. It is thus far from outlandish to speculate that the Armenia Fund’s tax-exempt status has allowed different interest factions to receive money from people living in a variety of countries, primarily the United States, without being inspected, and ultimately utilized to support both narrow oligarchic interests and military purposes, including war crimes.

Thus, not only Armenians in diaspora, but also Azerbaijanis are eager to learn how Himnadram’s funds were utilized. The answers—if past activity is any indication— are likely to not just be awkward, but legally and morally damning.

Aleksandar Srbinovski is a journalist with over fifteen years of experience working in print and online media. He has worked for Nova Makedonija, Newsweek, Europa, Blic, Politika, ABC News, Vecher, TV Sitel, and Skok. He holds a BA in journalism from the Saints Cyril and Methodius University of Skopje and has pursued continued training with the University of Oklahoma.