Who has effective control in Azerbaijan’s Karabakh Region?

Following the so-called “44-Day War” between Armenia and Azerbaijan in late 2020, the conflicting parties continue several legal battles before the International Court of Justice (ICJ) and the European Court of Human Rights (ECtHR), alleging various violations of international law. 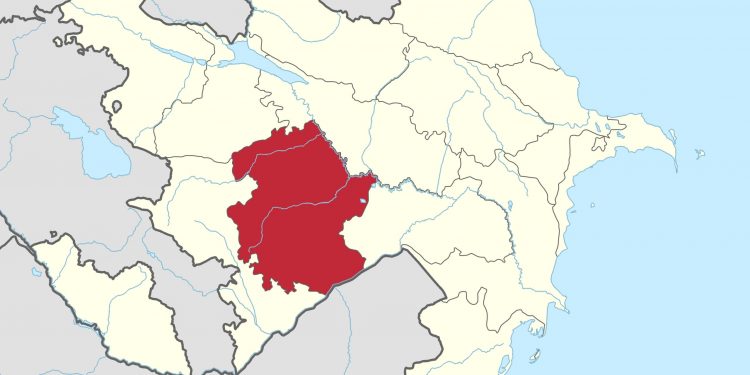 The war saw Azerbaijan liberate a significant part of its territories under Armenia’s three-decade-long occupation, except for parts of its Karabakh region now temporarily stationed by a Russian peacekeeping force under an armistice agreement. The new physical reality on the ground created a novel international legal situation regarding extra-territorial jurisdiction and state responsibility. An important legal issue is whether Armenia or Russia or both bear responsibility for international law violations (e.g., continuing military occupation, denial of former residents’ right to property, security, movement, etc.) in Karabakh by virtue of their effective control under the European Convention on Human Rights? Are the new facts on the ground sufficient to change the ECtHR’s landmark judgment in Chiragov and Others v. Armenia?

Effective Control in Karabakh before 2020

Since the 1991-1994 war, Armenia’s military occupation and effective control over Azerbaijan’s Upper Karabakh (Nagorno-Karabakh) region and adjacent seven districts (“Occupied Territories”) has been unequivocally established, among others, by the United Nations Security Council and the General Assembly, the Council of Europe, the European Parliament and other international organizations. On top of this, the ECtHR in the landmark case of Chiragov and Others v. Armenia concerning the displacement of six Azerbaijani-Kurdish families confirmed Armenia’s effective control and its overall state responsibility for human rights violations in the Occupied Territories.

In summary, from 1992 to 2021, Armenia, by exercising extra-territorial jurisdiction (effective control) over the whole Occupied Territories, has had overall state responsibility for human rights violations under the European Convention on Human Rights (European Convention).  These human rights pertain to almost a million Azerbaijanis displaced as a result of Armenia’s military occupation, including their right to property, security, movement, education, religion, etc., in the previously Armenia-occupied territories.

Effective Control in Karabakh after 2020

First, the “44-Day War” revealed the total inadequacy of the ECtHR’s traditional effective control test by revealing an extensive scale of Armenia’s armed forces in the Occupied Territories underappreciated by the ECtHR’s earlier decisions in the Chiragov, Zalyan and Muradyan cases. For instance, the reports by Washington Post, Wall Street Journal, Forbes, and Military-affairs blog Oryx revealed Armenia’s loss of a massive number of military hardware, e.g., hundreds of tanks, artillery systems, and air defense systems in the war.  In addition, Armenia’s acknowledged number of casualties, over 4,000 killed and 11,000 wounded soldiers and 25,000 surrounded soldiers in Karabakh indicate that Armenia had about 40-45 thousand soldiers (out of its total 52,000 active personnel as per IISS) in the Occupied Territories. In this author’s view, it can confidently be inferred from these emergent data that Armenia had from eighty to ninety percent (80-90%) of its overall armed forces in the Occupied Territories unaccounted for in the Court’s previous decisions. The noticeable gap between Armenia’s boots on the ground and the ECtHR’s inadequate legal assessment will require revisiting its traditional effective control test and evidentiary standards in the ongoing inter-State cases.

Notably, the “44-Day War” and the subsequent armistice agreement dated 10 November 2020 (“Armistice Agreement”) have brought three important legal consequences: first, Azerbaijan liberated a significant part of its Occupied Territories from Armenia’s effective control, except for parts of its Karabakh region; second, a Russia’s peacekeeping force was introduced to the designated areas in Karabakh; and third, a joint Russia-Turkish Monitoring Center was created in the Azerbaijani city of Agdam to supervise the ceasefire.  Since Azerbaijan does not exercise jurisdiction over parts of its Karabakh region yet, a legal assessment of which country has effective control will become paramount for the European Convention.

Russian “Peacekeeping” or “Keeping in Pieces”?

Under Article 3 of the Armistice Agreement, Russia’s peacekeeping force of 1,960 personnel with small arms was introduced into a well-delineated ‘zone of responsibility’ in Karabakh and the Lachin pathway, connecting ethnic Karabakh Armenians and Armenia.  In addition, it is allowed to have 90 armored personnel carriers and 380 vehicles and special equipment units.  It currently operates 27 checkpoints in the area, conducts daily patrols, reports ceasefire violations, and provides security escorts to convoys and some humanitarian aid to the local population.  Together with its auxiliary support, the overall number of Russian forces is estimated to be around 4,000.

There is a lot of uncertainty about the exact responsibilities of the Russian peacekeeping force.  Without a UN or regional mandate, the open-ended provisions in the Armistice Agreement leave its activities subject to misinterpretations and overstretch.  Initially intended as a security umbrella for the ethnic Armenian civilians in Karabakh in the interim period, the Russian peacekeeping force’s role has morphed into securing a ceasefire between the two armies in and around its “zone of responsibility” in Karabakh in the face of Armenia’s army incomplete withdrawal.

The ECtHR encountered a similar question regarding the role of Russia’s peacekeeping force in Moldova’s Transnistria and Georgia’s South Ossetia and Abkhazia regions.  The court, in its recent the Georgia v. Russia (II) case, applied several criteria, namely, the number of Russian military bases, soldiers, and hardware for total inhabitants, and its economic and financial support, dependence and subordination, border protection, dual citizenship of key local officials, etc. (§ 162-175) and concluded that a Russian force has effective control over these regions.

By way of applying these criteria to Azerbaijan’s case, while Russia has a sizable military force in Karabakh with total inhabitants of about fifty thousand, unlike in the Georgian case, it has not exceeded the threshold of military occupation.  Secondly, there are no significant economic, financial, and other forms of dependence of the region on Russia yet.  As of now, it remains unclear whether Russia’s sole military presence would compensate for the lack of other levers of control in Karabakh for the purposes of the European Convention.  This highly contextual question requires assessing Armenia’s continuing military and other roles in Karabakh as well.

While the UN Security Council resolutions and the Armistice Agreement envisage the “withdrawal of Armenian armed forces” (Article 4), this process seems incomplete or reorganized into a different shape in practice.  According to the International Crisis Group’s new report, about a 12,000-strong Armenian army still remain in Karabakh after Armenia has reportedly withdrawn its main forces and most of the heavy weaponry deployed against Azerbaijan during the war.  The International Crisis Group’s earlier reports found that “Armenian and de facto Armenian-Karabakh military forces are intertwined, with Armenia providing all logistical and financial support, as well as ammunition and other types of military equipment.”

Thus, in the post-war period, there is no indication that Armenia severed its military, financial, political, and logistical integration with the local regime and military formations in Karabakh in the post-war period; on the contrary, the multidimensional dependence (integration), as previously established in the Chiragov, Muradyan and Zalyan cases, has increased more than ever.  For instance, Armenia’s return of the previously occupied districts rich with agricultural, water, and energy resources under the Armistice Agreement, made the local administration in Karabakh even more dependent on Armenia.  Accordingly, Armenia’s annual support has dramatically increased, providing up to 300 million US Dollars to the local regime’s operations in Karabakh, an increase of 50 percent compared to the pre-2020 era.  It pays for salaries, pensions, utilities, infrastructure, local programs, and other undeclared activities (arguably, military operations).

In the post-war period, there are also numerous reports about Armenia’s regular and covert dispatch of the conscripts and contract soldiers to Karabakh through the Lachin passway now controlled by Russia – a friction point between Azerbaijan and Russia.  On top of this, since March 2022, the Russian peacekeepers started describing their contacts “with the Azerbaijani and Armenia’s General Staffs” as necessary to ensure the safety of Russian peacekeepers in Karabakh.  suggesting Armenia’s direction over local military units – the so-called “Artsakh Defense Army.”

Despite the presence of Russia’s peacekeeping force, the post-war cumulative facts indicate that Armenia’s decisive military and non-military presence in Karabakh has dramatically increased compared to the pre-war period, reinforcing the Chiragov judgment.

Militarily, Armenia, through its 12,000-strong army units in Karabakh, formally reorganized as the local “Artsakh Defense Army,” still exercises control over the region for the purposes of the European Convention.  Arguably, these units are a simple continuation of Armenia’s Armed Forces for all intent and purposes.  In this context, Russia’s limited military force in Karabakh cannot be assessed as exercising effective control over this territory.  However, their high-level decision-making coordination in retaining Armenia’s control cannot be excluded.

Second, the region’s economic, financial, logistical, and political subordination to Armenia considerably deepened in the post-war period.  Since 2020, Armenia has kept spending and investing more significant resources in Karabakh than ever before during the history of its military occupation, without which a local administration would not be able to survive and operate.

Overall, in this author’s view, despite the territorial reduction of Armenia’s control over the previously occupied territories of Azerbaijan, it continues to exercise effective control over parts of Karabakh for the purposes of the European Convention and international law. As a result, the UN Security Council Resolution # 822 still remains unimplemented by Armenia.