Why autonomy is not a viable solution in Karabakh

In recent discussions, some Armenian and Azerbaijani scholars have promoted the idea of autonomy for the Armenian minority in the Karabakh region. 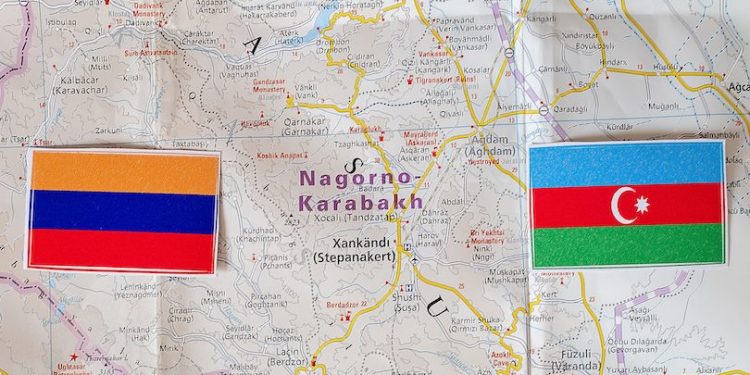 Nevertheless, their argument is flawed on the basis of: (a) international law, (b) the legacy of the violent conflict, and, most importantly, (c) the number of affected Armenians, who do not even constitute 0.1% of the Azerbaijani population by some measures. In a recent opinion essay on E-IR, and elsewhere , Vahagn Avedian aptly argued that autonomy “is not a solution for the future of Karabakh”, I fully agree with his conclusion but for different reasons.  Instead, Avedian advances the idea of separatism on the basis of “remedial” secessionism.

Avedian contends that the Armenian minority cannot live together with Azerbaijanis and thus they either need to be independent or be unified with Armenia. I would argue that for the security and well-being of Armenia and Azerbaijan, as well as the welfare of the Armenian minority, there should not be any form of territorial autonomy.  The Karabakh conflict should be considered the key reason why the population of the Republic of Armenian declined from 3.3 million in 1994 to 2.9 million in 2021, which coincides with a drop in the number of Armenians in Karabakh.

In examining a conflict which has lasted for more than thirty years, the massive ethnic cleansing of Azerbaijanis from their ancient lands and the Armenian refusal to live together with Azerbaijanis, all make the case that Armenians have forfeited their right to claim territorial autonomy.  In this, international law was violated, close to 20% of surrounding Azerbaijani territories was occupied and there have been several notable waves of incidents of ethnic cleansing, including the infamous Khojaly massacre.

Those who have proposed the Aland Island model for the region fail to understand the differences between the two pertinent cases. Swedes, who enjoyed a high degree of autonomy within Finland, hardly used arms to dismantle their state or carry out mass campaigns of ethnic cleansing.  On the contrary, they supported Finland’s war to be liberated from Russia.

Thus, the Aland Island solution is neither feasible nor sensible, given the characteristics of the conflict and, notably, the secessionist brand of nationalism among Armenians in seven occupied areas of the Azerbaijani regional territories. Armenians within the Nagorno-Karabakh Autonomous Oblast (NKAO) had a high degree of autonomy within the former Azerbaijani republic of the Soviet empire, during its existence from 1923 to the dissolution of the Soviet Union in 1991. However, Karabakh Armenians instead engaged in a devastating campaign. The recent literature on territorial autonomy indicates that this was more perilous than any other arrangement.

The scholarship on ethnic and nationalist management is divided over the success and failures of ethnic-territorial autonomy.  Those who have worked on post-Soviet ethnic tensions usually argue that territorial autonomy promotes nationalism and undermines stability in newly independent countries.  In many cases, ethnic autonomy triggers separatism. After a bloody violent conflict, ethnic autonomy, when proposed as a solution, is more likely to deepen the cleavages and institutionalize the conflict.

A group of prominent scholars who work on ethnic management, such as Rogers Brubaker, Valerie Bunce, Stephen Watts and Philip G. Roeder offer compelling arguments and evidence against territorial autonomy, which is seen as perpetuating the conflict and wasting the resources of both the affected minority and the central state.  On the basis of events in former Yugoslavia and the Soviet Union, as well as more recently in Iraq, I would argue that ethnic-territorial autonomy risks becoming the most destructive arrangement for all parties in the conflict.

There are four reasons against territorial autonomy. Firstly, it usually deepens insecurities and entrenches polarization. Secondly, it prevents national integration between diverse ethnic groups, undermining social cohesion between ethnicities and thus a diverse society. Thirdly, it usurps the formulation of a shared identity and memory among diverse groups. And lastly, it fosters autonomous and conflict-ridden enclaves with nationalistic political entrepreneurs who care more about their individual interests than the well-being of their grouping.

In short, territorial autonomy promotes primordial ethnic or religious loyalties and deepens divisions between groups. This leads to the phenomenon of an ethnic prison for these groups, as it has become for the Armenians in Karabakh. The studies of Svante Cornell and Jack Snyder independently exemplify how territorial autonomy has become destructive and has led to conflict. Scholars who work on conflict resolution in culturally pluralist societies argue that in areas with a history of violent conflict, territorial autonomy can indeed fuel secessionist movements.

To reiterate: Armenians enjoyed a high degree of administrative and territorial autonomy in the former Soviet state of Azerbaijan. The impending dissolution of the Soviet Union in 1991 emboldened Armenians to fortify their secessionist movement.  When the Armenians of the NKAO voted to secede in the hopes of unifying with Armenia, Azerbaijan stripped the NKAO of its autonomous status.   It is this historical background of the events indicate that the presence of such autonomy germinated the Armenian movement of separatist nationalism and led to the conflict in the Karabakh region.

To stop a ceaseless cycle of violence, which has already wasted scarce economic resources, and instead move toward cultivating conditions of coexistence and integration, the Armenian minority should give up its unrealistic dream of independence.  Azerbaijan should not grant territorial autonomy if they want to establish good neighborly relations with Armenia and free themselves from Russian interference.

In Georgia, the Armenian and Azerbaijani minorities together comprise approximately 12% of the republic’s population and while there are no threats to territorial integrity on the scale as in autonomous areas of Ossetia and Abkhazia, which eventually seceded, there are suggestions that the ethnic autonomy is more likely to lead toward fragmentation of the state and deepen nationalist movements.

Philip G. Roeder’s analytically guided and empirically rooted studies indicate that autonomy incentivizes ethnic separatism by providing resources and motives to nationalist entrepreneurs who advocate secession.  In the Caucasus, especially in the case of the NKAO, autonomy absorbed the already limited resources of newly independent Azerbaijan as much as with the resources of the Republic of Armenia, which hampered both countries from realizing the benefits of full independence.

The Karabakh conflict ended up with both states compromising their sovereignty in their relations with Russia. Armenia, especially, functions as a Russian protectorate.  If Armenia wants to become fully independent and be integrated into the Caucasus region, it must not depend on Russia to the extent that it has. This could only be possible if policy from Yerevan centers focus on the Armenian well-being and work with Azerbaijan to secure minority cultural rights for Armenians in the Karabakh region.

Because of the violent conflict’s history and the evidence of past actions suggesting how ethnic groups are most likely to act in the future, autonomy is likely to foster vengeance and hatred against Azerbaijanis.  The scale of destruction of once lively and productive Azerbaijani cities in newly liberated territories also has underscored the trauma and deep scarring imposed upon by the Azerbaijani population during the Armenian occupation.  Thus, one can see why there is little to no will among the Azerbaijanis to grant any form of autonomy to Armenians.

Araz Aslanli, a political scientist in Baku, confirmed the above in a May 2022 interview with the author: “No autonomy because of two reasons. First, Armenians will use autonomy to prepare for a new war.  Second, Armenians of Karabakh are less than 0.5 percent of the population and who would pay the costs of these separate political institutions? The Republic of Armenia used to divert over $20 million every year to keep these institutions of the NKAO running.  Baku will not and should not do that.”

The conflict is not over.  There are signs of radicalization of Armenians in Armenia and the Karabakh. There are calls for violence against the Pashinyan government. Under the current conditions, the quest for territorial autonomy would be untenable.

Although Armenians still insist either on unifying with Armenia or becoming a Russian protectorate, they ironically attempt to rationalize the argument on the principle of self-determination. Although Armenians of Karabakh declared themselves as the Republic of Arshak, no single state, not even Armenia, recognized this entity legally, as such a move violated every international norm. The first option (i.e., independence or union with Armenia) was defeated and nullified on the battlefield in 2020. However, after the Second Karabakh War, some Armenian scholars seek to promote secessionism as a remedial right, but this is a tenuous argument. The remedial right argument treats secession as a last resort in response to grave injustices as well as the policies of the central government to deny the survivability of an ethnic group. In the case of Azerbaijan, the Armenian minority enjoyed a high degree of autonomy and Baku never tried to take away that autonomy until the NKAO declared its independence in the wake of the geopolitical changes occurring in the republics of the former Soviet Union.  The exercise of the principle of self-determination does not encompass a right to secession, outside the colonial context.  The ideals of remedial right and remedial secession are something new as they only allow secession if and only when grave injustices are inflicted upon the aggrieved minority. None of the international treaty or court decision shrines remedial secession.

It would be imprudent to repeat past mistakes.  Azerbaijan should guarantee minority cultural rights for the Armenians, as is the case with Georgians in the country. Baku covers the cost of education of Georgian schools and supports cultural programming. Azerbaijan should work toward integrating the Armenian minority into Azerbaijani civil society.

To conclude, no form of territorial or ethnic autonomy will improve relations between Armenia and Azerbaijan. Presently, the extremes are problematic in leading to a satisfactory compromise – composed of a demonstrably authoritarian state as well as a minority group which willingly calls for secession for the purpose of destabilizing said state, at enormous economic and political risks. While some nationalist Armenians may find it more convenient to welcome the aid of Russia and its military for its objectives, there also likely are groups, which heretofore have been silent, that would prefer both parties to the conflict pursue a diplomatic compromise and build bridges of economic opportunity to fortify the integrity of their respective independent republics. The disproportionately loud voices of Karabakh Armenians have hijacked the normal project of development and sustainability for Armenia to become a thriving state with economic promise and political stability.

The whole of Armenia should not have to sacrifice its economic and stable political potential for a minority group of Armenians in Azerbaijan, a group that continues to shrink in size. The time is overdue for Armenia to try a different path, mainly by negotiating with Azerbaijan to ensure that the cultural rights of those minority group Armenians are fully guaranteed.