Conventional wisdom suggests the more Israel's relations with Ankara and Erdogan deteriorate, then the more likely the Knesset will recognize the Armenian genocide. There's just one problem: It's not true. 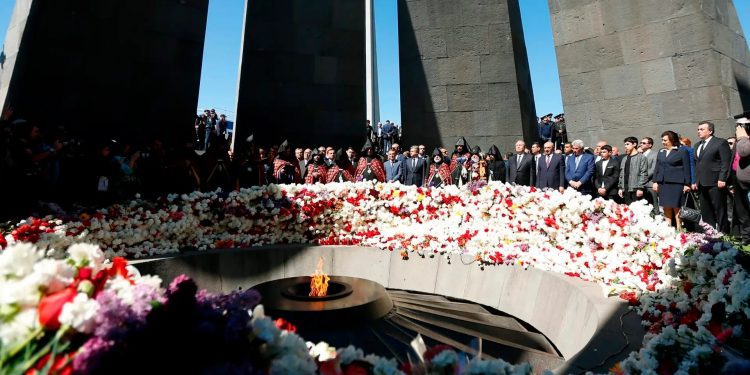 There’s been growing attention given to Israel’s policy on the Armenian genocide over the last two decades. Scholars, practitioners, journalists, activists and the general public are trying to map the different reasons and grievances framing Israel’s firm position: not to recognize the Armenian genocide.

Conventional wisdom points to dictums such as “Israeli relations with Turkey are too important” or that “Israel prefers Azerbaijan to the Armenians.”

However, those reasons are too sweeping to explain a more complex phenomenon: which of Israel’s state institutions refuse recognition, and why.

I would argue that it is quite understandable why both consecutive Israeli governments, and the wider political and cultural spectrum represented in Israel’s parliament, the Knesset, hold what appears to be a wholly pragmatic stance despite it being counter-intuitive to normative and liberal democratic considerations, including the specific historical experience of the Jewish people.

Why does the Knesset fail to pass the Armenian genocide bill time and time again, and how static or fluid is this stance for the future?

First of all: What does “recognition of the Armenian genocide” actually mean? In academic circles, despite the lack of a widely accepted cross-disciplinary definition, the term ‘recognition’ is generally understood  as a normative expression of the acknowledgement of a valuable human need: in this case, the understanding that the Ottoman Armenians experienced a genocide in 1915 and the countering of historical revisionism and denialism.

The legislative act of recognition contributes not only to commemoration, and to preserving Armenian historical heritage, but can also trigger an officially-sanctioned Memorial Day, even a state-backed national commemorative museum. This step is of critical importance to Armenian diaspora communities. Thus, the struggle for recognition is significant for three parties: the Armenians, the Turks (who oppose it), and the countries debating whether to recognize the Armenian genocide.

It is also a step that endorses the values of liberal democracy, by affirming core values such as the protection of human rights, justice and the protection of minorities against discrimination and violence. It also boosts international institutions dedicated to those values, such as the Internal Criminal Court and the UN’s Responsibility to Protect, a 2005 commitment to prevent genocide, war crimes, ethnic cleansing and crimes against humanity.

So, if recognition is a normative step that bolsters liberal democracy, there doesn’t seem an obvious obstacle for Israel. But there are two further, major, factors: Turkey, and the Holocaust.

Despite the cold diplomatic winds blowing between Ankara and Jerusalem for a number of years now, Israel maintains significant economic and strategic ties with Turkey. But if we examine the recognition policy of other states with far deeper engagement with Turkey, we see that there is no longer such an immutable correlation between ties with Ankara and genocide recognition – and the contrast with Israel becomes even more striking.

Take, for example, the legislatures of three NATO members: the United States, Germany, and the Netherlands. Just like Israel, they have been Ankara’s traditional allies since the early 1950s, and just like Israel, they were reluctant to recognize the Armenian genocide for more than 40 years. Their key reason was not to imperil Turkey’s key strategic role in the NATO alliance.

But between 2016 and 2019, something changed: the parliaments of all three countries formally recognized, the Armenian genocide. And their status quo-defying decisions were neither hesitant nor ad hoc.

What had happened? The core trigger was a statement made by Turkish President Recep Tayyip Erdogan.

On 23 April 2014, the 99th anniversary of the genocide, Erdogan noted the deaths of the Ottoman Armenians who had perished alongside millions of people of “all religions and ethnicities” in 1915, describing the tragedy as “our shared pain.”

Although Turkey’s president was finally acknowledging some basic historical facts, and offered his condolences to the Armenians, his message was really a sophisticated form of denial. There was no genocide, and the Ottomans’ successor state, Turkey, had nothing to apologize for.

But despite the obfuscation, his speech opened the door for some countries who wanted to alter their position. Ironically, Erdogan had effectively normalized the process of Armenian genocide recognition.

There were other factors, too, that broke the recognition taboo. There was the crumbling relations between Turkey and its three allies, and the the related progressive weakening of NATO. The process of introspection and eventual acknowledgement of those countries’ own role in the perpetuation of Turkey’s denial. And growing scrutiny of Erdogan’s policies, especially towards the Kurds. Hence, the recognition legislated by Germany, the Netherlands and the United States were a form of normative statement.

So what of Israel? Every April 2th, since 1989, the left-wing Meretz party has attempted and failed to pass the Armenian genocide bill through the Knesset. Erdogan’s 2014 statement made no significant change to their fortunes.

In May 2018, Turkey expelled Israel’s ambassador, Eitan Na’eh, in the wake of the deaths of  61 Palestinians by the IDF in protests following Donald Trump’s recognition of  Jerusalem as the capital of Israel. Erdoğan’s harsh rhetoric included the accusation that the “terrorist state” of Israel was itself perpetrating “genocide” against the Palestinians. But even this crisis didn’t move the dial in the Knesset.

So if changing geopolitical circumstances impacted the three NATO allies, why did it not affect Israel? Because there’s a basic, fixed issue, far less influenced by outside parties and events, but one that uniquely influences Israeli policy in regard to recognition of the Armenian genocide: the memory of the Holocaust as “unique.”

In Israel, there is a commitment to “never again,” a watchword in Israeli society, politics, and diplomacy ever since the birth of the State of Israel. But it has been embraced in its particularist form: “never again” to Jewish vulnerability in the face of murderous antisemitism, rather than the “never again to anyone,” the form in which it is widely understood in, for example, the liberal American Jewish community.

That same particularism works retroactively, too. Analogies to the Holocaust are often slammed as the “trivialization” of Jewish suffering. That anathema to “sharing” the idea of being genocide victims, or the fear of competing genocide commemorations, has a specific locus.

The date of Israel’s Holocaust Remembrance Day is observed according to the Hebrew calendar, but it generally falls in the second half of April or early May. If the Knesset recognized the Armenian genocide, its April 24 Memorial Day would fall in close proximity, actualizing the threat of “competition“ over genocide commemorations.

Despite these significant considerations weighing against recognition, there is still a chance to change Israel’s calculus. The tipping point is less likely to depend on a deterioration of relations with Turkey, or pressure from Azerbaijan, but rather on a strengthening of Israel’s own fractured democratic processes.

That there are problematic checks and balances between Israel’s legislative and executive branches is embodied in the unrestrained power the executive wields over the Knesset.

And because of the peculiarities of Israeli political culture and its unwieldly coalition governments, the executive enforces strict coalitionary discipline for many votes that in other legislatures would be free votes of conscience, or would better reflect the diversity of opinion within political parties.

This is an essential factor in the issue of passing an Armenian genocide bill: because coalition unity takes superiority over the freedom of action of Knesset members, there is very little room for manoeuvre.

With more stable governments giving coalition members more autonomy (a pipe-dream at present) it is likely the Armenian genocide recognition legislation would pass in the plenary, not least if legislators are lobbied by those liberal and younger Israelis who want to amplify the universalistic lessons of the Holocaust. For now, this modest hope will have to suffice.