On October 15, Armenian Prime Minister Nikol Pashinian, in an online summit of the Commonwealth of Independent States (CIS), declared his country’s readiness to provide both railway and highway connection to Azerbaijan, via southern Armenian territories, that would link mainland Azerbaijan with its exclave of Nakhchivan Autonomous Republic. 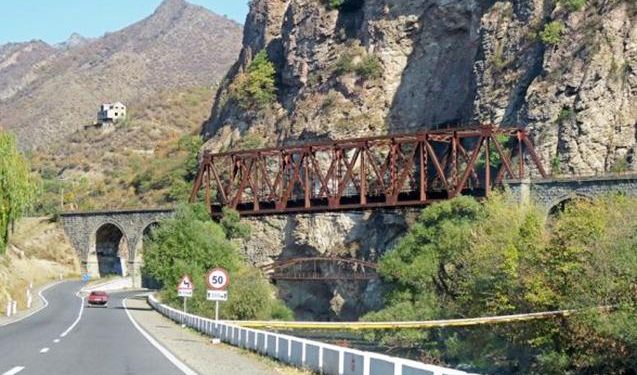 Baku has routinely referred to this overland passage as the “Zangezur corridor,” with a reference to the historical name of what is today Armenia’s Syunik Province (Primeminister.am, October 15). Although Pashinian had previously confirmed the plans for the construction of a railway link between two parts of Azerbaijan via the Meghri region of Syunik Province, he had rejected Baku’s demand for an automobile road along the same route (see EDM, May 24).

This has been one of the major disagreements between Baku and Yerevan since the end of last year’s 44-day Second Karabakh War (September 27–November 9, 2020). Protesting Armenia’s rejection of the highway, Azerbaijan’s President Ilham Aliyev, in an interview with the CNN Turk TV channel, on August 14, reiterated Baku’s insistence on a highway through the Meghri region of Armenia. “It requires both a railway and a highway for the Zangezur corridor to be fully operational. We should be able to get in a car in Baku and comfortably go to Nakhchivan and Turkey” (President.az, August 14).

Therefore, Pashinian’s remarks at the CIS summit were widely interpreted by Azerbaijani experts as Armenia’s consent to the establishment of the Zangezur corridor (BBC—Azerbaijani Service, October 15). It is important to note that the Armenian leader mentioned the opening of a railway and highway between mainland Azerbaijan and Nakhchivan in the context of the unblocking of the larger transportation projects in the region in accordance with the trilateral (Russia-Armenia-Azerbaijan) agreement of November 10, 2020 (Primeminister.am, October 15). This will provide Armenia a railway and highway connection with Russia via the territories of mainland Azerbaijan and a railway link with Iran via the Nakhchivan region.

Although concerns remain amongst some Armenians about the potential dangers caused by the Zangezur corridor (Aircenter.az, October 2021), Armenian leaders are generally excited about the potential benefits the reopening of the country’s closed borders and the unblocking of regional transportation routes would bring to the country. For example, Armenian Economy Minister Vahan Kerobyan anticipates that unblocking transport and economic connections will increase Armenia’s GDP by 30 percent in the course of two years (News.am, September 20). Similar optimism is often expressed by other members of the government, including Prime Minister Pashinian (see EDM, April 5).

This came amidst recent positive developments between Armenia and its Turkic neighbors Turkey and Azerbaijan. Over the last few weeks, Turkey and Armenia have been sending positive messages to each other about new opportunities for the normalization of their bilateral relations and opening of borders (see EDM, October 18). However, while the Armenian side demands that this process begin without preconditions, Turkey has conditioned the normalization of relations between the two countries to Armenia’s consent to the opening of transportation corridors in the region. On September 19, speaking with reporters, Turkish President Recep Tayyip Erdoğan said that Pashinian had sought a meeting with him to discuss bilateral relations and communicated such a proposal to the Turkish side via Georgia’s Prime Minister Irakli Garibashvili (Tccb.gov.tr, September 19; see EDM, October 6). According to Erdoğan, an agreement on the opening of the “corridors” should come first, before his meeting with Pashinian.

The leaders of Armenia and Azerbaijan are likewise negotiating a meeting sometime soon. Both sides have expressed readiness to hold a summit via the mediation of the Minsk Group of the Organization for Security and Cooperation in Europe (OSCE) (Prezident.az, September 28; Sputnik.az, October 2). This news comes against the backdrop of reports and rumors on both sides about the signing of a peace treaty between the two countries in the near future. In mid-September, Hraparak Daily of Armenia, citing its own sources, reported, “It seems that an agreement was reached [between Baku and Yerevan, in Moscow] to start the process of [border] demarcation and delimitation without specifying the status of Artsakh [Karabakh], within the framework of the maps of the Soviet Union” (News.am, September 17). An official statement about the negotiations on a “peace agreement” was made by France’s new ambassador to Armenia, Anne Louyot, who, without disclosing the details, said “we have been working with our Russian and American partners on the process of signing a long-term agreement over Karabakh” (Azatutyun.am, October 12).

Although it is not certain whether Baku and Yerevan will really be able to reach a peace agreement in the near term, the latest developments between them, along with Pashinian’s aforementioned remarks about the Zangezur corridor, raise hopes in this direction. In early October, in a move toward reconciliation, Azerbaijan and Armenia agreed to use each other’s airspace for civilian flights. On October 6, Azerbaijani Airlines started flying through airspace over the territory of Armenia for its connections between Baku and Nakhchivan (Facebook.com/Azerbaijanairlines, October 6). A day after this, Azerbaijan returned one more prisoner to Armenia detained after the Second Karabakh War (Arka.am, October 6). On October 13, the religious leaders of Armenia, Azerbaijan and Russia met the first time since the end of the war and delivered messages of peace (Armradio.am, October 13).

The two South Caucasus countries also plan to re-activate the work of the trilateral (Russia-Armenia-Azerbaijan) working group, which was established during the January 11 trilateral leaders’ summit and tasked with presenting action plans (including implementation schedules) to their governments regarding regional railroad and highway projects (see EDM, January 12). In an interview with the Turkish news agency Anadolu, President Aliyev said the group would meet again in October (Prezident.az, September 28).

Despite these positive trends, there are, however, still threats and challenges to the peace process. For example, recent shootings between the Azerbaijani Armed Forces and Armenian troops stationed in Karabakh (in violation of the November 10 trilateral accord) jeopardize the delicate post-war regional balance (Mod.gov.az, October 13, 14, 15). Nevertheless, as Aliyev recently stated (Report.az, October 15), the situation is generally stable in the region and creates a permissive environment for the implementation of regional transportation and political projects.