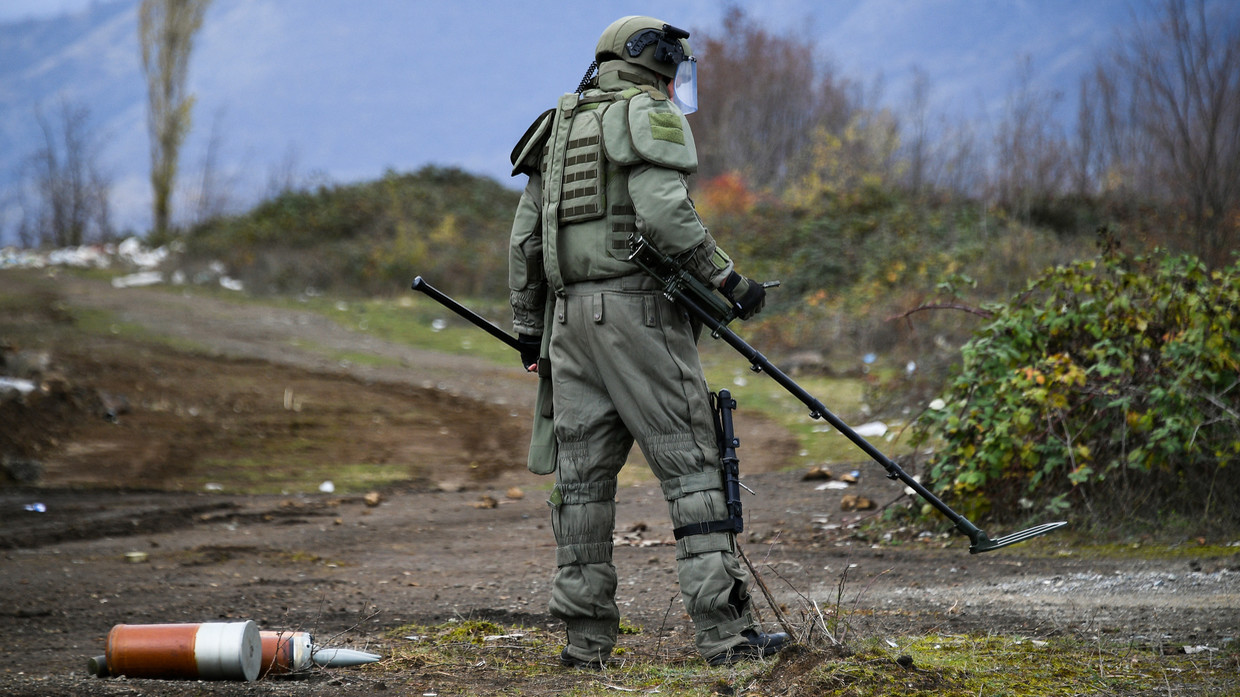 This means that approximately one person is killed by a landmine every hour. Today, 64 countries face the threat of landmines, but a once-and-for-all solution to this problem does not seem likely to be found any time soon. The areas most contaminated by landmines in the world are Afghanistan, Angola and Cambodia. About 10-15 million landmines are estimated to have been planted in Afghanistan.

It is civilians who suffer from landmines the most. People returning to the region after the end of a conflict—children walking in the forest, working in their fields, shepherds grazing their flocks, and so on—accidentally step on landmines buried decades ago and lose their lives. For example, recent (March 2021) reports[1] of migrants in Croatia being killed by a landmine, a 30-year-old remnant of the 1992-1995 Balkan War (involving Serbia, Croatia and Bosnia and Herzegovina), have drawn media attention to this issue. Today, Bosnia and Herzegovina is one of the areas most contaminated by landmines in Europe. According to official data, about 220,000 landmines (mostly anti-personnel) still remain in the country’s soil and have killed 200 people since 1995. Years after the conflict, new landmine explosions prevent the refugees and IDPs from coming back to their homes. Apart from the loss of human lives, the mine infestation has slowed down post-war repatriation, rebuilding and construction work, leading to a decline in economic activity in the region and a low level of development of industry, tourism, etc.[2] 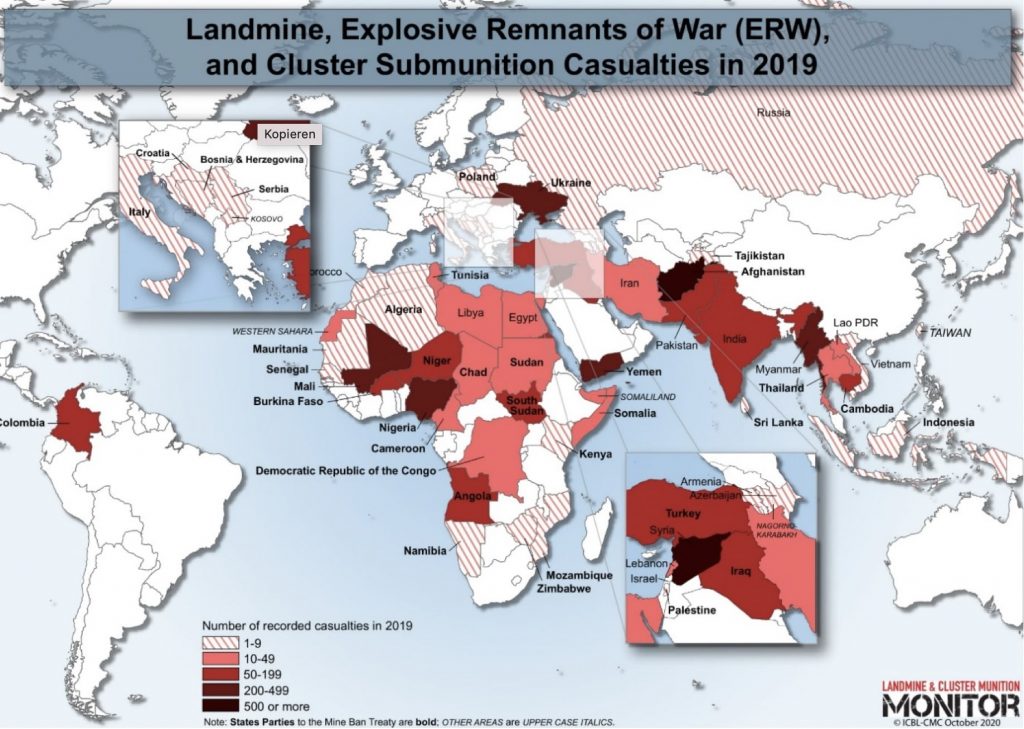 This image[3], provided by Landmine Monitor, shows the world’s map of landmine, ERW and cluster submunition casualties for 2019. As we can see, Azerbaijan is also among the affected areas, but since the number of landmine-related casualties per year here is withing the range of 1-9, Azerbaijan is shown in Group 1 (white-red stripes). The areas with the highest number of casualties (500 or more) are marked in dark carnelian color.

The war did change the situation on both the occupied territories and the mined areas. Naturally, Armenians were able to live comfortably in Nagorno-Karabakh and surrounding districts for 30 years because they knew the location of the mines they had planted, and received assistance in clearing certain areas of landmines from a number of organizations, including the HALO Trust, an international NGO (in addition to mine clearance activities in the “NKR”, the organization also drew maps of the surveyed mined areas[8]). As a result of the Second Nagorno-Karabakh War that lasted from September 27 to November 9, 2020, Azerbaijan was able to liberate and return 7 districts and part of Nagorno-Karabakh. However, the return of people to the liberated areas has turned into a very challenging process. About 1 million refugees and IDPs and their descendants live in Azerbaijan today. Despite official warnings from the authorities, many civilians seeking to return to their former homes, believing that their decades-long sorrow is finally over, kept making their way to the liberated areas only to be killed by landmines planted during the two wars.

Speaking at the International Meeting on Mine Clearance on July 6, 1995, Sadako Ogata, the former UN High Commissioner for Refugees and Internally Displaced Persons, said, “Whatever the present legality of manufacturing [landmines], the toll they take on innocent civilians amounts to a crime against humankind. Those who make them, sell and export them bear a direct and heavy responsibility which has to be recognized and dealt with by the international community.”[10] Indeed, landmines are not only a crime against humankind, but also a crime against future generations.

The 24th International Meeting of Mine Action National Directors and United Nations Advisers was held from 25 to 27 May 2021. The meeting highlighted new approaches to mine clearance, especially high technology and the high role of data/information sharing.[11] Mine clearance is a very difficult and time-consuming process. But slow and expensive as it is, it is not impossible. For example, mine clearance in Mozambique took 22 years, but in 2015 the process was completed and the country was declared mine-free. In 2020, Chile (after 21 years of mine clearance operations)[12] and the British Overseas Territory of Falkland Islands (after 40 years)[13] declared their lands completely free of mines. In the countries where complete peace has not been achieved, the mine clearance process may be prolonged. As a result of subversive activities, new mines may be planted and the work of EOD specialists may be slowed down or new deaths may occur. Therefore, in order to clear an area of landmines, peace must be established and the parties must work together through the exchange of information, recognizing their mutual responsibility.[14],[15]

After the end of the Second Nagorno-Karabakh War, the Azerbaijani side repeatedly appealed to Armenia for peace and called for a restoration of constructive relations. Unfortunately, the Armenian side still harbors the desire for revenge and will not provide minefield maps, which could be the first step to ensuring lasting peace in the region. No matter much time and money it may take, Azerbaijan will eventually free its lands from mines as it has freed them from occupation. However, Armenia’s contribution to this process by providing the maps of the mined areas will benefit both Armenia itself and the restoration of Azerbaijani-Armenian relations. Demining of the region could accelerate the return of IDPs and the economic revival of the region, facilitate the development of Azerbaijani-Armenian relations, as well as open up new opportunities for economic and political cooperation for the entire South Caucasus region. Therefore, we call on Armenia to focus on peace, not revenge, to take a constructive position, not a destructive one, and not to hinder the development of the entire region of which it is part.