Broken-backed but still wheezing and hissing furiously, the Armenian diaspora has launched a new wave of black PR against Azerbaijan. 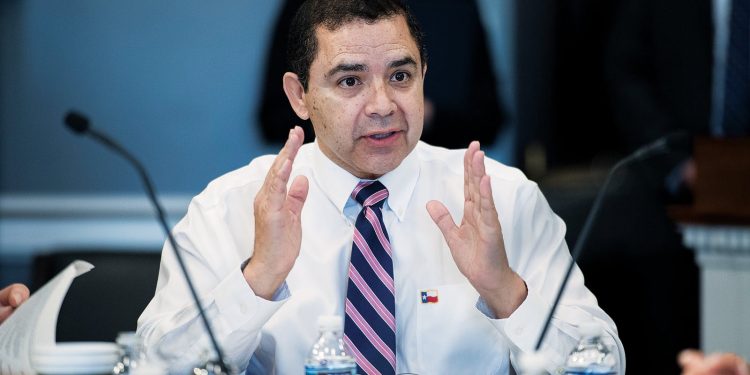 This time, the overseas Armenia has not only engaged all the might of its lobbying potential, but also deployed the “Big Bertha”, that is, its connections in the government machinery, which is something the American Armenians resort to only when they feel that things are getting really tough…

What triggered yet another anti-Azerbaijani campaign was the search conducted by the FBI at the home of Congressman Henry Cuellar, co-chair of the US-Azerbaijan inter-parliamentary group in the US Congress.

It is important to point out here that the scandal around Cuellar occurred six weeks before the upcoming US Congress elections in which the influential lawmaker intended to run for another term.

As soon as the news about the FBI raid on the congressman’s house appeared in the press, the Armenian diaspora rushed without further ado, tongue lolling and drooling, to search for the “Azerbaijani trace”, or, more precisely, for some secret, deep ties between Henry Cuellar and Azerbaijan.

Not only did the statement by the FBI spokesman that the raid on Cuellar’s home had nothing to do with Azerbaijan fail to cool the inflamed imagination of the diaspora leaders—on the contrary, it heated it to the temperature of the charcoal grill in the backyard of Yerevan Steakhouse restaurant in Los Angeles.

“What do you mean, no ties?! There is no way that an American congressman would have friendly ties with Azerbaijan and get nothing out of it!” the American Armenians reasoned, following the logic of their Moscow compatriots. “Didn’t they at least give this Cuellar guy an oil rig?! Or a couple of meters of gas pipeline? Anyway, it’s time to throw some khash on the fan, let them sort it out…!”

This was followed by a series of articles in the American media, paid for by the Armenians, about Cuellar’s alleged “strange”, “highly suspicious”, or even “semi-criminal” ties with Azerbaijan.

And the remarkable thing is that Henry Cuellar is the co-chair of the US-Azerbaijan inter-parliamentary friendship group. Not a group of hatred, aversion or even indifference—friendship.

In other words, the American congressman’s friendly attitude towards Azerbaijan is sort of an operational necessity. Accusing him of being friendly to our country (once again, the FBI made it clear that the search of Cuellar’s house had nothing to do with Azerbaijan) is like looking for criminal motives in a music lover’s love for music. The Armenians just won’t acknowledge the fact that Cuellar was duty-bound to “be friends” with Azerbaijan!

Well, every nation has its own idea of friendship.

One has to hand it to the persistence and, most importantly, the financial capacities of the Armenian diaspora in the United States, who, instead of making the lives of their impoverished countrymen in Armenia a little easier, spend hundreds of thousands of dollars on outright false articles in a number of American media outlets, including HuffPost, baiting ordinary people with pseudo-revelations about a “corrupt congressman” and “Azerbaijani emissaries” who tried to lure a “money-loving politician” in the golden nets of corruption.

If these publications really cared about democracy and transparency in their coverage of US lawmakers’ activities, their articles would be exposing the Armenian mafia and the influential members of Congress bribed by it. It has gotten so far that some US senators and members of the House of Representatives no longer hide that their campaigns are financed from the pockets of the Armenian mafia and diaspora—modestly referred to in official reports as “donations from private individuals”.

Alas, instead of pro-Armenian members of Congress, it was Henry Cuellar who came under attack. A number of American experts are already saying that the case against him doesn’t hold water, and all the uproar over the search in his house is aimed at discrediting the popular Democrat before the elections.

What is especially surprising about this story is the indifference of US officials, with whose tacit consent the Armenian diaspora has lynched the congressman in the press. Henry Cuellar was virtually left to be torn apart by Armenian mafia and diaspora leaders, who make no secret of their anger over the lack of US engagement during the second Karabakh war. Who knows, maybe the American political establishment deliberately sent Henry Cuellar to the slaughter in order to placate the large Armenian community before the congressional elections?

It is quite possible—especially since, according to the plan of the minds behind the election campaign, Henry Cuellar’s seat in Congress should be taken by a pro-Armenian politician.