Armenia could loosen Russia’s grip on the South Caucasus

Only through breaking Armenia’s dependency on Russia—through renormalization with Azerbaijan and Turkey—will the region’s true economic potential be unleashed. 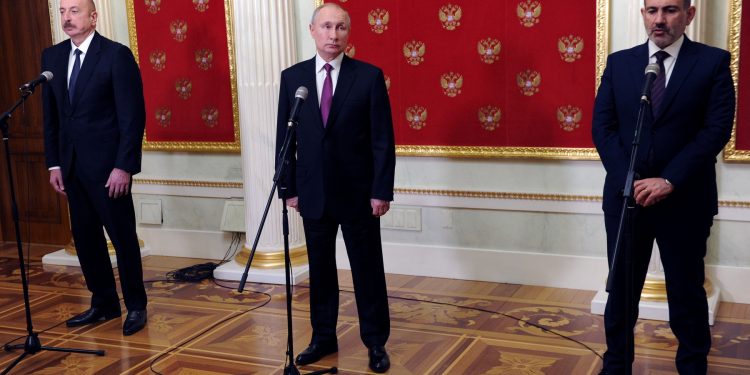 Russia's President Vladimir Putin, Azerbaijan's President Ilham Aliyev and Armenia's Prime Minister Nikol Pashinyan attend a news conference following their meeting to discuss the implementation of the ceasefire over Nagorno-Karabakh reached on November 9 and measures to solve problems in the region, in Moscow, Russia January 11, 2021. Sputnik/Mikhail Klimentyev/Kremlin via REUTERS ATTENTION EDITORS - THIS IMAGE WAS PROVIDED BY A THIRD PARTY.

On January 14, 2022, Turkey and Armenia will begin talks aimed at reopening Europe’s final Cold War-era closed border. The historic move, supported by the West, promises to fundamentally reconfigure the South Caucasus—and Russia’s sway within it.

Blocked borders, jagged pipelines, and irrational freight routes speak to the region’s limitations, all of which have played to the former imperial power. Russia prefers these countries to be at odds as it hands Moscow economic and political leverage while stifling solidarity against it.

Should the countries remain at odds, a landlocked Armenia will suffer under the weight of regional isolation. To the west lie the closed border with Turkey and the freight lines to Europe. To the east lie the equally sealed border with Azerbaijan and the gateway to central Asia. Yet the primary rationale for keeping both borders closed has disappeared: the occupation of almost one-fifth of Azerbaijan—according to the UN Security Council—since the 1990s.

As the USSR crumbled, the neighbors fell into conflict over the mixed region of Karabakh. The 2020 Nagorno-Karabakh War reversed most of Armenia’s land grab. Since then, Baku has favored open borders and logistics lines. So too has Turkey, who closed its border in solidarity with ally Azerbaijan after the first war. With the status quo altered and some necessary space between the conflict, now there is an opening for change.

Without open borders, the region’s economic potential remains locked. But if open borders and restored rail lines become a reality, Armenia could create the fastest freight line between East Asia and Europe.  An alternative route would also weaken East Asia and Europe’s reliance on Russia. Cooperation in the South Caucasus also fuels greater prosperity and helps the region stand on its own feet.

But there are other barriers to overcome. It is not simply solidarity with Azerbaijan that has structured Turkey’s relations with Armenia, but a contested history. At its core is the killing of 1.5 million ethnic Armenians during World War I. Since then, Armenia has characterized said acts as genocidal but Turkey disputes the label despite recognizing atrocities were committed by the Ottoman empire. It remains a thorny issue between the two nations.

As for Azerbaijan, wounds are still raw in Armenia since the closure of the 2020 war. Being the victor of the 2020 conflict, it may be easy for Baku to talk up renormalization in its wake. Selling a radically different future from the moral puncture of defeat—with former foes establishing trade and diplomatic relations—is another matter.

Given the discontent now playing out within Armenia, the difficulties are clear. Detainees released from Azerbaijan—which the government had lobbied for—were condemned by the speaker of the house as being deserters and traitors, sparking protests from the parents. Many are looking for someone to blame, scapegoats permitted.

Before he became prime ministership, Nikol Pashinyan had championed himself as a reformer following the 2018 protests against a corrupt ruling elite. Those he had toppled led the counter-offense after defeat in the war, staging an unsuccessful coup. They were the militaristic parties that had ruled Armenia for much of its independence and had shunned compromise to resolve the long-frozen conflict. Many were themselves from Karabakh and based their legitimacy—often to deflect from accusations of graft or incompetence—on the struggle for the territory.

Having survived the junta’s unsuccessful coup d’etat, Pashinyan is now talking up cooperation with Armenia’s former enemies. This has again earned him another chorus of traitor. Yet despite the pressure he is experiencing, he must remain steadfast. He won a renewed mandate postwar to chart a different path from the discredited elite of the past: turning away from Russia and toward the West.

If anything, however, Russia’s grip has tightened over Armenia’s sovereignty, with Moscow’s peacekeepers stationed in Karabakh. This growing dependence was neatly delineated by the recent upheaval in Kazakhstan. As part of the Russian-controlled Collective Security Treaty Organization, Pashinyan sent Armenian troops to quell the protests.

This rankled a domestic population who did not see Russia’s sweep to its aid in a time of need. It was also viewed at odds with the prime minister and his supporters’ politics. The Kazakhstan protests his troops helped quell differed little from the 2018 Velvet Revolution that had swept him to power. But power politics prevailed over values. Pashinyan had little choice but to follow orders. Only through breaking Armenia’s dependency on Moscow—through renormalization with Azerbaijan and Turkey—will that change.

The first president of an independent Armenia, Levon Ter-Petrosyan, spoke of compromise following the first Karabakh war to stabilize the region and entrench national sovereignty. He was toppled by the same forces that now threaten Pashinyan. But the current prime minister must hold out. Economic prosperity not only for Armenia, but for the whole region—and then throwing off the Russian yoke—will be the reward.

Colonel (Ret.) Wes Martin has served in law enforcement positions around the world and holds an MBA in International Politics and Business.