Azerbaijan continues NATO cooperation, despite the rhetoric and negative press

Azerbaijan is a nation friendly with NATO member Turkey. Since May 4, 1994, Azerbaijan has cooperated with the NATO Partnership for Peace Program. Trend News Agency reported this cooperation as “extremely effective” for the past 27 years and one day since it was established. 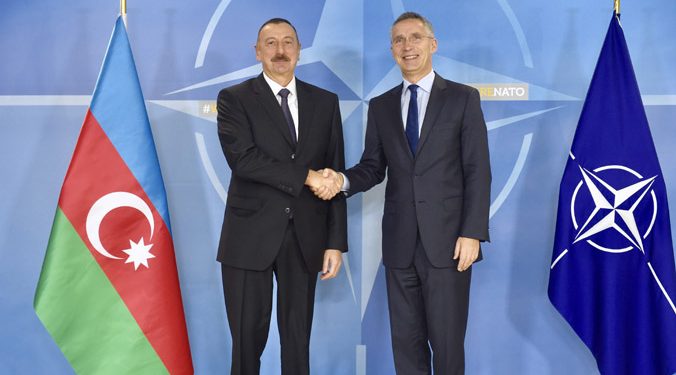 AzMission NATO commented on the efficacy of this signed agreement on May 4.

“Azerbaijan and NATO have jointly made significant achievements in line with the purposes and principles of PfP,” tweeted AzMission NATO.

A chorus of voices joined in saying that it was “within the best interests” of NATO to continue the promotion of Azerbaijan as a free and developed state. This comes after the politicization of rhetoric from the Biden administration concerning Azerbaijan and Turkey.

This was an issue that was discussed recently by the heads of state over Turkey and Azerbaijan, Turkish President Erdogan, and Azerbaijani President Ilham Aliyev. The region considers the nomenclature used by the Biden administration to describe the partial ethnic cleansing of Armenians from Anatolia during WWI as a “historical mistake.” This opinion was formed because the pogroms against minorities in that era were politically driven, targeting multiple ethnicities including those of Turkic descent, across both lines.

In other developments, The Atlantic Council recently urged NATO to give Ukraine non-member ally status

Haaretz. Regional institutions call for an unbiased historic inquiry into these events to depressurize the current politicization of them.

The circumstances of the Anatolia-Caucasus region massacres pre, during, and immediately following WWI have been the talking point of heated conflict-fueling rhetoric between nations of the region ever since.

Both heads of state considered the statement made by Biden as “unacceptable” which has led to the analysis that the relationship between the United States and Turkey as a NATO member has reached an all-time low. Turkey and Azerbaijan continue their cooperation, as Aliyev pledged that the two states would continue to strengthen ties despite current western rhetoric.

Trend News reported that, as part of its participation programs, Azerbaijan is an active participant in peacekeeping missions within Afghanistan. U.S. Secretary of State Anthony Blinken reportedly praised Azerbaijani President Aliyev for this recent cooperation. Aliyev likewise stressed the vital importance of Azerbaijan’s role in the Afghanistan peacekeeping missions from their outset.

The Azerbaijani MOD’s statement regarding Afghanistan peace missions appeared on MOD.gov.az as follows:

On October 2, 2009, the National Assembly (Milli Majlis) of the Republic of Azerbaijan adopted a decision to double the quantity of peacekeeping contingent in Afghanistan.

On purpose to increase the contribution of the peacekeeping contingent of the Republic of Azerbaijan in NATO-led ISAF mission in Afghanistan, the number of the peacekeepers increased to 94 personnel by deploying 4 officers – two medical officers and 2 military engineers on October 5, 2010.

On October 5, 2010, two medical officers and 2 military engineers were deployed to the mission on purpose to increase the contribution of the peacekeeping contingent of the Republic of Azerbaijan in the NATO-led ISAF mission in Afghanistan.

Following this support, in 2015, Azerbaijan served a 6-month rotational “Resolute Support” as noncombatants in Afghanistan. See the full list of NATO-support missions here.

The BBC reported this week that the U.S. has proceeded with the agreement to formally withdraw U.S. troops and NATO troops from Afghanistan. The conflict between the Afghan government and the Taliban is expected to continue as these forces remove. In 2020, NATO’s Deputy Secretary-General for Political Affairs and Security Policy James Appathurai told the Russian press the “excellent cooperation” that NATO has with non-member state Azerbaijan. Baku is not an ally of Russia but likewise does not seek direct membership with NATO.

“Azerbaijan is characterized by its own unique orientation: Baku is not an ally of Russia, but it does not seek membership in NATO. We have excellent cooperation with Azerbaijan. A good example is that it hosts meetings between our military leadership and the Russian top military leadership on its territory. We are developing important cooperation in this direction,” Appathurai told Russian newspaper Nezavisimaya Gazeta, as he was quoted by AzerNews on April 13, 2020. For more background on Azerbaijan’s independent cooperation with the alliance, see Independent Azerbaijan.

“NATO officials also emphasize that Azerbaijan is an important political player not only in the region but also beyond, stressing that there are very good opportunities for global cooperation between Azerbaijan and NATO because of the geostrategic position of Azerbaijan is especially important for the NATO member-states,” wrote Trend News.

A stronger Azerbaijan offers support to Afghanistan as it faces the issue of the Taliban post-U.S. direct involvement

As the United States prepares to ultimately pull out of Afghanistan, as was reported by the Associated Press, Azerbaijan’s continued friendliness with Afghanistan continues to be of importance to a country that will be faced with the questions of a resurging Taliban. Azerbaijan and Afghanistan have been in talks to forward cultural cooperation over the last few weeks as the official U.S.-NATO withdrawal progressed, wrote AzerNews on April 12.

Cultural cooperation measures have followed on the recent agreement between Azerbaijan, Afghanistan, and Turkmenistan to sign a trilateral roadmap for cooperation on Eurasian connectivity, see the Jamestown Foundation.

Western emphasis on post-deployment Afghanistan may open door to better communication between U.S.-Azerbaijan

The west continues to see Afghanistan as an important factor in its struggle with China, Russia, and Iran, see this commentary by Rep. Michael Waltz.

Azerbaijan’s increasing mobility in the region as it emerges from the Karabakh conflict likewise gives it a more stable position as a mediator and diplomatic ally of Afghanistan. As part of the emphasis western defense analysis now places on Afghanistan’s post-U.S. direct involvement security, the U.S. and Azerbaijan are in a position to increase positive collaborative communication on behalf of shared regional interests in peace and security.