‘We reject the allegations of any third party’s presence near the Azerbaijani-Iranian border,’ says Azeri Foreign Ministry as Tehran’s military holds drills near the border. 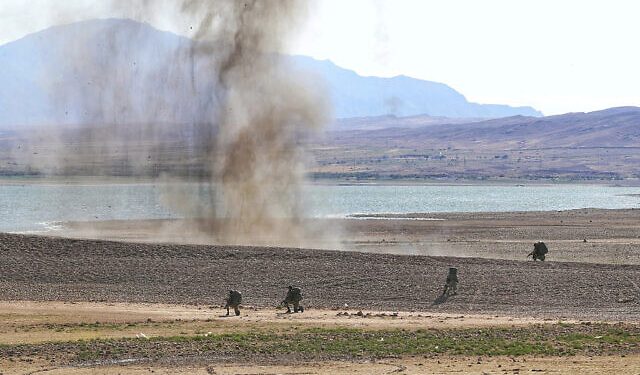 In this photo released by the official website of the Iranian Army on Friday, Oct. 1, 2021, ground force troops partake in maneuvers near the Iranian border with Azerbaijan. (Iranian Army via AP)

Azerbaijan on Monday denied allegations from Tehran that Israel’s military was in the Caucasus country during drills run by Iran’s army on their shared border.

The Iranian claims about sworn enemy Israel come after its state television last week showed tanks, howitzers and helicopters firing at targets in the northwest of the country.

Israel is a major arms supplier to Azerbaijan, which last autumn won a six-week war with neighbor Armenia over the disputed Nagorno-Karabakh region.

Azerbaijan’s President Ilham Aliyev last week criticized the Iranian war games in an interview with Turkish news agency Anadolu, asking “why now, and why on our border?”

Israel came under diplomatic fire from Armenia during last year’s conflict between the Caucasus neighbors.

The fighting ended with a Russian-brokered ceasefire that saw Yerevan cede swaths of contested territories, including a section of Azerbaijan’s 700-kilometer border with Iran.

Azerbaijan and Iran have long been at loggerheads over Tehran’s backing of Armenia in the decades-long Karabakh conflict. Relations recently soured further after Azerbaijan’s army held joint drills with Turkey and Pakistan, 500 kilometers from the country’s border with Iran.

Tehran has long been wary of separatist sentiments among ethnic Azerbaijanis, who make up around 10 million of Iran’s 83 million people.