Tensions between Azerbaijan and Iran are running high over allegations of Israeli military presence, with more military drills planned. 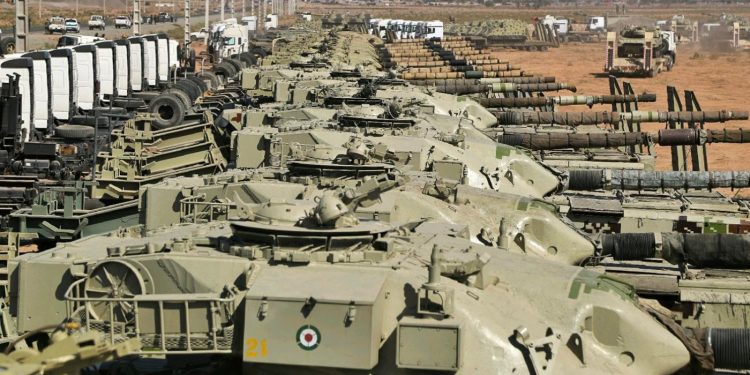 Iranian army tanks during a military exercise in northwest of the country, close to the Iranian Azerbaijani border, on 1 October 2021 (Iranian Army office/AFP)

Azerbaijan on Monday denied Iranian allegations of Israeli military presence on its soil, as Tehran conducted large-scale army drills along its border with its Caucusus neighbour.

Iranian state television on Friday showed footage of tanks, helicopters, artillery and soldiers being deployed in an unspecified area northwest of the country.

Tensions between Baku and Tehran are running high following last year’s conflict in Nagorno-Karabakh. Last year Azerbaijan effectively deployed Israeli “Kamikaze” drones which, along with Turkish military and technical assistance, helped the country in its military victory over neighbouring Armenia.

Israel has cultivated deep ties with Azerbaijan, a Caucasus country strategically located on Iran’s northern border. Tel Aviv has supplied the country with military technology and armed drones, while speculation has long swirled around that Israel uses Azerbaijan as a listening post on Iran and even maintains secret military bases in the country.

A 2009 State Department cable made available by Wikileaks stated, “Much like Israel, Azerbaijan perceives Iran as a major, even existential security threat, and the two countries, cooperation flows from this shared recognition.”

Azerbaijan’s President Ilham Aliyev last week criticised the Iranian war games in an interview with Turkish news agency Anadolu, asking, “Why now, and why on our border?”

Against the backdrop of the Iranian military build-up, the Turkish Ministry of National Defence announced Monday that it plans to hold joint military exercises in Azerbaijan later this week.

Tehran has supported Orthodox-Christian Armenia in its feud with Muslim-majority Azerbaijan over the breakaway province of Nagorno Karabakh, a region populated mainly by ethnic Armenians but claimed by Azerbaijan.

The most recent fighting in Nagorno-Karabakh ended with a Russian-brokered ceasefire in November 2020 that saw Armenia cede swathes of contested territories, including a section of Azerbaijan’s 700-kilometre border with Iran, to Baku.

Tehran is also wary of separatist rumblings amongst its own Azeri minority, which comprises roughly 16 percent of the country’s total population, with sizable numbers living in Iran’s northwest provinces.