Azerbaijan's Foreign Ministry on Sunday called a speech by U.S. House Speaker Nancy Pelosi supporting Armenia is "deeply regrettable" and will "escalate tension" amid her visit to the country and a rise in conflict at the Armenia-Azerbaijan border. 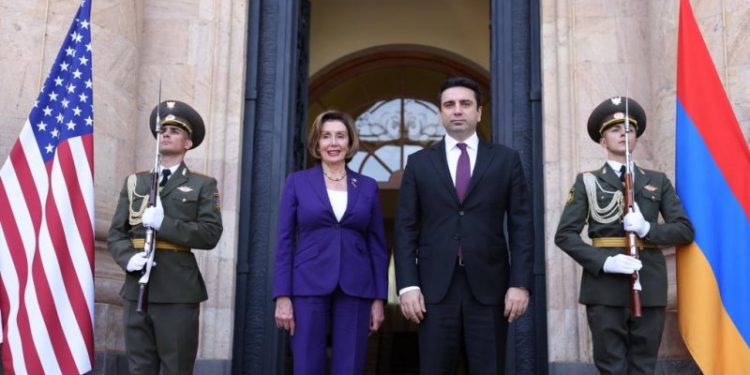 Pelosi led a congressional delegation to Armenia on Saturday to meet with her counterpart in Yerevan after clashes over the disputed territory of Nagorno-Karabakh last week left more than 200 people dead.

“We planned this trip before the assault on the border of Armenia took place,” Pelosi said during a press conference with Alen Simonyan, the Speaker of the Armenian National Assembly.

Pelosi noted that the U.S. Congress in 2019 passed legislation in which the U.S. formally recognized the Armenian genocide, which President Joe Biden made official last year.

“Armenia is of particular importance to us because the focus on security following the illegal and deadly attacks from Azerbaijan on Armenian territory,” Pelosi said.

“We strongly condemn the attacks, we and our delegation, on behalf of the Congress, which threatens prospects for much-needed peace.”

Simonyan in a statement to Twitter called the meeting a “productive discussion.”

Pelosi’s visit came after Russian President Vladimir Putin on Friday met with Azeri President Ilham Aliyev on the sidelines of the Shanghai Cooperation Organization’s Summit in Uzbekistan, hoping to mediate a solution to the conflict.

Azerbaijan’s Foreign Ministry said in its statement that Pelosi’s visit to Armenia “distorts the situation in the region.”

“Groundless and unfair accusations made by N. Pelosi against Azerbaijan are unacceptable,” the Azeri statement reads.

Azerbaijan’s Foreign Ministry said that the incidents at the border from September 12-13 were “a large-scale military provocation by Armenia against Azerbaijan.”

“This provocation was prevented by the Armed Forces of Azerbaijan, and the sovereignty and territorial integrity of our country was ensured,” Azerbaijan’s Foreign Ministry said.

Azerbaijan’s Foreign Ministry added that Pelosi is “known as a pro-Armenian politician” and said that her visit to Armenia “is a pure evidence of this.”

“Considering that the period of mid-term elections to the U.S. Congress is approaching, it seems that N. Pelosi is using this visit for her domestic political agenda and to gain the support of the Armenian lobby circles in the U.S.,” the statement reads.

Azeri officials called it “unacceptable” for an American political leader to shift from lobbying on domestic political agenda to lobbying on one focusing on the Caucus region.

“Such unilateral steps and groundless statements serve not to strengthen the fragile peace in the region, but, rather to escalate tension,” the statement reads.

Pope Francis on Sunday urged Armenia and Azerbaijan to respect a ceasefire amid the latest border clashes between the two countries.

“Let us not forget that peace is possible when weapons are silenced and dialogue begins,” Francis said. “And let us continue to pray for the suffering people of Ukraine and for peace in every land bloodied by war.”