Azerbaijan and Turkey on Wednesday lauded Pakistan for the role it has played in promoting peace in the region, especially the country’s efforts for peace in Afghanistan. 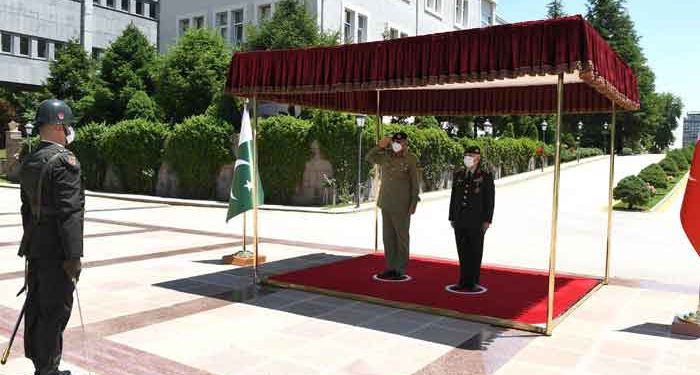 The military’s media wing said that the Azeri officials and the army chief discussed “matters of mutual interest, bilateral defence and security cooperation, regional peace and stability, and cooperation in energy, trade and connectivity projects”.

“Emerging geo-strategic paradigm in the region necessitates our close cooperation and collective response against common challenges,” Gen Bajwa told the officials. He also called for an increase in the “mutually beneficial engagements at all levels and forums” between Azerbaijan and Pakistan.

The ISPR said that the Azeri officials recognised the high standards of professionalism of the Pakistan Army. They also lauded the army for its “contributions for conflict prevention in the region especially efforts for bringing peace in Afghanistan”.

After his trip to Azerbaijan, Gen Bajwa landed in Turkey for a day-long visit and met senior officials of the country.

As per the ISPR, the Turkish officials and the army chief discussed matters of mutual interests, the regional security situation including the recent developments in the Afghan peace process, and bilateral defence and security cooperation.

The military’s media wing said that Gen Bajwa appreciated Turkey’s engagements with Pakistan, especially the ongoing efforts for peace in the region.

“Turkey is one of the key Muslim countries in the region and enhanced Pakistan-Turkey cooperation will have a positive impact on regional peace and stability,” Gen Bajwa told the Turkish officials.

The ISPR said that the Turkish officials appreciated Pakistan’s positive role in regional peace and stability, especially the Afghan peace process. They also pledged to continue working on improving relations between the two countries.

Earlier on arrival, Gen Bajwa was also presented with a Guard of Honour by a smartly turned out military contingent.

Russian Orion is unlikely to become a Bayraktar “killer”, because…