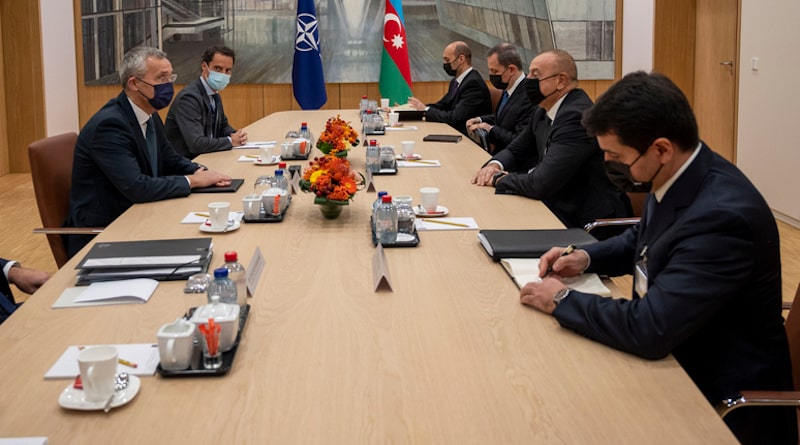 Being the seventh visit of President Aliyev to the NATO Headquarter, the visit celebrated the fruitful and multilayered cooperation between Azerbaijan and the transatlantic alliance in many areas.

Azerbaijan, as many other former Soviet states, embarked on the cooperation with the NATO in mid-1990s when the country led by the former President Heydar Aliyev joined the Partnership for Peace (PfP) programme. This opened a new chapter in the bilateral relations which had started in 1992 when Azerbaijan joined the North Atlantic Cooperation Council (the predecessor of the Euro-Atlantic Partnership Council, which brings together the NATO members and partner countries in the Euro-Atlantic area). Since this time Azerbaijan proved to be a reliable partner of the Alliance providing critical contribution in efforts against many security challenges.

Azerbaijan was one of the first countries to declare unwavering support to the United States after 9/11 and sent troops to Afghanistan and, later, Iraq. While other countries reduced their troop presence in Afghanistan, Azerbaijan, as the only Muslim-majority partner of the NATO in the mission, increased boots on the ground from ninety-four to 120 in early 2018, reaffirming its support of its Western allies.

Azerbaijan has also provided critical transportation passage for NATO; approximately forty percent of cargo destined for NATO troops in Afghanistan passed through the country. From 2015 to August 2021, Azerbaijan participated in the NATO Resolute Support Mission in Afghanistan. Azerbaijan’s support for the Afghanistan mission continued even after the Taliban announced it would take full control of the country. A 120-man peacekeeping unit from the Azerbaijan Army, together with Turkish troops, ensured the security of Kabul International Airport until the end of August, providing the necessary security for the safe evacuation of civilians and troops. NATO’s Secretary-General Jens Stoltenberg thanked President Aliyev for this important role underscoring that “Azeri forces played an important role providing security at Kabul airport during this summer evacuation.”

The bilateral cooperation between the sides have been also an impactful factor in the modernization of the Azerbaijani Armed Forces. Azerbaijan has taken serious steps to bring its Armed Forces in line with NATO standards. Since 2002, more than 30 Azerbaijani officers have served at NATO headquarters and agencies. Practical projects between Azerbaijan and NATO, such as the Saloglu and Jeyranchol projects on clearing mines and unexploded ordnance, have been successfully implemented.

The NATO-Azerbaijan relations have been buttressed by the Alliance’s unequivocal support to the sovereignty and territorial integrity of Azerbaijan. This support was reflected at the final documents of several summits which, on the one hand, expressed support to Azerbaijan’s territorial integrity, on the other hand, stressed the importance of resolving of the conflicts in the South Caucasus, including the former Armenian-Azerbaijani conflict, on the basis of norms and principles of international law.

During the 44 Day War between Armenia and Azerbaijan in late 2020, NATO called for a ceasefire and the negotiated resolution of the conflict. Hereby NATO rejected the calls by the Armenian leadership for an interference. Receiving the Armenian President Armen Sarkissian on October 21, 2020, amidst the hostilities in Karabakh, Secretary General Jens Stoltenberg said “I reminded the [Armenian] president that NATO is not part of this conflict.”

The statements and documents of the NATO following the war demonstrated that the Alliance accepts the new realities in the region created by the liberation of the occupied territories of Azerbaijan and thus treats the conflict as over. For instance, as opposed to expectations of some Armenian observers, the Communiqué of the NATO summit in Brussels in June this year did not mention the former Armenia-Azerbaijan conflict. In the press conference following his meeting with President Aliyev on December 14, Secretary-General Stoltenberg backed the normalization of the relations between Baku and Yerevan saying, “We support efforts aimed at normalizing and dialogue between the [two] countries”.

These relations between Azerbaijan and NATO have been possible thanks to Azerbaijan’s pursuit of the principles of multilateralism and balanced approach in foreign policy. Despite the fact that the country is located in a very contested region surrounding by Russia and Iran and was stuck in a territorial conflict with Armenia that kept 20 percent of Azerbaijan’s territories under occupation for up to 30 years, Azerbaijan has been successful to protect its independence and multilateralism in foreign policy.

This principled position has been also appreciated by the partners of the country in the West as well as Russia which is manifested by the fact that Azerbaijan hosted 7 meetings of high-ranking military officials of NATO-Russia and the United States-Russia from 2017 to 2020.

The resolution of the Armenia-Azerbaijan conflict and hereby the liberation of the occupied territories of Azerbaijan provide the country’s leadership with an important leverage to navigate in the growingly conflictual international relations more independently. There are, however, some new threats and challenges for Azerbaijan as exemplified by the latest tensions in the Iran-Azerbaijan relations. It is therefore important for the EU and NATO to increase their support to Azerbaijan and help the country confidently counter the challenges to its independent and multilateral foreign policy.

Dr. Vasif Huseynov is a senior advisor at the Center of Analysis of International Relations (AIR Center) in Baku, Azerbaijan.