Azerbaijani troops are going to Turkey to participate in commando courses as part of a broader Turkey-Azerbaijan agreement on military cooperation, AzerNews reported on Monday. 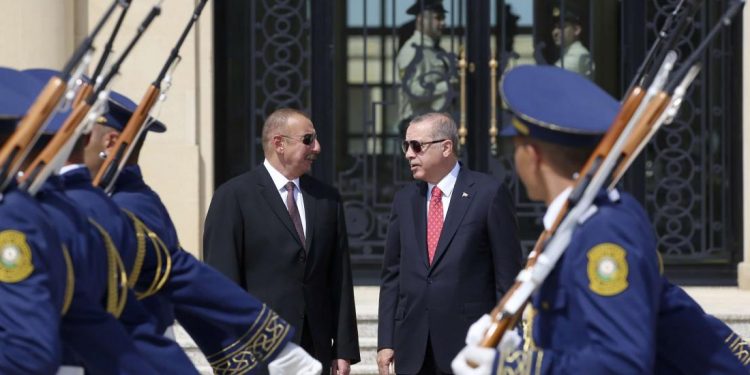 Azerbaijani Deputy Defence Minister Karim Valiyev congratulated troops at a ceremony and spoke about how Baku values its expanding military cooperation with Turkey. He also talked about the country’s victory over Armenia in last year’s Nagorno-Karabakh war, and veterans of that war were awarded medals, AzerNews reported.

Turkish President Recep Tayyip Erdoğan and his Azerbaijani counterpart Ilham Aliyev signed an agreement on June 15, during the former’s visit to Azerbaijan, which includes expanding military cooperation between the two countries.

Under the Shusha Declaration on Allied Relations, both countries pledged “joint efforts for the restructuring and modernisation,” of their respective armed forces, AzerNews said.

Erdoğan also announced that Turkey would build a factory in Azerbaijan to share technology and jointly manufacture military equipment, Hurriyet reported on Monday.

Turkey exported its signature Bayraktar TB2 drone to Azerbaijan last year, just before the Nagorno-Karabakh war. Such drones were credited with enabling Baku to capture disputed territories from Armenia.

Demir, speaking on the sidelines of the Antalya Diplomacy Forum over the weekend, said that Turkey and Azerbaijan should act upon their long-standing motto of “one nation, two states”.

“We think that the two countries will go into a cooperation that will complement and strengthen each other, whether we build another model (of drone) there,” Demir told Hurriyet. “The defence industry is an area that requires significant resources. Then we must use our resources very effectively.”