Anti-Azerbaijan propaganda campaigns in Russia are another concern; some individuals have openly discussed the possibility of “a tactical nuclear missile attack” against Baku. 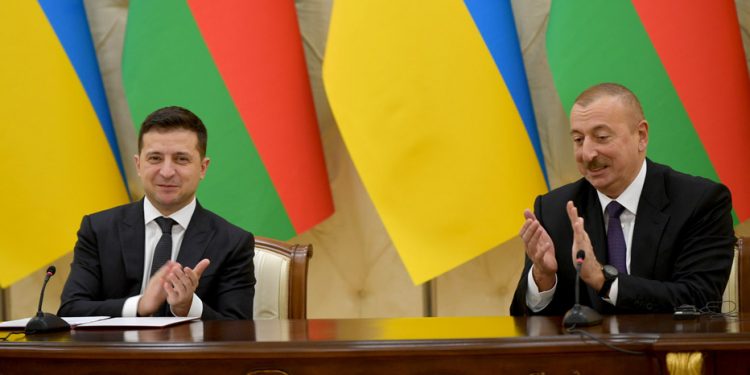 Post-Soviet countries have come under scrutiny over their policies regarding the Russian invasion of Ukraine. The three Baltic states (Estonia, Latvia, and Lithuania) and Moldova have taken clear anti-Moscow stances, with Chisinau even going as far as applying for European Union membership; on the other hand, Belarus has been very clear in its support of the invasion. As for the governments across the Caucasus and Central Asia, they have taken more cautious approaches. One good example situation is Azerbaijan, as Baku has generally maintained cordial and strong relations with Moscow, while at the same time taking subtle steps to assist Ukraine.

A summary of what the Azerbaijani government has done since the war started in February helps put the situation in the proper perspective. Humanitarian assistance has been a critical aspect of Baku’s recent activities. For example, on 20 April, the Moldovan Ministry of Defense explained that Moldovan troops will distribute to Ukrainian refugees medical supplies sent by Azerbaijan, among other donors. The aid was “transported with the help of technical units from the National Army to the San Farm Prim warehouse in Chisinau,” the Ministry explained.  On 21 April, the news agency Azertac reported that Baku sent a total of 170 tons of medicines and supplies worth 3.37 million manats ($1.9 million USD), as well as food products worth 1 million manats ($588,000) to Ukraine, via Warsaw airport. As of late April, “the total amount of humanitarian aid provided by Azerbaijan due to the crisis in Ukraine is 27.6 million manats (about 15 million euros) and weighs 720 tons.”

Another important development has to do with oil, specifically SOCAR Energy Ukraine, the subsidiary of the Azerbaijani State Oil Company. The company has reportedly provided 100 tons of fuel for ambulances and vehicles operated by Ukraine’s State Emergency Service.

Additionally, the Azerbaijani government has not recognized the separatist regions of Donetsk and Luhansk. As Mary Glantz, the U.S. State Department Senior Fellow at the United States Institute for Peace, explains, “Azerbaijan has a historically strong relationship with Ukraine, which has voiced support for the integrity of Azerbaijan’s internationally recognized territory throughout the Nagorno-Karabakh conflict.”

On the other hand, Baku has gone to great lengths to avoid arousing Russia’s ire during this sensitive period. The government has continued to follow its balanced foreign policy doctrine and did not join international sanctions against Russia. In March, at a United Nations General Assembly vote which condemned the Russian invasion, Azerbaijan did not vote. The country took similar action with regards to a US-sponsored resolution in April calling for Russia’s suspension from the UN Human Rights Council.

These events occurred not long after Azerbaijan and Russia signed a “declaration on allied interaction” on February 22,  two days before Russia launched an all-out attack against Ukraine. Although some Caucasus-watchers viewed this agreement as Azerbaijan’s bandwagoning with Russia’s Ukraine policy, later events showed that Baku, in tandem with Ankara, has taken very significant and praiseworthy steps to support Kyiv during its time of need.

So far, what has differentiated Azerbaijan from other Eastern Partnership states is that Baku has remained fairly committed to its pragmatic foreign policy concerning bilateral relations with Russia due to a variety of reasons, the Karabakh issue being the main one. Ukraine and Western partners seem to understand this aspect of Azerbaijan’s calculated balancing and the logic for this strategy. Medical donations and energy supplies to Kyiv (and Chisinau) have been well received as well; Ukrainian President Volodymyr Zelenskyy held a phone call with Azerbaijani president Ilham Aliyev on 28 March, in which he “thanked [his Azerbaijani counterpart] for the humanitarian aid provided to Ukraine, including medical supplies.”

Azerbaijan is in a complicated situation nowadays. The country had a brief war with Armenia in 2020 over Nagorno-Karabakh; while Baku was victorious on the battlefield, a consequence of the war was a greater Russian presence in the region, including some two thousand Russian peacekeepers between the two countries. Azerbaijan has also likely seen what has happened to regional governments that are vociferously anti-Moscow, namely Georgia in 2008 and Ukraine in 2014 and 2022.

Anti-Azerbaijan propaganda campaigns in Russia are another concern; some individuals have openly discussed the possibility of “a tactical nuclear missile attack” against Baku. Moreover, it is important to highlight that the neutrality of the Azerbaijani government has not protected its citizens from abuse in Ukraine. The news service Voice of America has reported the case of at least one Azerbaijani citizen, a student from Mariupol State University, who was held and tortured by Russian forces from 17 March to 12 April after he was kidnapped. While the young man was ultimately freed, the incident is nevertheless worrisome and can be added to anti-Azerbaijani sentiments in Russia.

Baku’s strategic silence and lack of criticism is, thus, a way for the Azerbaijani government to not anger Moscow, particularly since Russia could easily start supporting Armenia in the territorial dispute between the two countries; or the Kremlin could find an excuse for some operation in Azerbaijan, following the Ukrainian invasion model.

At the same time, Azerbaijan wants to demonstrate its intention to remain a friend of Europe. Thus, given the sanctions against Russia, the idea of a Caucasus corridor to transport energy from Central Asia to Southeastern Europe, and from there to the rest of the region, is a widely discussed topic today. Case in point, the Kazakhstani embassy in Washington DC hosted on 18 April a conference, organized by the International Tax and Investment Center and the New Lines Institute; among the speakers was Timur Suleimenov, first deputy chief of staff of Kazakhstan’s president. Mr. Suleimenov noted that his government and Baku were in discussions to develop a new fleet of tanker ships to increase the volume of energy transported across the Caspian Sea, from Kazakhstan’s Aktau to Baku port. Azerbaijan itself also wants to increase its energy production, including renewable energy, to become a greater supplier to Europe. As Nikola Mikovic argued in a commentary for The Interpreter, “Baku potentially stands to benefit from the trouble [meaning the war], specifically in relation to its gas exports to Europe.”

Similarly, Baku has striven to demonstrate to Washington that it values bilateral relations. Since the war started, US Secretary Antony Blinken and President Ilham Aliyev have held several phone calls. Moreover, via the State Partnership Program, the Oklahoma National Guard and Azerbaijani troops held military exercises from 28 March to 1 April. The exercises included the exchange of medical knowledge between the Oklahoma Army and Air National Guard and doctors assigned to Azerbaijan’s Operational Capabilities Concept Battalion.

The government of Azerbaijan has to walk a fine line in order not appear either too pro-Moscow or pro-Kyiv, given the potential negative consequences of either decision. The territorial dispute with Armenia, the legacy of the 2020 conflict, and the deployment of Russian peacekeepers to the border between the two countries are all factors that Baku must keep in mind as the Russian invasion of Ukraine continues.

On the other hand, Baku aims to demonstrate that it can be a reliable partner for both Europe and the United States, both as part of an energy and goods corridor between Southeastern Europe and Central Asia, as well as in other areas. The donation of humanitarian aid, like medicines and even oil for ambulances, for Ukraine and Moldova (to help Ukrainian refugees), while not as significant as weapons transfers, are all important developments that should not be overlooked by Brussels, London, and Washington.