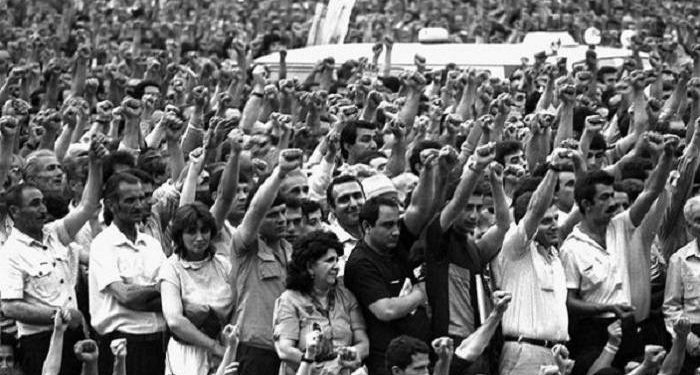 There are two views of the Nagorno-Karabakh conflict:

The first view is a narrative supported by the Armenian community and many Western scholars. According to it, the cause of the conflict was the desire of the Nagorno-Karabakh Autonomous Oblast to unite with the Armenian SSR, but the Azerbaijani SSR and the Supreme Soviet of the USSR did not allow it. According to the proponents of this narrative, the Armenian pogroms, which began in Sumgayit, added an ethnic aspect to this conflict.

However, even at first glance, the transition of the issue into an ethnic framework was already evident in the preparation for the referendum of February 12, 1988. When asked about the fate of the Azerbaijani population in the region, one of the leaders of the Karabakh Committee Igor Muradyan said, “Do you want to know the truth? I will tell you the truth. We weren’t interested in the fate of those people. Those people were the instruments of power, instruments of violence over us for many decades, many centuries even. We weren’t interested in their fate and we’re not interested now.” (De Waal, 2008:31).

The second view is a more realistic and fair view of the issue. Although the Supreme Soviet of NKAO made the request to be incorporated in the Armenian SSR in February 1988, ethnic cleansing had already begun by then. The violence against and expulsion of about 4,000 Azerbaijanis from ` (Kapan) in November 1987 shows that the conflict had turned into an ethnic war. Soviet writer Alexander Prokhanov also witnessed those events with his own eyes.

Soviet leader Mikhail Gorbachev also saw that the Karabakh conflict had become ethnic. During a meeting with the leaders of the Karabakh movement Silva Kaputikyan and Zori Balayan in Moscow, he asked them, “Have you thought about how this will affect the fate of 207,000 Armenians living in Baku?” Kaputikyan answered, “Why should there be a need to think about the fate of 207,000 Armenians living in Baku?” (Alekseyev, 2010:333).

In reality, Kaputikyan knew that this conflict was a move that would endanger the lives of the Armenians living in Azerbaijan. But the fate of the community of 200,000 was more important to them than that of 500,000. It was just like sacrificing all Armenians living in Anatolia in the early 20th century in order to establish a state in Eastern Anatolia.

Thomas de Waal writes about the Azerbaijanis expelled from Armenia in 1987-1988: “The trouble died down in Baku, and timely action by the city authorities may have averted at least two other attempts at pogroms there later that year. Yet, arguably, [Baku’s local Party boss] Musayev had only moved the trouble on to the town of Sumgait, twenty miles away. As one of his precautionary measures, he restricted the access of the thousands of workers who traveled from Sumgait to work in Baku every day, and he sent the Azerbaijani refugees from Armenia on to two villages, Fatmai and Sarai, on the edge of Sumgait.” (De Waal, 2008:43)

Thus, at the instigation of nationalist youth, a pogrom against Armenians began in Sumgayit. We can mention the impact of the events in Sumgayit on the killing of two Azerbaijanis in the clashes with refugees from Qafan and in the clashes in Askeran. There is no point in talking at length about the Sumgayit pogrom. As a result of those events, 26 Armenians and 6 Azerbaijanis were killed. The fact that one of the 84 accused was Armenian (Eduard Grigoryan) does not change the fact that this pogrom was committed by Azerbaijanis. It is an example of cheap propaganda of modern Azerbaijani historiography to say that one Armenian organized a massacre in the Armenian neighborhoods and Azerbaijani youth followed him. Still, it may be a piece of propaganda, but it is safe to say that these events played into the hands of the Armenians of Nagorno-Karabakh. After it happened, violence against the Azerbaijanis living in Armenia began to snowball. These events also led to the Supreme Soviet of the Nagorno-Karabakh Autonomous Oblast disregarding the advice of the Supreme Soviet of the USSR to prevent the secession from the Azerbaijani SSR and to the deepening of the social crisis. In this situation, the threat to the Azerbaijanis of Armenia and the majority of the Armenians living in Baku began to grow.

Many books and articles have been written about the differences between the Armenians of Baku and the Armenians of Armenia and Nagorno-Karabakh. More on that later, but first let’s hear it from an Armenian woman from Baku: “I am a Baku Armenian. There is a difference between Baku Armenians and Armenian Armenians, and it’s a big one. Since we lived in Baku, a city of 80 ethnicities, we didn’t see people’s ethnicities. Our worldview was completely different. After the forced emigration to Armenia, I saw that people in this country were divided by ethnicity. Even though I am Armenian, they treated me as a Russian, because I didn’t know the Armenian language and traditions. This is why we had problems we had there.” (Popkov, 2003:147).

Saleh Aliyev, an Azerbaijani (Soviet) orientalist, explains the difference between Baku Armenians and Karabakh Armenians in 1988-1990: “The Armenians of Baku, most of whom were part of the city’s Russian-speaking community, hardly supported nationalist and anti-Azerbaijani protests and slogans. Karabakh Armenians envied Baku Armenians for their intellect.” (Aliyev, 2009:29). The Baku Armenians, on the other hand, looked down at the Karabakh Armenians. This was a clear example of the cultural conflict between the two communities. Such differences are acknowledged not only by Russian scholars, but also by Armenian historians. In his book, Sergei Chobanyan writes about the Baku Armenians who emigrated from Azerbaijan: “Baku Armenians could not get used to the new environment in which their new neighbors called them “fake Armenians” and sometimes even refused to see them as Armenians altogether. Besides, the Armenians of Baku, most of whom were intelligentsia, did not want to move to villages that would mean completely different living conditions and could strip them off their social status. Among them were many people of professions that were irrelevant in Armenia (e.g., oil industry workers). Because of this and because of the tense socio-economic situation in Armenia, the vast majority of Baku refugees were forced to emigrate from Armenia. Most of them went to Russia, Ukraine and some to the United States. Another peculiarity of the Baku Armenians was that they remained Russified because they had lived in the Baku environment and became part of the ethnic Baku community. For this reason, they were not interested in the Karabakh issue at all and didn’t support when was being done there.” (Chobanyan, 1993:94).

The Armenians of Baku were so different because they were part of the “Bakintsy” (“Bakuvians”), a nation of sorts formed by Azerbaijanis, Jews, Russians and other ethnicities living in the city. Just as the Azerbaijanis with this mindset differ from Azerbaijanis living in other parts of the country, so did the Armenians of Baku differ from Armenians of Karabakh and Armenia. Most of the Baku Armenians now live in Russia (mainly in Krasnodar and Stavropol). During the Second Karabakh War, which began on September 27 and ended with Azerbaijan’s victory, Baku Armenians were the only Armenian community that sent a collective letter to the Catholicos of All Armenians Garegin II and called on Armenia to end the occupation of Azerbaijani lands.

Of course, there are Baku Armenians among them who took the pogroms in Baku in the late 1980s personally and used it as part of the propaganda of the Armenian diaspora. (Like Harry Kasparov and Emil Sanamyan). At any rate, these are exceptions to the rule and do not represent the views of the absolute majority of the community. The fact that they are members of an intellectual community does not allow them to have a revanchist nationalist psychology like that of the Armenians of Nagorno-Karabakh and Armenia. The cultural heritage of Baku Armenians is still alive in our capital today. Gavriil Ter-Mikelov, the architect of the Azerbaijan State Academic Philharmonic, Vartan Sarkisov, the architect of Lev Landau’s house, Nikolai Bayev, the architect of the Opera and Ballet Theater and the former Baku Railway Station building were Baku Armenians. Vartan Sarkisov was also involved in the restoration of the Ismailiyya building, which suffered damage from fire in 1918. The buildings built by Baku Armenian millionaires (the House with Angels commissioned by Armenian millionaire Sergei Tumayev, the current Azneft building owned by Michael Aramyan, the current Iranian embassy that used to be David Yuzbashyan’s home, etc.) are some of the most remarkable sights in the city. According to official statistics for 1999, 104 Armenians lived in Baku. According to the official and unofficial propaganda carried out in Azerbaijan after the Karabakh war, the majority of Azerbaijanis do not believe in coexistence with Armenians. However, this figure actually shows that we can in fact peacefully coexist with Armenians. To achieve this, both sides should make an effort to carry out appropriate propaganda work and to prevent actions that will serve revanchist sentiments. A typical example of this is the Baku Armenians.