Biden can help Armenia and Azerbaijan make peace. Here’s how.

Four steps Washington can take to facilitate a lasting end to the conflict. 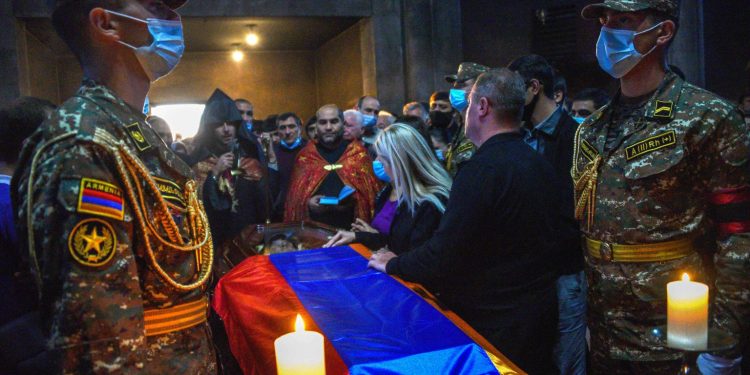 People attend a funeral service for an Armenian soldier killed in clashes between Armenia and Azerbaijan over Nagorno-Karabakh, at a church in Yerevan on Oct. 9, 2020. KAREN MINASYAN/AFP VIA GETTY IMAGES

The first 100 days are not even over, and the Biden administration’s national security and foreign-policy team has already dealt with major fires around the world—from the Saudi-backed war in Yemen to a military coup and brutal crackdown in Myanmar to calibrating the relationship with a bristling China.

Late last year, a war broke out between Armenia and Azerbaijan, and although the bullets and bombs have stopped for now, the underlying conflict has not ended. It is an example of the kind of problem that slips out of the headlines and, therefore, away from the firefighters’ view. That’s too bad—not only because the smoldering embers could ignite further violence and human misery but also because firefighting is about preventing destruction, not about construction. If all one does is put out fires, one never builds anything. In other words, moments of relative calm, however tense and enduring the challenges might be, often present the opportunities—however difficult—for actual progress.

Though its roots go back further (they always do), in its contemporary incarnation the conflict between Armenia and Azerbaijan erupted three decades ago, as ripples of the Soviet Union’s slow-motion collapse began radiating outward from its epicenter in Moscow.

Until a new wide-scale war broke out in September 2020, the conflict over the status of the majority-Armenian region of Nagorno-Karabakh and adjacent territories had been mostly frozen since 1994, when a Russian-brokered cease-fire ended several years of war that killed thousands of people and displaced more than a million in the two former Soviet republics. Since 1997, the United States, Russia, and France, as co-chairs of the Minsk Group at the Organization for Security and Cooperation in Europe (OSCE), have been charged with facilitating negotiations toward a lasting resolution.

But in recent years, diplomacy faltered, and outbreaks of violence along the line of contact became more frequent, including a four-day conflagration in 2016. The 1994 agreement left Armenia in de facto control not only of Nagorno-Karabakh, a majority-Armenian region that had been part of Azerbaijan in the Soviet Union, but also of adjacent Azerbaijani territories—and it was signed in part because of Azerbaijan’s fear at the time that Armenian troops might make further gains, including attacking Azerbaijan’s second-largest city, Ganja. But in the intervening decades, Azerbaijan’s oil money combined with military, intelligence, and training support from Turkey—and Armenia’s relative poverty and dependence on Russia—created a situation where the party dissatisfied with the status quo, Azerbaijan, had accumulated significant advantages in military power. This loaded the spring for renewed conflict, and the failure of the parties to negotiate effectively—and of the international community to pressure and incentivize them to do so—released the spring in the new war that broke out last year.

This time, roles were reversed as Azerbaijan reclaimed territory adjoining Nagorno-Karabakh and wrested control of a significant portion of Nagorno-Karabakh itself before the parties signed another Russian-brokered cease-fire late in the night of Nov. 9, 2020. Notably, that agreement provides for 2,000 Russian peacekeepers to be deployed along a new line of contact and in the corridor connecting Nagorno-Karabakh to Armenia proper—a step that worries many who have witnessed how in Georgia and Moldova, two other former Soviet republics, Russian so-called peacekeepers have undermined sovereignty rather than reinforced it.

The new status quo is unlikely to change in the near term, nor do the two parties seem willing to move forward constructively. And the Nov. 9 agreement is only a cease-fire, not a peace accord. Furthermore, the deep involvement of and ambiguous objectives of Russia and Turkey make things even more complicated, and the situation on the ground is already a morass of sensitive transit routes and mountainous terrain. Looking at maps of the conflict area can actually be confusing rather than clarifying.

Today Azerbaijan, though drunk with victory, remains a brittle and repressive petrostate held back by official corruption and economic stagnation. Armenia’s democratic reforms, a source of hope after the 2018 political transition, are—like its prime minister, Nikol Pashinyan—on the ropes, as weak institutions and a disheartened populace prove vulnerable to Russian disinformation, corruption, and anti-Western narratives. Though an improvement over his predecessors, Pashinyan has proved an unsteady steward of Armenia’s democratic transformation. This month, he called for snap elections in a bid to escape the political crisis precipitated by anger over Armenia’s defeat. Either way, Armenia is likely to remain painfully dependent on Moscow. And leaders in both Baku and Yerevan have prepared their populations for war for more than a generation and have done little to lay the groundwork for peace. Against this backdrop, senior officials in the Biden administration might well argue internally that they should keep an eye on the situation but focus their energies elsewhere—and not attempt to play a leading role diplomatically.

This would be a mistake. Instead, the new U.S. administration should see the South Caucasus region as an opportunity to demonstrate the value of serious U.S. engagement and use it as an example of President Joe Biden’s commitment to a pro-democracy foreign policy centered on universal values and human rights. This is not to suggest that a dramatic breakthrough is obviously in reach; there is plenty of reason for sober analysis and skepticism about outcomes. But without energetic U.S. diplomacy, there is significantly less hope for progress.

Here are four steps the Biden administration can take to encourage Armenia and Azerbaijan toward a lasting peace. It will be a long road, but these steps would set a constructive course.

First, press for implementation of the cease-fire, addressing issues of accountability and remediation. The Nov. 9 agreement between the two parties, co-signed by Russian President Vladimir Putin, is not ideal. But for now, there is no near-term alternative framework for sustaining the cease-fire. That agreement demands the exchange of all prisoners, military and civilian, taken by both sides. Credible reporting suggests that prisoners remain, and their return should be a priority. Washington should also support reporting by the OSCE team on the ground—hopefully augmented from its current size of just a handful of people—on complaints about cease-fire violations, human rights abuses, and alleged war crimes. Accountability requires a factual record, and recording victims’ complaints is a first step. The OSCE can also advise on possible approaches for compensation for displaced persons.

Second, support humanitarian work and resettlement activities. Too often, when the guns go silent, attention shifts elsewhere. People on the ground are left to sort out how to restart their lives with property and businesses destroyed, landmines strewn in unknown numbers in indeterminate places, infrastructure and transportation routes disrupted, and families displaced or returning. The practical work of supporting ordinary people as they adapt to a new political geography is less sexy than the negotiation of military cease-fires or political agreements, but it is the foundation for peace: The conflict cannot be settled until people are. Resettlement in territories newly controlled by Azerbaijan will not be easy—and the corrupt government in Baku does not have a track record of responsible management of local governance challenges. Meanwhile, Armenians newly displaced are worried about the fate of Armenian religious and cultural sites now under Azerbaijani control. Neither Russia nor Turkey can be relied on to shepherd this work.

The most plausible lever to drive cooperation is a new regional economic strategy, including infrastructure development.

The international community can lend both expertise and credibility to addressing concerns on both sides. New grievances should not be allowed to smolder in the quiet after conflict. The United States should work with Europeans and others to support NGOs and international organizations that can carry out local confidence-building measures.

Third, drive a regionwide economic development strategy. The most plausible lever to drive future cross-border cooperation is a new regional economic strategy, including infrastructure development, that can attract international investment to strengthen the economies of Armenia, Azerbaijan, and neighboring Georgia (which is going through its own self-inflicted political crisis). U.S. Treasury Secretary Janet Yellen should, formally or informally, put the region on the agenda for high-level talks at the annual meetings of the International Monetary Fund and World Bank beginning next week. And Washington should work with the European Union and the three governments in the South Caucasus to develop such a framework for regional development. The C5+1 framework, developed by the Obama administration (and continued by the Trump administration) to foster cooperation on regional issues in Central Asia, could be a model for a new SC3+2 framework, involving the three South Caucasus countries, the United States, and the EU.

Financial investments from the international community should be pinned to political commitments from the parties and to their progress on resolving contentious issues that impede regional economic development, such as border crossings and utilities infrastructure. Moreover, any financial assistance should be paired with measures to tackle endemic corruption.

Fourth, reinvigorate diplomacy. The U.S. co-chair of the Minsk Group should have ambassadorial rank. Washington should energetically push the co-chairs to meet regularly along with the OSCE team on the ground to chart and implement a strategy for addressing the irritants that rarely make headlines but hamper day-to-day progress. In addition, Washington should begin talks with Moscow about a United Nations Security Council resolution to ratify the Nov. 9 cease-fire and call for a full peace agreement.

The Russians should welcome Security Council ratification of Putin’s hastily drawn-up one-page agreement. In exchange, such a resolution should also give an international imprimatur to a regional development plan that would include all three South Caucasus countries. It could reaffirm the parties’ sovereignty, including their right to end the Russian peacekeeper deployment after five years.

But it is never the full picture, either. As Eleanor Roosevelt observed, human rights begin in the “small places close to home.” A foreign policy centered on human rights, therefore, cannot focus only on geopolitics and the biggest players. And when the geopolitical contest is not just a contest of power but of ideologies and worldview, even small places can become big tests. The conflict between Armenia and Azerbaijan is seen by many as intractable. An earnest U.S. effort to push for progress is an opportunity to demonstrate what a values-driven foreign policy looks like. 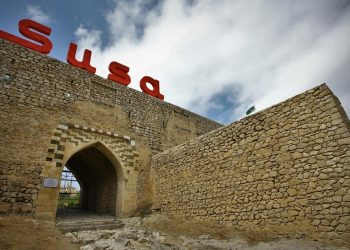