Deportation of Azerbaijanis from the Armenian SSR in 1988. Part I. The beginning 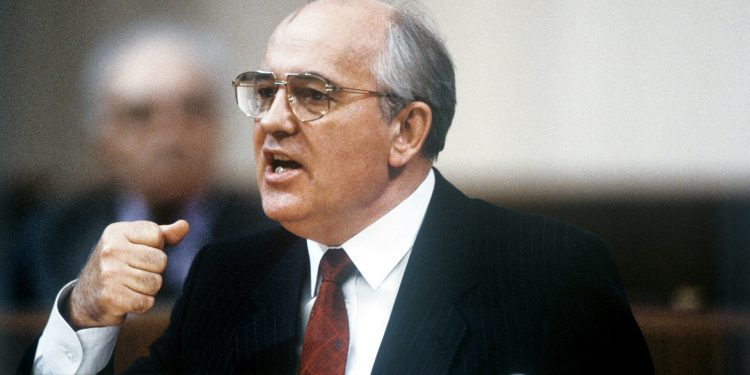 Contemplating the prospects of changes in the USSR in 1985, the architects of the reforms had no idea how important the national issue would be in the history of perestroika.

In many ways, Mikhail Gorbachev’s policy gave impetus to ethno-national processes, the direction of which was programmed by earlier contradictions. These contradictions were of historical nature and stemmed from ethnic, as well as social and political factors.

The 1986 December events in Almaty were a harbinger of the oncoming storm. They can be considered Gorbachev’s first provocation in the arena of “national and ethnic conflicts.” Moscow condemned the Kazakhs at the time for a “tendency towards national isolation, the sentiment of national arrogance” and for “displays of nationalism.”

Later, similar accusations would be addressed to the Azerbaijanis. Following the events in Kazakhstan, the Center for the Study of Interethnic Issues and Interethnic Relations was established at the Institute of Ethnography of the USSR Academy of Sciences. In the fall of 1987, the Center prepared a special memo on the national issue for the Central Committee of the CPSU, listing 19 “hot spots” in the country. One of them was the Nagorno-Karabakh Autonomous Oblast.

The formation of a territorial autonomy for the Armenian population of Nagorno-Karabakh within the Azerbaijan SSR in 1923, despite the existence of a separate Armenian republic, invariably retained the threat of separatism and a potential for conflict in the relations between the two peoples. The existence of two ethnically identical Armenian national formations within one state, i.e., Soviet Union, and in such a close proximity to boot, was akin to a time bomb that had to explode.

Several most acute phases can be distinguished in the development of the conflict around the NKAO in the post-Stalinist period. The first phase began in the period of the “Khrushchev Thaw” and was associated with the resolutions of the 20th Congress of the CPSU Central Committee to eliminate the grave consequences of Stalin’s personality cult, which put the idea of territorial claims to neighboring South Caucasian republics and Turkey on the Armenian agenda.

The second phase of aggravation of the situation is related to the 1965 celebration in Armenia of the anniversary of the so-called “Armenian genocide”, which allegedly took place during the First World War in the territory of the Ottoman Empire. Starting from 1965 when the Soviet authorities sanctioned the official cultivation of anti-Turkish (and anti-Azerbaijani) sentiments in the Armenian SSR and the events organized by the Communist leadership were held “to commemorate the victims of genocide”, the seeds of hatred towards Azerbaijanis fell on the already fertilized soil.

From then on, the process of the moral and psychological expulsion of the Azerbaijanis who lived on their historical lands within Soviet Armenia became increasingly intense.

Until the 80s, not counting individual isolated cases of surging tension, mainly initiated from Armenia and manifested in the collection of signatures and appeals of the Armenian intelligentsia to the Soviet Union leadership, as well as clashes in everyday life between Armenians and Azerbaijanis in Nagorno-Karabakh, the Soviet authorities managed to keep abreast of the situation and not to let the information about these incidents leave the borders of the autonomy or appear in the Soviet press.

During the final phase of the conflict, which began in the second half of the 1980s, the Armenian-Azerbaijani territorial conflict made its break on the pages of the union and republican press for the first time, thereby escaping its latent state and becoming the subject of public discussion.

For the first time since the 1920s, a demand was put forward—not in closed offices or at dinner tables, but openly, at the official level—to change the administrative-territorial setup of the Soviet state, that is, one of the key messages on which the “unbreakable union” was founded.

Moreover, the Kremlin leaders were well informed about the sentiments in Armenia and Nagorno-Karabakh, they knew well what was happening there and what was brewing, because they did not particularly hide their intentions and plans, carefully incorporating radical separatist demands into the democratic rhetoric of perestroika.

This is evidenced by the thoughts expressed by M. Gorbachev in his memoirs. Gorbachev writes, “For three years (the period from 1985 to 1987—I.N.), the Central Committee received 500 letters about the situation in Nagorno-Karabakh. Perestroika set in motion great internal forces, old abscesses began to open. National feelings are resurging, and so is national extremism.”

F.D. Bobkov, who held the post of First Deputy Chairman of the KGB in those years, wrote about the imminent conflict: “For two years now we have sounded the alarm about the impending conflict between Armenia and Azerbaijan… A brigade was sent to Armenia, which confirmed that ethnic conflicts were festering in Transcaucasia and urgent action must be taken. The issue was brought up for discussion at the Secretariat of the Central Committee of the CPSU. However, all the conclusions and proposals of the team were removed from the resolutions and sharp edges of the issue were smoothed over. Nobody wanted to openly admit the existence of ethnic conflicts, to acknowledge that social upheavals were brewing in some republics… The Central Committee of the CPSU thwarted any attempts to disclose the truth.”

Thus, Moscow believed that the next Armenian fuss over the idea of annexing Nagorno-Karabakh to Armenia would be drowned out by traditional methods of preventive influence of local party and law enforcement agencies. The party leadership of the Azerbaijan SSR was also aware of the events that took place around Nagorno-Karabakh, and regularly informed Moscow long before the start of the final bloody phase of the conflict.

This is how Colonel G. Septa, the former chairman of the regional branch of the NKAO KGB, recalls it: “The flare-ups of nationalist manifestations were regularly reported to the leadership, up the line. The arrivals of emissaries from Yerevan, the stir in the groups that were in the field of view of the service were also recorded. It was reported, written to the authorities, the emerging problems with Kevorkov were repeatedly discussed (First Secretary of the Regional Committee of the NKAO CP in 1973-1988—I.N.). Moscow turned a blind eye to all this, saying, what’s the big deal, the situation over here is much worse. The Baku leadership never showed due concern: be it in the case of the targeted distribution of Z. Balayan’s Hearth, the book that actually became a call for “Miatsum” (annexation of the region to Armenia), or later, when the separatists cleverly hid behind the slogans of greater democracy and glasnost. By February, everything was clear. Even if Sumgayit had not happened, it would have broken out somewhere else.”

Meanwhile, an event took place in late 1987 that truly inspired the Armenian nationalists and gave their actions confidence: on October 21, 1987, Deputy Chairman of the Council of Ministers of the USSR Heydar Aliyev was removed from the Politburo of the Central Committee of the CPSU.

According to the memoirs of the Assistant Secretary General I. Boldin, when Aliyev was retired, Gorbachev spoke warmly about him and his work at the Plenum of the Central Committee, but when the transcript was published, he took that part out.

As the author of Black Garden Thomas de Waal established, the Armenian nationalists had the most direct involvement in Heydar Aliyev’s resignation. He writes, “The Karabakh activists even received the tacit support of the local Armenian Party leader, Karen Demirchian, for one of their schemes: a campaign to discredit the senior Azerbaijani politician, Heidar Aliev, whom they had identified as the man most likely to obstruct their campaign… Armenian Party boss Demirchian was reportedly delighted at the political demise of his rival. Muradian says that in 1990 he got a message from Demirchian, through a mutual friend: “The main thing we did was to remove Aliev before the beginning of the [Karabakh] movement. That was very important.”

Still, we cannot say unequivocally that the removal of Aliyev was the crucial factor that gave impetus to the new Armenian movement for Nagorno-Karabakh, all the more so that similar actions on their part had been witnessed earlier.

The lack of explicit reaction of the highest agencies of the CPSU and the Soviet state to the signals received through various channels in itself provoked the Armenian side to more persistent, energetic advancement of territorial claims.

According to some reports, 75,000 signatures were collected in Nagorno-Karabakh during 1987 under a petition on the transfer of the autonomous region to Armenia. Influential Armenians actively lobbied the Karabakh issue abroad. Historian Sergei Mikoyan, the son of the old party functionary Anastas Mikoyan, writer and journalist Zori Balayan, in their interviews with the newspapers of the Armenian diaspora in the United States, openly promoted the idea of annexing Nagorno-Karabakh. And Abel Aganbegyan, one of Gorbachev’s leading economic advisers, also voiced his opinion on the matter in November 1987.

Aganbegyan’s views were presented in the newspaper of the French Communists L’Humanité, which was also distributed in the Soviet Union. It was from these revelations of the academic that the Azerbaijanis first learned about the Armenian campaign against them. Gorbachev neither directly nor indirectly refuted his adviser’s opinion. Consequently, the Armenians decided that such a bold statement of the economic adviser to the Secretary General of the Party himself was not accidental and most likely had been approved by the latter in advance.

Aganbegyan’s statement instantly became the central topic for foreign Armenian newspapers and magazines, for AYP radio station in Paris, as well as for the Armenian editorial offices of Radio Liberty, Voice of America and others. Many organizations of the Armenian diaspora abroad came alive with activity. Thus, the marked Karabakh card came into play.

The demand for the annexation of the NKAO to Armenia was ideologically based, firstly, on the mythical Armenian ancestry of Karabakh, and, secondly, on the nation’s right to self-determination, one-sidedly inflated and take out of the context of the system of constitutional principles of the Soviet state, which also included respect for the territorial integrity of the republics.

In general, the entire propagandistic rhetoric of the separatist movement was diligently built into the contexts of the ideological processes of perestroika. Namely, a critical revision of the history of the USSR was used to spread far-fetched claims that Stalin allegedly “had given” Karabakh to Azerbaijan in 1921. The ideas of dismantling the command and administration system in the USSR, which were being actively discussed in society, were extended to the national state structure of the Soviet Union and used to justify the revision of the territorial and legal status of the NKAO.

The Armenian propaganda was supported by active political and organizational work. Under the guidance of emissaries from Armenia, the organizational foundations of the separatist movement were being created, which were later legalized in the NKAO under the names “Krunk” and “Karabakh”.

The year was 1988, which would become a turning point in the history of Mikhail Gorbachev’s perestroika. The country was on the threshold of the bloodiest, after the Great Patriotic War, ordeals. The only difference was that now the war was going on inside the country, between its citizens. The events that began in Nagorno-Karabakh not only aggravated the situation in the field of interethnic relations, but also marked the beginning of the decline of Gorbachev’s perestroika policy, and with it, the decline of the Soviet Union as a whole.