France: a natural mediator of rapprochement between Armenia and Azerbaijan

Armenia’s recent general election saw Prime Minister Nikolai Pashinyan return to office with a substantially increased majority. Instinctively a moderate and pragmatic voice, Pashinyan has in the past found himself having to make concessions to his own ‘ultras’ whose only vision for their nation is one of isolation and eternal grievance against Turkey. 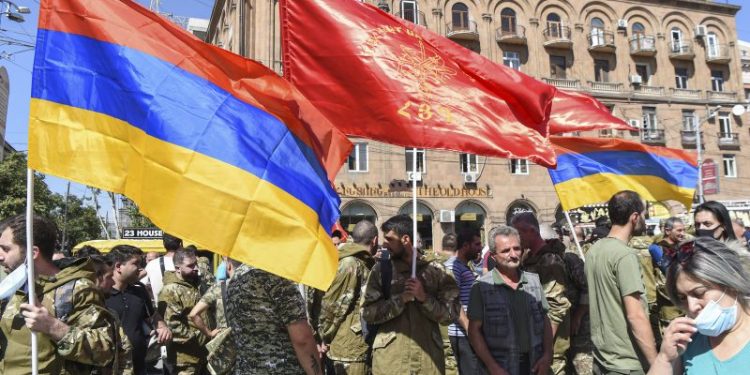 It is France's duty to play the role of mediator between Armenia and Azerbaijan, argues Jérôme Lambert. [Malik Baghdasaryan/EPA/EFE]

Armenia now stands at a crossroads. Will it continue to pursue its self-harming historic agenda of regional isolation, or will it embrace the path of peace and reconciliation?

On this question, France has an important duty to discharge. For nearly three decades France has held one of three co-chairs in the OSCE’s Minsk Group, alongside Russia and the USA, charged with enabling a peaceful resolution to Armenia’s military occupation of Karabakh, a substantial area of Azerbaijan. The diplomatic failure of that group was a factor in last year’s war between the two neighbours, which ended with the restoration of Azerbaijani sovereignty. But a lasting peace is still not settled, and France now has an opportunity to act.

At stake is not only the future of the Southern Caucasus, but also of France’s international reputation as an ‘honest broker’. In recent years and months, the pressure from an effective Armenian diaspora lobby, well organised in France, could well have weakened my nation’s capacity to play the part of an impartial mediator. Meanwhile the USA has pursued a neutral and balanced agenda – one month officially recognising the Armenian Genocide, the next month helping persuade Armenia to hand over maps of the huge areas of land mines which are the tragic legacy of its Karabakh occupation.

France must now seek to re-balance its own approach to the region. In doing so it has one key advantage: its unwavering support for Armenia has given it a certain leverage in Yerevan, and it is this leverage which France must now use. The French people have a long and bitter experience of conflict with neighbours, but they also know that economic co-operation and shared prosperity can overcome even the most traumatic episodes of history. Encouraging and supporting cross-border economic co-operation should now become a priority for France’s Southern Caucasus policy.

For the moment, Armenia’s economy remains crippled. Three of its four international borders are closed to trade – with Turkey, Azerbaijan, and even its fellow-Christian nation Georgia. Only the fourth – with Iran – is open. To the north, Armenia remains hugely reliant on a Russia whose interests are best served by keeping Armenia vulnerable and dependent. The time has come to normalise the Southern Caucasus, re-open borders and re-establish vital transport connections.

Besides the important question of France’s diplomatic reputation, direct French economic interests are at stake. The Southern Caucasus, for so long held back by the Karabakh problem, can now move forward. The opportunity for investment in the region – not least in the devastated territory of Karabakh itself – is enormous, with Azerbaijan’s powerful economy underwriting the re-establishment of vital infrastructure to allow the return of 1 million internal refugees to their homelands. Mining, agriculture, green energy, transport, tourism: these are only a few of the many sectors currently welcoming international investment. France can at once restore its credibility as an independent mediator, help secure the economic foundations of lasting peace, and further the business interests of French companies in the region.

So far, Armenia has sent negative or, at best, ambiguous signals to its neighbours. It is in France’s interests to encourage Armenia to turn away from isolation. The key to unlocking the region’s potential lies in Yerevan, and Yerevan listens to Paris. Using its political, diplomatic and business channels, it is time for Paris to make its voice heard.

Jérôme Lambert is a member of the French National Assembly and of the Parliamentary Assemblies of both the Council of Europe and NATO.