The Armenian segment of social networks, having recently embraced Ostap Bender's "the world abroad will help us" quote, has now found solace. It came with the news that in the near future India-made Pinaka MLRSs will be delivered to Armenia, still licking wounds after the recent battles on the conditional border. 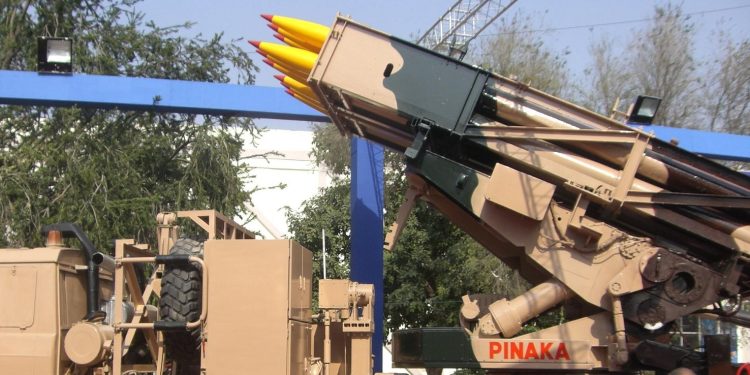 The contract is said to be worth about $250 million. According to sources, six launchers, six loaders, three replenishment vehicles, two command posts, and one weather radar are worth $54 million.

According to the Indian media, the relevant contracts, which also include deliveries of Indian-made anti-tank missiles and other ammunition to Armenia, were concluded in early September. This is India’s first-ever sale of Pinaka MLRSs abroad, but it is not the first time that Indian arms have been supplied to Armenia. Back in 2020, India sent four Swathi counter-battery radars to Armenians at a total cost of $40 million.

Depending on the type of missile, the Pinaka can demonstrate a range of 37.5 to 60 km against targets, but missiles up to 90 and 120 km are also in development. A single launcher can carry 12 rockets that can be launched in 44 seconds. Like most similar systems, the Pinaka can be remotely controlled.

This is, in fact, all that can be said about the MLRS data, which is a cheap Indian copy of the Soviet technologies of the 1980s and are not even up to modern Chinese models.

TASS reported citing Indian sources that India’s overseas arms shipments have increased more than sevenfold since the Modi government came to power in 2014. According to the country’s defence ministry, defence exports have increased from $255.6 million in fiscal 2014-2015 to $1.528 billion in 2021-2022. By 2025, New Delhi plans to raise its annual arms exports to $5 billion.

These figures alone do not worry the Azerbaijani expert community and the public. After all, India, as an independent state with a claim to great power, decides for itself to whom it sells scrap produced by its military industry. And these figures should be considered only within the framework of India’s growing involvement in world politics in general, which began to reveal itself most clearly after Prime Minister Modi came to power.

However, India cannot expect the same level of equanimity from the Azerbaijani public when it comes to arms sales to Armenia. After all, it is obvious that Azerbaijan is not a threat to India and cannot be. As for the military cooperation between Baku and Islamabad, you have to be either an ideologically very biased analyst or a lumpen from the suburbs of Mumbai to speak of a threat to India. For the latter could be true, and only in part, if Azerbaijan were to supply arms to Pakistan or China, for example, or train Pakistani or Chinese special forces, send military advisers to these countries, etc. There are no signs of it so far.

Now let’s speak about Armenia. We have already noted above that Pinaka MLRSs are a cheap Indian copy of Soviet technology from the 1980s. However, we do not share the joy of some Azerbaijani experts and social media users over the fact that the deviation from the set impact point in the case of these systems can be up to 4 per cent, which is quite a lot for modern missile and artillery systems. Because, as the experience of the 44-day war has shown, Armenian rocket gunners are specialists in shooting at densely populated cities such as Ganja or Barda, rather than at parts and objects of military infrastructure. In such cases, deviation from the target point does not make much difference.

Since November 2020, the Armenian leadership, contrary to its commitments, has continued to do everything possible to postpone the conclusion of a final peace agreement. Moreover, provocations of various kinds have continued unabated. For example, from blatant acts of terrorism, such as the Armenian subversive group in the Khojavand region that was neutralized immediately after the war, to the throwing of a grenade in front of Russian peacekeepers at the checkpoint at the entrance to Shusha, and from the shelling of posts and positions of the Azerbaijani Army to the mining. Not to mention the environmental terror committed by the Armenians leaving Kalbajar and Lachin.

The behaviour of the Armenian side in the meetings and negotiations which have taken place over these incomplete two years at various levels and in various formats also speaks for itself – it is stalling for time. Moreover, the very content of intra-Armenian political discourse also indicates that Yerevan is not going to conclude a peace agreement in the hope of a random chance. “If a war starts here involving any one regional power, other countries will get involved. The war here will be much bloodier than in Ukraine… In any case, Armenia should not sign any document, as Azerbaijan did for 30 years. Armenia needs to wait just a few months,” Armenian political analyst Stepan Danielyan said recently.

Danielyan is not the only one who thinks so. Especially after US House of Representatives Speaker Nancy Pelosi’s recent visit to Armenia. A visit that gave the Armenian revanchists that very hope, against the backdrop of a sharp aggravation of the situation in the Aegean Sea on the one hand, and a further weakening of Russia in the South Caucasus on the other.

In addition, Armenia continues to arm itself. Thus, according to the Armenian media, which got access to a document provided to members of the Armenian government by Minister of Finance Tigran Khachatryan, Yerevan will dramatically increase spending on defence infrastructure in 2023. Spending will immediately increase by about 56 per cent, and will make about $1 billion 326 million. The ratio of these expenditures to GDP will reach 5.9 per cent, compared to 4.5 per cent planned for this year.

The Armenian Defence Ministry’s deal with India, however, shows that the increase in infrastructure spending is not limited to that. Multiple rocket launchers are also offensive weapons. Many of us remember how the Armenian armed forces used SCAD operational-tactical missile systems, Tochka-U tactical missile systems, and Smerch multiple-launch rocket systems during the 44-day war in 2020. Azerbaijani Armed Forces losses from enemy rocket artillery were minimal. But in Ganja and Barda, as well as in civilian villages of Tartar and Goranboy regions, Armenians were working intensively. This led to civilian casualties, the total number of which only in Ganja and Barda exceeded 50 people, not counting more than two hundred wounded.

The 44-day war took place in a context where Azerbaijan was restoring its sovereignty in enemy-occupied territories and the Armenian side was broadcasting to the world an informational myth about the right of peoples to self-determination. However, even within the framework of that paradigm, the Armenian troops have repeatedly subjected Azerbaijani cities located deep in the rear, far from the front line, to deadly shelling. Moreover, they did this, including from their own territory, from the regions of Armenia bordering Azerbaijan. Did it help the Armenians during that war? No.

But stupidity is notoriously comprehensive. And if the Armenian side failed to draw the right political conclusions from the previous war, delaying the conclusion of a peace agreement with mutual recognition of territorial integrity, the Armenians cannot be expected to draw the right conclusions from military strategy either. Accordingly, in the current situation, when the enemy promotes a new myth about the attempts of Azerbaijani Armed Forces to aggression against Armenian territory on the state border, which, we repeat, is still not recognized by Armenians themselves, the Armenian army command will probably resort to firing rockets at Ganja and Barda even more frequently. That is precisely why Armenia is buying Indian MLRS to bombard deep Azerbaijani rear in case of new clashes from somewhere in Basarkechar. Moreover, at the moment when our armed forces will once again suppress enemy activity in Kalbajar or Lachin, for example.

In conclusion, it should be said a couple of words about the capabilities of our command in the sense of fighting the Pinaka MLRS batteries, in case they are really used against us as described above or in any other way. As is known, during the 44-day war the Azerbaijani command was not very active in terms of destroying military targets on the territory of Armenia, limiting itself for both strategic and operational reasons to the combat operations on its own territory. However, as the last battles in September on the notional border showed, the Azerbaijani Armed Forces are able to strike at targets located in the operational or even strategic depth of the enemy’s territory. Not on peaceful settlements, as the Armenian military is used to doing, but on a point-by-point basis, as it was done during the recent September battles on the targets, which are what is still called “Armenian Air Defence Forces”, their radars, anti-aircraft missile systems and control points. Except for that next time, it will be these very same Pinaka MLRSs that will be destroyed.