In the presence of the President of the European Commission, Ursula von der Leyen, and five regional leaders, the Bulgarian-Greek gas connection, through which our country already receives Azeri natural gas, was officially launched in Sofia. In her speech she stated: 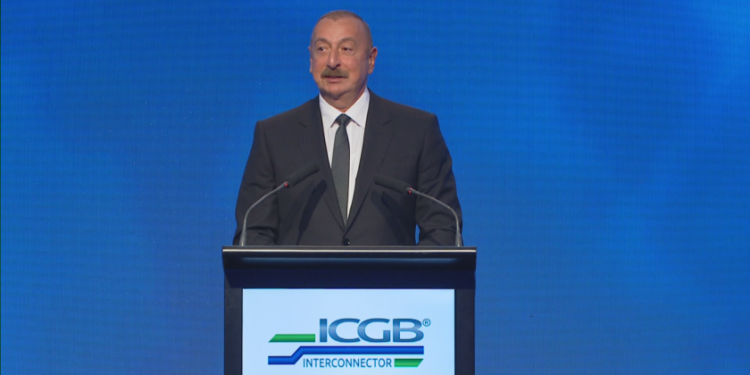 The President of Azerbaijan: We plan to double gas supplies to Europe by 2027

“The project for an interconnector between Bulgaria and Greece has been on the table for over 10 years. It was started back in 2009, at a time when Bulgaria was very badly affected by Gazprom’s decision to stop the flow of gas through Ukraine. It took a lot of determination, to achieve the goal. It really takes a lot of desire, passion and will for such a project. I would like to express my sincere gratitude to you – the interconnector team and also thank all the Bulgarian and Greek governments and leaderships for helping let it happen. The EU has supported this project from the beginning both politically and financially with nearly 250 million euros. I would say that today a new era begins for Bulgaria and Southeast Europe. Bulgaria used to get 80% of its gas from Russia, but that was before Russia starts a terrible war against Ukraine, an energy war against Europe. This gas pipeline is a game-changer for both Bulgaria and Europe’s energy security. This project means freedom from the bridge of Russian gas. The interconnector can cover the entire gas consumption of Bulgaria and this is great news in such difficult times“.

The ceremony began shortly after 11:00 a.m. in the National Palace of Culture. In the hall are the presidents of Azerbaijan Ilham Aliyev, of Serbia – Aleksandar Vucic and of North Macedonia Stevo Pendarovski, the prime ministers of Greece – Kyriakos Mitsotakis and of Romania – Nicolae Ciuca. 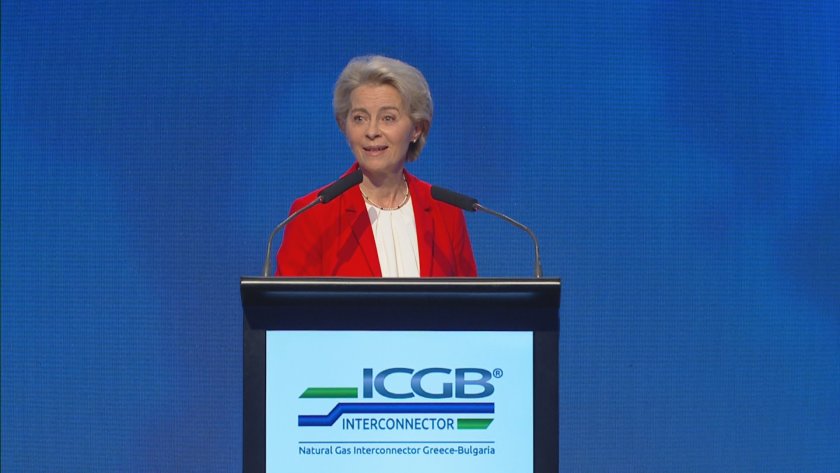 From today, a new era begins for Bulgaria and for South-Eastern Europe, the President of the European Commission, Ursula von der Leyen, said in Sofia. She reminded that the EU supports this project from the very beginning, both politically and financially with 250 million euros.

“Bulgaria used to get 80% of the gas it used from Russia. This was before Putin decided to start an energy war against Europe. This gas pipeline is a game-changer for both Bulgaria and Europe’s energy security. This project means freedom from dependence from Russian gas. This interconnector can cover all gas consumption from Bulgaria, which is great news in these difficult times,” she pointed out.

Thanks to projects like this, Europe will have enough gas for the winter and should continue to invest in renewable energy sources such as wind and solar power plants, stressed the president of the EC.

According to her, Europe has everything it needs to free itself from its dependence on Russia, and it is a matter of political will.

“We are at a crossroads. The energy crisis is serious and requires a united response from Europe to allow us to reduce energy costs for families and businesses. We have already taken serious steps in this direction, but in doing so we must preserve the foundations of our economy and in the single market. Without a single European response, we put ourselves at serious risk of fragmentation,” she warned.

All this will be the topic of a meeting of European leaders in Prague. 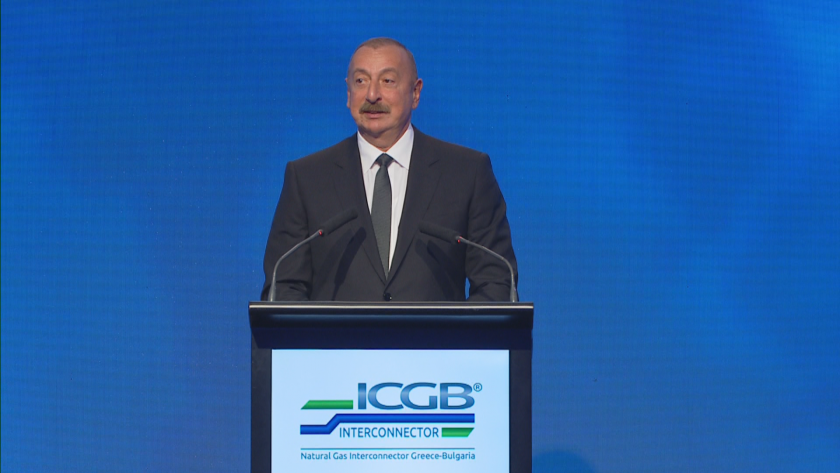 The President of Azerbaijan: We plan to double gas supplies to Europe by 2027

The interconnector between Bulgaria and Greece will play a very important role in ensuring energy security and diversification of supplies for Europe. This was stated by the President of Azerbaijan Ilham Aliyev at the opening ceremony of the gas connection.

In July, Azerbaijan signed a memorandum of cooperation with the European Commission and by 2027, on the basis of this document, plans to double the supply of natural gas to Europe, Aliyev also said.

“Azerbaijani gas has been on the market in Europe for years, and the Southern Gas Corridor is one of the largest infrastructure projects in the region. Azerbaijan is proud to initiate this corridor and bring gas to consumers through a new route and from a new source. Until now, the only source is from the Caspian Sea, but there are several other gas fields in Azerbaijan that will soon start producing and will contribute to the increase in quantities,” said Ilham Aliyev.

Based on the cooperation memorandum with the EC, Azerbaijan will soon supply electricity from renewable sources to Europe, the president announced. 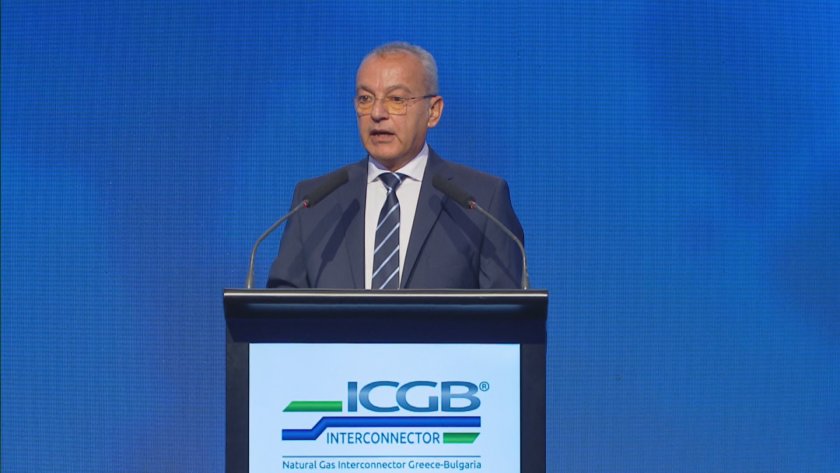 The interconnector between Bulgaria and Greece makes our country less vulnerable and improves our ability to negotiate. This was stated by acting Prime Minister Galab Donev in his speech during the official commissioning ceremony of the gas connection with Greece.

“As of today, the new gas pipeline is operational. It has sufficient capacity to satisfy all needs at the domestic level and will ensure the diversification of sources and supplies of natural gas for Bulgaria, which is of key importance,” said Donev.

The interconnector has the potential to contribute to ensuring the much-needed security of supplies at reasonable prices for Bulgaria and our partners in Europe, he added.

Galab Donev also pointed out that the deliberate violation of gas connections in the Baltic is another warning that the security of supplies to Europe can be compromised quickly.

Bulgaria welcomes the memorandum between Europe and Azerbaijan on strategic cooperation and increasing gas supplies.

“The interconnector will provide not only Bulgaria, but also the entire transmission from Greece to Romania, Moldova, Ukraine and Central Europe. The potential will be even more visible after they stratify the operations of the Alexandroupolis terminal. The operator of the interconnector will benefit from the Alexandroupolis terminal as a link to the Southern Gas Corridor,” he said. 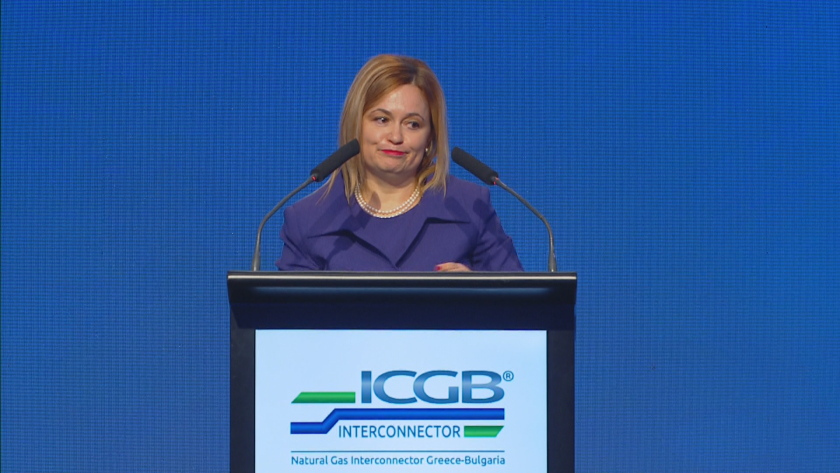 Teodora Georgieva, ICGB: Today we are taking a big step forward towards a stronger and more independent Europe

“October 1 is an important date for all of us – today we mark the beginning of a project that goes far beyond the borders of Greece and Bulgaria. Today we are entering a key stage in the development of the energy system in the region and we are taking a big step forward towards a stronger, more closely connected and more independent Europe”, said Teodora Georgieva – executive director of ICGB, the company – operator of the interconnector from the Bulgarian side.

The commissioning of the interconnector began after exceptional challenges and thanks to the political will of the governments of Bulgaria and Greece, the trust and support of the European Commission and the work of everyone in the energy sector, emphasized Georgieva.

“I want to express my gratitude to President Rumen Radev, who is personally committed to the completion of this project before the start of the heating season. I also want to thank Mrs. von der Leyen for her support and the energy companies of Bulgaria and Greece. It is no coincidence that I said that the interconnector will change the map not only for Bulgaria, where it will lead to energy independence, but also for the whole of Europe“.

From today we can confirm and guarantee deliveries not only for Bulgaria and Greece, but for the whole of South-Eastern Europe. We can also provide supplies to Moldova and Ukraine in these extremely difficult times, Georgieva also said. 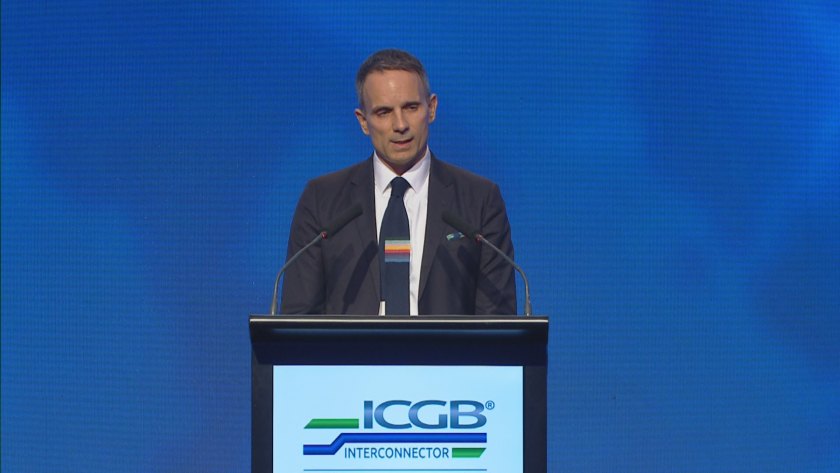 George Satlas – Executive Director of the ICGB, from the Greek side, also expressed gratitude to the governments of both countries.

“After celebrating today’s success, I want to commit to very important next steps – to focus on energy security and environmental protection, so that the project works efficiently, justifying the investment of all who helped to ensure the energy security of Southeast Europe.” 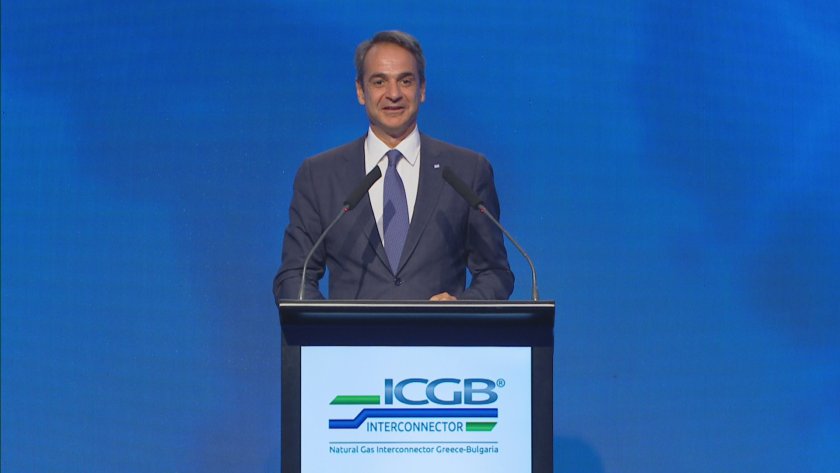 Kyriakos Mitsotakis: The interconnector dramatically changes the energy map of the region

The commissioning of the interconnector with Greece is an important moment not only for South-East Europe, but also for Europe in a wider plan, because the gas pipeline will strengthen the security of supply and energy for all the countries of the Balkans and for the whole of Europe, said the Prime Minister of Greece Kyriakos Mitsotakis at the opening ceremony of the gas connection in Sofia.

“This dramatically changes the energy map of the region and is the result of the cooperation and coordination of efforts between our two governments. Gas supplies from Azerbaijan to Bulgaria will break the tight grip of Russian gas on the region and together with the other infrastructure projects that are underway, will contribute for the development of a gas network that can be relied on,” the Greek Prime Minister pointed out.

Greece is playing an increasingly active role in the regional energy hub, which will serve not only Bulgaria, but also all the countries of the region, Mitsotakis emphasized, giving as an example the project in Alexandroupolis, where it will be possible to store and distribute supplies.

“The gas pipeline, moreover, connects European countries sharing the same values. It is also a concrete expression of our confidence that we will cope with the challenges of the future,” he pointed out.

Mitsotakis backed EC President Ursula von der Leyen’s call for a pan-European solution to the gas crisis and high prices and expressed hope that a solution would be reached at the summits in Prague and Brussels.