NAC Kazatomprom said it is working to increase the 3500 tU quota limit on its trans-Caspian route, an alternative to shipment via St Petersburg. 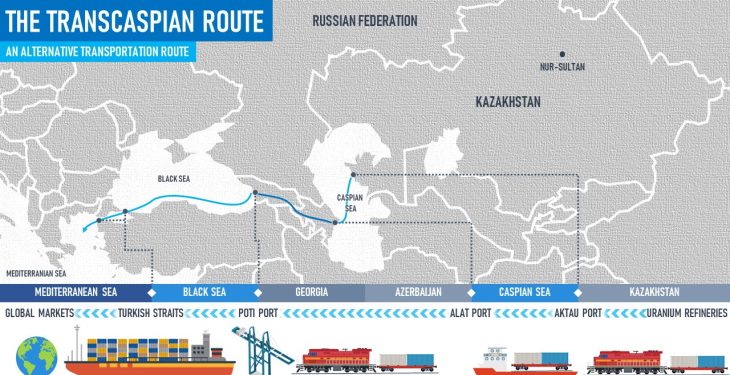 However, shipments via the alternative route may be subject to delays as it passes through different jurisdictions – Cameco said some material from the Inkai joint venture is currently being held up in Azerbaijan.

Kazatomprom’s uranium shipments have up to now continued to pass through St Petersburg, and there are to date no restrictions on its activities related to the supply of its products to customers worldwide, the company said in its Q3 results, although it continues to monitor the “growing list of sanctions on Russia” and their potential impact on the transportation of products through Russian territory. It shipped its third quarter volumes via St Petersburg without any disruptions or logistical/insurance-related issues.

The Trans-Caspian International Transport Route (TITR) – used by Kazatomprom since 2018 as an alternative to the St Petersburg route – helps to mitigate the risk of the primary route being unavailable, for any reason. The company said it is working to increase the quota limit for that route, and is also assisting its joint venture partners “if they would prefer not to receive their share of material via the established route that passes through the port of St Petersburg.”

The TITR requires the use of chartered sea vessels on the Black Sea rather than commercial shipping companies, and to maximise cost efficiencies, material must be consolidated at the Port of Poti in Georgia, the company said. The Kazatomprom-owned portion of a shipment that is currently under way via the TITR has reached the Port of Poti without issue. However, shipments of material from Kazatomprom’s joint venture operations can encounter delays due to the requirements of transit country authorities. One such shipment sourced from Inkai – a 60:40 joint venture of Kazatomprom and Cameco – currently en route to join the material already waiting at the Port of Poti has been delayed, it said.

“As it is the first time the TITR-related jurisdictions are reviewing such arrangements, there is an elevated risk of transportation delays,” Kazatomprom said.

Whether shipped by Kazatomprom or its partners sharing Kazakh assets, the product remains of Kazakh origin through to its arrival at a western conversion facility, the company said.

In its own Q3 results call, Cameco – Kazatomprom’s partner in Inkai – reiterated that it does not take title to material shipped from the joint venture until it is received at the company’s Blind River refinery in Canada. Sean Quinn, Cameco’s senior vice president and chief legal officer, confirmed that the shipment from Inkai which is currently en route has been delayed in Azerbaijan due to regulatory requirements and is awaiting permits to continue its journey.

“We’re optimistic that it will get through,” Quinn said, adding that the shipment is not expected to encounter further problems as it passes through Georgia and onto the Black Sea. “We anticipate it will go smoothly once it’s through Azerbaijan,” he said. “It’s a delivery route that has been used before, so we’re quite optimistic it will work in due course.”