In the days since the Brussels summit of the leaders of Armenia and Azerbaijan on April 6, diplomatic activity around the peace process between the two countries has intensified. 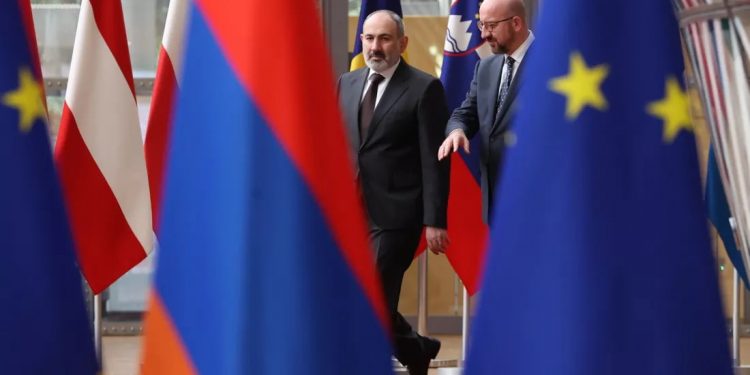 In contrast to the first year after the Second Karabakh War, the role of the EU in this context has grown and provides a viable alternative to the Russia-led track in the negotiations. Against this backdrop, as agreed in Brussels, Armenia and Azerbaijan have launched the preparatory work for a peace treaty which triggered a bilateral phone conversation between the Armenian and Azerbaijani foreign ministers – the first time this happened in recent decades.

In his meeting with EU’s special representative Toivo Klaar in Baku on April 19, President Ilham Aliyev noted that the Brussels summit was “the starting point” for the normalization of Armenia-Azerbaijan relations and the work towards a peace treaty. This is a notable fact. Although Armenia and Azerbaijan have been negotiating in the Russia-mediated trilateral format for more than a year, such an important development in this direction was achieved via the mediation of the EU.

On April 13, in his speech before the Armenian parliament, Prime Minister Nikol Pashinyan elaborated on the details of the peace talks and stated that the international community is pushing Armenia to “lower the bar a bit on Nagorno-Karabakh’s status” and recognize Azerbaijan’s territorial integrity, which would entail ceding control of the territory to Baku.

Many Armenian and foreign observers interpreted this as an extraordinary shift in the rhetoric of the Armenian government, and argued that “given that Pashinyan delivered his speech a week after the meeting in Brussels, we might assume that the EU is among those actors asking Armenia to change its position, though the US and Russia could also be part of the equation”.

In fact, this is not the case, for Pashinyan had been pushing this approach long before his April 13  speech to the Armenian parliament. In his press conference with the Armenian media on November 23, he, for the first time, declared that “the Artsakh [the Armenian name for Karabakh] issue is a matter of law, and has nothing to do with territory”, adding that “Armenia and Azerbaijan [have already] recognized each other’s territorial integrity under the documents of the Commonwealth of Independent States (CIS) in 1991”.

During his December 24, 2021 press conference, Pashinyan went further and signaled that any resolution to the status issue of Karabakh is to be made within the constitution of Republic of Azerbaijan as the international community recognized the region as part of Azerbaijan in 1993 when the UN Security Council adopted four resolution on this matter.

Although these statements in late 2021 caused some protests in Armenia, these were not as extensive as those that took place after the aforementioned speech of prime minister before the parliament on April 13. His latest comments were perceived as shocking by parts of Armenian society since Pashinyan reiterated them again this time in the context of the negotiations on a peace treaty, which means that the eventual treaty would be formed on this basis.

These developments are not welcome by Russia-aligned revanchist forces in Armenia, separatist groups in Azerbaijani Karabakh, or, to some extent, by Russia. Three days after the Brussels summit, on April 9, in his meeting with Armenia’s Foreign Minister Ararat Mirzoian in Moscow, Russian Foreign Minister Sergei Lavrov clearly expressed his displeasure toward the West’s refusal to cooperate with Moscow in the Armenian-Azerbaijani peace process.

The pro-Russian parliamentary opposition in Armenia, the members of former governments, and separatist groups in Karabakh, feel threatened by the prospect of Yerevan formally recognizing Karabakh as part of Azerbaijan. Therefore, they try to prevent this by all means. A referendum on becoming part of Russia might be one such response for some Karabakh Armenians. They hope that Russia will be guarantor for the existence of Karabakh outside the control of Azerbaijan if Armenia goes ahead and recognizes the region as part of Azerbaijan’s sovereign territories. The pro-Russian groups in Armenia, as well as the Russian media, amplify these statements and overtly call Russia to take actions towards this end.

Against the backdrop of these developments, and the protests against the EU-mediated peace efforts, it is important that the Armenian and Azerbaijani governments receive support from the West for their ongoing efforts. The State Department of the United States in a tweet on April 18 declared support to “Prime Minister Pashinyan’s recent comments on peace negotiations with Azerbaijan”, which apparently referred to his April 13 speech and as such can be interpreted as the backing of the United States to Armenia’s recognition of Azerbaijan’s territorial integrity including the Karabakh region. This support by the EU and the United States is going to be critical as the region faces threats and challenges related not only to the normalization of the Armenia-Azerbaijan relations, but also with regards to what happens after that.