Tensions Flare Up Between Iran And Azerbaijan, Amid Military Drills, Claims And Counterclaims

Relations between Iran and its neighbor Azerbaijan have steadily deteriorated over recent weeks, fueled by military drills on both sides of the border, allegations of an Israeli military presence and the imposition of border controls on a road straddling the Armenia-Azerbaijan border. 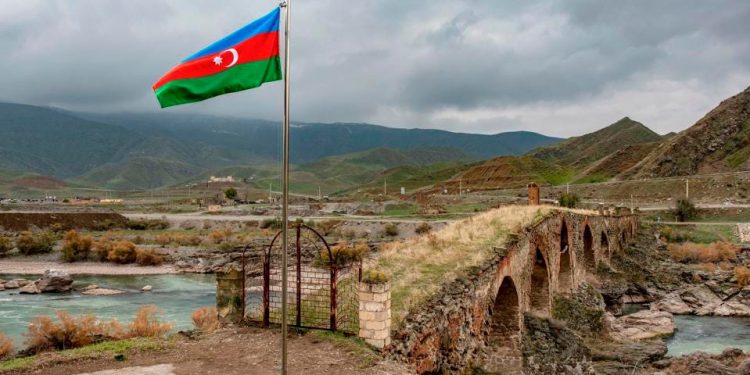 Iranian forces began a military exercise close to the Azerbaijan border on October 1. The war games were named Conquerors of Khaybar, in an apparent reference to the Battle of Khaybar in 628CE in which Muslims fought against Jews in what is now Saudi Arabia. Azerbaijan’s President Ilham Aliyev had criticized the exercises in advance, saying to Turkey’s Anadolu Agency in late September “Every country can carry out any military drill on its own territory. It’s their sovereign right. But why now, and why on our border?”

It is the not the only set of drills to have caused tensions. On September 12, Azerbaijan launched a joint exercise with Turkey and Pakistan, prompting a warning from Iranian Supreme Leader Ayatollah Ali Khamenei’s representative in Ardebil province (which borders Azerbaijan) “not to play with the lion’s tail.”

A day later, Azerbaijani MP Gudrat Hasanguliyev said Iran’s own Azeri minority could cause trouble in the event of any conflict with Baku. Iran’s “direct and indirect support of ethnic separatism in Azerbaijan does not bode well for the territorial integrity of Iran, where 30 million Azerbaijani Turks and many other nations live,” he said.

Iranian officials have also been making claims about Israeli military activity in the region. Most recently, foreign minister Hossein Amir-Abdollahian said on October 6, while on a visit to Moscow, that Tehran was “deeply concerned by Israel’s presence in the Caucasus.”

Azerbaijan used Israeli-made armed drones in a brief conflict with Armenia last year (one in which Iran was also seen to support the Azerbaijan side) and ties have continued to develop since then, with an Azerbaijan trade office opening in Tel Aviv this summer. Iran now says Israeli military advisers are active in Azerbaijan.

Azerbaijan has denied such claims, with Ministry of Foreign Affairs spokeswoman Leyla Abdullayeva saying on October 4 “We do not accept the allegations about the presence of any third forces near the Azerbaijan-Iran border … because these views have no basis.”

Israel’s ambassador to Azerbaijan George Deek has arguably not helped matters by stepping up his criticism of Iran on Twitter and saying, in a video posted on September 1, that “I have been near the border many times.”

The 44 days of fighting between Armenia and Azerbaijan last year ended with a Russian-brokered agreement between the two sides, but not before Azerbaijan had captured a swathe of territory.

The ground that changed hands included an area covering a 20km stretch of road linking the southern Armenian towns of Kapan and Goris. The road now crisscrosses the de facto border between the two countries along the route from the Iranian border to the Armenian capital Yerevan.

Earlier this year Azerbaijan set up new border posts in the area it now controls and, last month, began imposing tolls of $130 on Iranian trucks travelling the route. (There is a similar situation in the northwest of Armenia, where a main road to the Georgian border cuts across Azerbaijan territory at a number of places near the town of Voskepar).

In his September interview with Anadolu Agency, President Aliyev said around 60 Iranian trucks had entered Azerbaijani territory without permission between August 11 and September 11. “Then we started to control the road passing through Azerbaijani land, and the trucks sent by Iran to Karabakh came to an end,” he said, adding that if they crossed Azerbaijani land they should pay taxes.

At least two Iranian truckers have also been detained on the road, prompting warnings from Tehran. “Officials in Baku should be more careful about their border guards’ treatment of Iranian nationals,” said Iranian Foreign Ministry spokesman Saeed Khatibzadeh on October 4.

Meanwhile, relations between Tehran and Armenia are improving. Armenian foreign minister Ararat Mirzoyan was in Tehran on October 4, holding talks with his Iranian counterpart. On the same day, Iran’s ambassador to Yerevan held a meeting with Armen Grigoryan, secretary of the Security Council of Armenia.

Iran has also offered to help Armenia finish an alternative route from the border via the town of Tatev. A 15km stretch of road needs to be upgraded but, once that is done, it will enable Iranian traffic to bypass Azerbaijan-controlled territory. Iran’s deputy transport and urban development minister Kheirollah Khademi travelled to Yerevan in early October to examine the project.

Small new arguments continue to flare up, adding to the sense of geopolitical shifts. Azerbaijan’s Interior Ministry said this week that the Baku office of Ali-Akbar Ojaqnezhad, a representative of Iran’s supreme leader, has been closed. The official reason was that it was part of measures to battle the coronavirus pandemic. The Iranian embassy in the city has been pushing for it to be reopened.

Whether the war of words and the military posturing build up to something more serious remains to be seen, but as yet there are few signs of either side taking steps to reduce tensions.

Dominic Dudley is a freelance journalist with almost two decades’ experience in reporting on business, economic and political stories in the Middle East, Africa, Asia and Europe.