The Long Road to Peace in Nagorno-Karabakh

Rarely has an election in a small post-Soviet country been watched so closely. Armenia held a snap poll on June 20, after months of turbulence following its crushing defeat in an unexpected six-week war with Azerbaijan over the long-disputed region of Nagorno-Karabakh late last year. 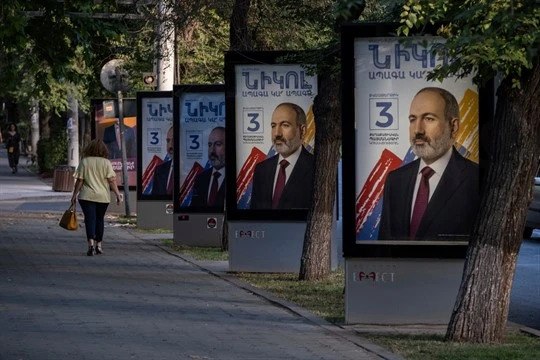 At times, the passions and pressure generated by the war’s outcome had been so intense that it looked as though the Armenian state would not survive. Yet not only did embattled Prime Minister Nikol Pashinyan survive, he won a strong new mandate, against all odds.

The fighting last year killed more than 7,000 people in total, mostly young conscripts on both sides, and left much of the disputed region under Azerbaijani control. A cease-fire brokered on Nov. 9 by Russian President Vladimir Putin confirmed a complete reversal of fortunes, in which Armenians ceded territory they had held for more than 25 years and, with it, their project of the past three decades: to build a new ethnic-Armenian state in Nagorno-Karabakh, renamed the Republic of Artsakh. With the deployment of Russian peacekeepers to the region as part of the truce, Yerevan abruptly ceded its role as patron of Nagorno-Karabakh—a majority Armenian enclave that is within the internationally recognized borders of Azerbaijan—to Moscow.

By contrast, many Azerbaijanis felt that despite the heavy human toll, a curse had been lifted from their country. In particular, Baku regained control over seven districts that had been under long-term Armenian occupation. It will take many years for those districts to be free of land mines and habitable again, but the right of return has finally been made real for more than half a million displaced Azerbaijanis. President Ilham Aliyev is basking in the military victory as a personal triumph, using it to further consolidate his control over the country.

On the other side, Pashinyan found himself in a harsh spotlight. He had come to power on a wave of popular support in Armenia’s peaceful revolution of 2018, revered at the time as “Saint Nikol.” But following the November cease-fire, most of the Armenian military and political establishment, as well as the church, lashed out at him for his disastrous mishandling of the conflict. So how did he pull off a victory in last month’s election?

In one sense, Pashinyan was lucky. His main adversary, Robert Kocharyan, a Karabakh leader during the 1990s who went on to serve two terms as president of Armenia, is a highly controversial figure.

Casting himself as the man who could defend the security of Armenia and of Karabakh Armenians, Kocharyan sought to make the election all about Pashinyan’s mishandling of the 2020 conflict. But Pashinyan countered by harking back to the “Velvet Revolution” of 2018, which gave Armenians freedoms that they had been denied for two decades. That effectively made the election a referendum on whether voters wanted to go back to the pre-2018 political order. In particular, many Armenians remember Kocharyan’s 1998-2008 presidency as a time of domination by a small, corrupt, elite clan that exclusively controlled large sectors of the economy.

Pashinyan, a fiery campaigner who has retained his popular touch, evidently delivered the more persuasive message. To the surprise of many, his Civic Contract party received more than half the vote and 71 out of 107 seats in parliament, with Kocharyan’s party coming in a distant second.

As a result, Armenia remains what has been called a “one-and-a-half party system,” with a powerful governing party, a weak opposition and poorly developed governing institutions. Yet the fact that Armenia held a relatively free and fair election without a preordained result for the second time in three years is a good harbinger for the future, suggesting that, like neighboring Georgia, the country is acquiring the habit of democracy.

The election was also closely watched in Azerbaijan, where opposition-minded citizens looked on with some envy at the democratic process. For Azerbaijani officials, Pashinyan’s victory was a relief. As one of three co-signatories of the Russian-brokered cease-fire, he is the person they count on to continue consolidating a fragile truce.

A range of medium-term issues are crowding out hopes for progress on resolving the root of the conflict: the dispute over the status of Nagorno-Karabakh.

Intense negotiations lie ahead. Yerevan’s top priority is the 200 Armenian detainees still in captivity in Azerbaijan, whom Baku claims were captured after the November cease-fire and thus do not qualify as prisoners of war. The government has even begun putting several of the prisoners on trial, accusing them of sabotage and terrorism. Armenia, supported by the European Union and the United States, says they are subject to humanitarian law and must be allowed to return home.

For the Azerbaijani side, the main issue concerns land mines in the seven districts that have now been returned to its control. Baku has asked for minefield maps of the districts, only to be told by the Armenians that there are none.

Every issue, including humanitarian concerns, has become a matter of bargaining. On June 12, a deal was brokered by the Georgian government in which 15 Armenian detainees were freed in return for Armenia handing over minefield maps—which turned out to exist, after all—of the Aghdam region. No less a figure than Emine Erdogan—the first lady of Turkey, a country that provided critical military aid to Azerbaijan during the conflict—was then filmed in a video advising Aliyev to release the Armenian captives one by one in exchange for further concessions from Pashinyan’s government.

Following his election victory, Pashinyan will be under pressure to deliver to Azerbaijan on domestically unpopular issues. Chiefly, he will be expected to honor his commitment in the November cease-fire statement to facilitate “economic and transport links” across Armenia in order to facilitate the free flow of goods and people to the Azerbaijani enclave of Nakhichevan, which borders Turkey and was cut off from the rest of Azerbaijan 30 years ago.

Baku calls this transport route a “corridor” across the Meghri region of southern Armenia. Yerevan, anxious at the prospect of its border territory with Iran—an important strategic partner—becoming an Azerbaijani-Turkish corridor, is calling for other routes to be explored via the capital, Yerevan, which would deliver it more benefits.

The opening of new transport routes is also a priority for Moscow. A road and rail connection to Nakhichevan would connect Russia to Turkey, via Azerbaijan, for the first time since the Soviet era, bypassing the territory of its main adversary in the South Caucasus, Georgia.

Russia’s other ambition will be to maintain its new military presence in the region beyond the five-year expiration date of November 2025, when its peacekeeping mission in Karabakh can either be renewed or terminated at the request of any one of the three signatories of the cease-fire—presumably Azerbaijan.

All of these medium-term issues crowd out hopes for progress on a political resolution of the dispute over the status of Nagorno-Karabakh, the issue that triggered the initial conflict between Armenians and Azerbaijanis in 1988. The two sides still hold diametrically opposite positions on the matter, though Azerbaijan now has the upper hand. A full-fledged peace agreement and normalization of relations between Armenia and Azerbaijan will only be possible when that issue is resolved.

The United States, along with France, formally remains a mediator of the conflict, as one of the three co-chairs of the OSCE Minsk Group, along with Russia. But there is little to talk about on the political side at present. Other more immediate contentious issues are set to crowd the attention of the two adversaries and of Russia for some time yet. With a final Armenian-Azerbaijani peace agreement still far off, the United States and European countries must also focus on shorter-term priorities, such as humanitarian aid, demining, reconstruction and promoting dialogue both between the two societies and within them.

All stakeholders have been given a breather with Pashinyan’s reelection for a new five-year term. But Armenia is still fragile, with weak state institutions and a prime minister who has so far proved himself a brilliant campaigner but a poor administrator. After the euphoria of military victory, Azerbaijan faces years of hard work to restore and repopulate its recaptured territories. Both countries have been hit hard by the COVID-19 pandemic and their economies are much weaker than they were a year ago. All told, this still looks like a precarious truce in a precarious region.

Thomas de Waal is a senior fellow with Carnegie Europe based in London. He is the author of several books on the Caucasus, including “The Caucasus: An Introduction” and “Black Garden: Armenia and Azerbaijan Through Peace and War.”