Turkey’s sun is rising in the East – is it setting in the West?

“Who lost Turkey?” has been a running question among Turkey watchers for years, a reference to fears that the supposedly secular Muslim-majority state would cut ties with the liberal-minded West and turn to the purportedly more closed-off, and Islamist, East. 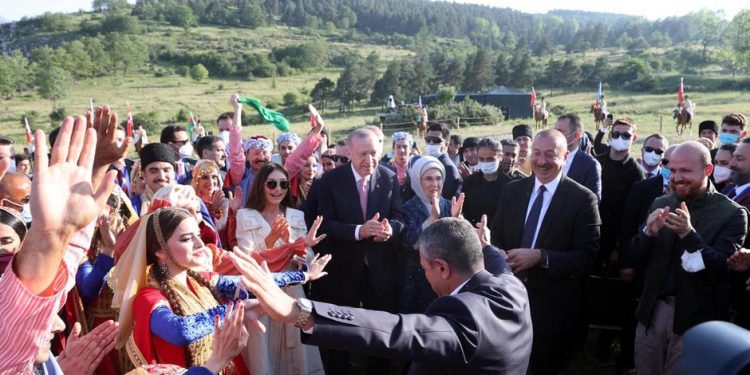 Today the question is largely a cliche and that’s mostly a good thing, since only Turkey is to blame for its orientation, which has rarely been static.

President Recep Tayyip Erdogan paid a visit to Azerbaijan last week, looking to claim his country’s spoils after Turkey’s military advisers and advanced drones provided crucial backing in the Azeri victory over Armenia in last year’s war in Nagorno-Karabakh. In Shusha, a city retaken by Azerbaijan in the conflict, the Turkish leader promoted a plan to build a rail link from south-western Azerbaijan to its exclave, the Nakhchivan Autonomous Republic, which has been cut off by Armenia since the 1990s.

“With the implementation of this project,” Mr Erdogan declared, “a new middle corridor will be opened that everyone can benefit from, from East to West.”

Its first show of military might in former Soviet territory, Turkey’s key role in Nagorno-Karabakh has already expanded its influence in the Caucasus and Central Asia. Mr Erdogan’s comment suggests it may also serve as a springboard to revive Turkey’s proposed Middle Corridor leg of China’s Belt and Road Initiative, which aims to revive the Silk Roads.

Since 2015, Ankara has urged Beijing to embrace a middle route from China to Europe situated between the northern route, which involves Russia’s Trans-Siberian Railway, and a southern route through Iran. Proponents argue that harsh Siberian winters and political tensions between Russia and Georgia raise questions about the former, while the 2018 renewal of US sanctions on Iran imperils the latter. With the Zangezur Corridor line linking Azerbaijan to its exclave and the Kars-Tbilisi-Baku link opened in 2017, Turkey’s Middle Corridor could soon offer two newly developed routes.

For now, Nakhchivan remains separated from south-western Azerbaijan by a 25-kilometre-wide stretch of Armenia’s Syunik region. To get there, Azeri mainland shipments have, since the first Azeri-Armenian war in the 1990s, had to either fly or transit through Iran.

But as part of the November ceasefire, Armenia agreed to “guarantee the security of transport connections between the western regions of the Republic of Azerbaijan and the Nakhchivan Autonomous Republic”. The new railway would boost the economy of Nakhchivan and provide Turkey with a direct connection to the Caspian Basin that, according to some Turkish analysts, could also be used by Beijing.

“Transport, communications, infrastructure projects passing through Zangezur will unite the entire Turkic world,” Azeri President Ilham Aliyev asserted in March, a reference to the shared heritage of the people of Azerbaijan, Turkey and the Central Asian states. But it’s far from a done deal.

Weeks after Mr Aliyev broke ground on the last stretch of railway before the Armenian border, Armenian Prime Minister Nikol Pashinyan expressed support for the proposed railway, for which Armenia would in return be able to build a rail link to Iran. But Widespread anger about the military defeat forced Mr Pashinyan to resign in April, and although he won Sunday’s parliamentary election, he has waffled on the Zangezur Corridor plan in his capacity as the caretaker prime minister. His main challenger in the snap poll, former president Robert Kocharyan, had vowed to oppose the new railway, in an apparent renunciation of the ceasefire deal.

To top it off, a 2014 study by International Alert, an international peacebuilding organisation, estimated that rehabilitating the Kars-Baku route via Nakhchivan would cost more than $430 million. And even once it is built, Russian oversight of the rail corridor may limit its ability to serve as a geopolitical gamechanger.

Yet the momentum may be in Turkey’s favour. After the ceasefire, Turkey gave Azerbaijan “most favoured nation” trade status and Baku responded by awarding a series of contracts to Turkish firms: to develop the state lottery; operate three major mines; and build new Central Bank headquarters and new roads in areas retaken in the war.

Last week, Mr Erdogan and Mr Aliyev agreed on a new Turkish consulate in Shusha, increased security co-ordination, Turkish drone production in Azerbaijan and Turkey’s housing agency building homes for up to half a million displaced Azeris who may now return to Nagorno-Karabakh. There’s talk of a Turkish military base and Turkey’s far-right parliamentary partner, the National Movement Party, is expected to help build an arts school in Shusha.

A year ago, Azerbaijan overtook Russia to become Turkey’s top supplier of natural gas, thanks mainly to the Tanap pipeline completed in late 2019. In December, Ankara and Baku agreed to build a gas pipeline from Turkey’s Igdir province to Nakhchivan, rerouting Azerbaijani gas sold to Turkey back to Azerbaijan’s exclave and weaning Baku off its pricey reliance on Iran. Azerbaijan’s state-owned energy firm Socar is the biggest foreign investor in Turkey, yet it has also been linked to a vast corruption web by Turkish mafia figure Sedat Peker, whose recent accusatory videos have gone viral.

Baku is not alone in its Turkish affinity. In February, Ankara agreed with Azerbaijan and Turkmenistan to transit gas from their joint Dostluk field to Europe. The next month, Turkey’s foreign and defence ministers paid visits to Central Asia, talking up partnerships, while Mr Erdogan called for a doubling of trade within the Economic Co-operation Organisation, which includes the Central Asian republics. A number of Central Asian states have expressed interest in Turkish drones and Ankara has detailed its plan to create a common market for goods, investment, labour and services by 2028.

There are signs that Turkey’s role in the Azeri victory may be bringing Beijing onside. Last December, trains from Turkey arrived in China via the Kars-Tbilisi-Baku line for the first time and the first freight train from Turkey arrived in China via the Trans-Caspian corridor. Now China looks set to become a major investor in the financially troubled Yavuz Sultan Selim Bridge and its connecting roads, and has offered to invest billions in the proposed Istanbul canal.

Looking to encourage greater Chinese investment amid a long-running economic crisis, Turkish officials have in recent years mostly refrained from commenting on Beijing’s reported persecution in Xinjiang province. Just weeks after Turkey approved a new extradition treaty with China in May 2019, Beijing provided a $1 billion cash infusion, its largest ever.

But Turkish-Chinese trade has fallen as Ankara has made import-related policy changes that have affected China more than any other country, according to monitoring group Global Trade Alert. Talks on a Chinese-built nuclear power plant in Turkey fell through after the Japanese-French consortium building Turkey’s Sinop plant saw costs skyrocket. For years, Turkey sought to get China to pay for its rail modernisation, but balked at Beijing’s insistence that the contracts go to Chinese firms. In 2018, Turkey reached a $40bn deal with a Siemens-led German consortium to build new railway lines and improve old ones.

This underscores one of the more intriguing elements of Turkey’s approach to the Caucasus and Central Asia, which is mainly as an alternative to China and Russia. Ankara’s position largely dovetails with that of its Nato allies: both seek to ensure stability in the Caucasus, carry Caspian gas westward and curb Central Asian dependence on Beijing and Moscow.

For instance, in late May, tensions remained high as Yerevan accused Baku of torturing Armenians in custody and encroaching militarily in Armenian territory. But the US and Georgia brokered an Azeri-Armenian deal, with Baku handing over 15 Armenian captives and Yerevan sharing maps of its mine placements. Top US diplomat Philip Reeker’s visit this month to Tbilisi underscored the Biden administration’s effort to use Georgia to counterbalance Russia, and Armenia and Azerbaijan seem willing to oblige.

As in Afghanistan, shared objectives in the Caucasus and Central Asia represent an opportunity for Ankara to work with Washington and Brussels. In the end, Turkey’s latest turn to the East may be a route back to the West.