The first round of negotiations between the special representatives of Turkey and Armenia aimed at normalizing relations was held in Moscow, at the Russian Ministry of Foreign Affairs, on January 14. Signals regarding the results of the meeting from both sides were primarily positive. 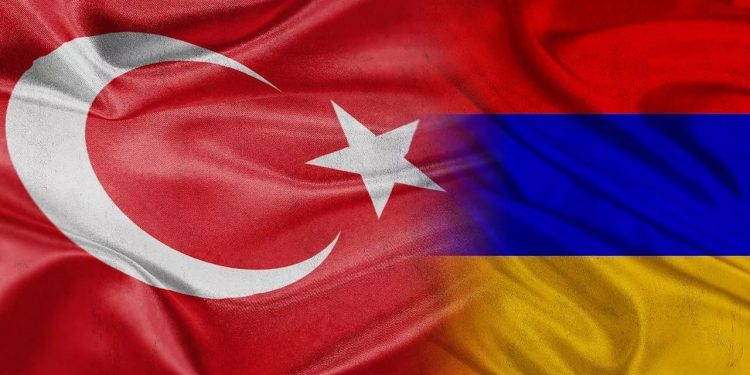 After nearly two hours of talks, the two countries’ foreign ministries circulated the same text, announcing an agreement on normalizing relations without preconditions (Mfa.gov.tr, Mfa.am, January 14). According to the statement, the meeting was conducted in a positive and constructive atmosphere, with an exchange of preliminary views related to the normalization process. The date and place of the second meeting will be decided in due time, through diplomatic channels. No other details came out of the closed session (Regnum, January 14). Russian officials apparently did not participate in the Armenian-Turkish dialogue, but Deputy Foreign Minister Andrei Rudenko met separately with the special representatives—Serdar Kilic, Turkey’s former ambassador to the United States, and Ruben Rubinyan, the deputy speaker of the Armenian Parliament—ahead of their bilateral meeting (Mid.ru, January 14).

Public pressure and domestic political tumult in Armenia make this process quite difficult and, at times, perplexing. For instance, parliamentarians from the opposition Prosperous Armenia Party recently accused Yerevan’s special representative Rubinyan of being an “an agent of influence” of Turkey (News.am, January 17). The role of the large Armenian diaspora living outside the region has also tended to not be particularly constructive when it comes to the normalization process. Any meaningful dialogue with Ankara is considered a consolidation of defeat in the war—political and cultural surrender (Armenian Weekly, January 12). However, the influence of the diaspora over the Armenian government will likely be weaker than has been the case in the past due to broader current trends (see below).

It is worth mentioning that Yerevan and Ankara’s relations were first severed back in the 1990s. Turkey recognized the independence of Armenia in 1991, but the countries did not immediately establish diplomatic relations. And those budding contacts were interrupted in 1993, when Ankara sided with Baku in the Karabakh conflict and closed the border in response to Armenia’s occupation of Azerbaijani territories. Since then, Armenia’s eastern and western borders—with Azerbaijan and Turkey, respectively—have remained closed, leaving Armenia with only two gateways to the rest of the world: Georgia and Iran. Armenia’s economy is consequently negatively constrained even today. Besides the war over Karabakh, Turkish-Armenian ties have suffered due to the issue of the tragic mass deaths and forced relocations of Armenians in 1915–1917 as well as contemporary Armenian territorial claims on Turkey.

The parties tried to normalize relations in 2009, when, in Zurich, the Armenian and Turkish foreign minister signed protocols on the establishment of diplomatic relations. The agreements were to be ratified by the parliaments of both countries, but political pressure in Armenia opposed the points on the mutual recognition of borders. Turkey had linked the ratification with the liberation of the Azerbaijani territories. The process, therefore, became frozen; and later, the Zurich protocols were invalidated (DergiPark, May 1, 2013). A new stage in the relationship began after the 44-day war in Karabakh (September 27–November 9, 2020), which ended with the defeat of Armenia. With the dramatic upending of the situation on the ground in Karabakh, Ankara’s initial considerations for breaking off relations with Yerevan were no longer relevant; hence the parties soon renewed their efforts to normalize relations.

The proposal to hold the talks in Moscow was presented by the Armenian side. While agreeing to it, Turkish Foreign Minister Mevlüt Çavuşoğlu stressed that Ankara prefers both governments to establish direct contacts (Daily Sabah, December 27, 2021). Russia confirmed earlier, that Yerevan had turned to Moscow with a request to mediate (Lenta.ru, November 25, 2021). Foreign Minister Sergei Lavrov acknowledged that Moscow’s role would be to help establish a direct dialogue, and he expressed satisfaction that the first meeting was taking place in the Russian capital (Mid.ru, January 14, 2022). Nonetheless, some Armenian experts have argued that Russia is likely to play a spoiler role (EurasiaNet, September 13, 2021).

The ongoing talks with Armenia coincide with Turkey’s broader effort to improve relations with other countries as well. Elaborating on recent conflict-resolution initiatives with the United Arab Emirates, Egypt, Bahrain and Israel, Foreign Minister Çavuşoğlu noted that Turkey took steps to settle many problematic issues in 2021 (Hürriyet Daily News, December 27).

The dialogue between Yerevan and Ankara has been welcomed and encouraged by both the United States and the European Union (VOA—Armenian service, January 15; Agence Europe, January 14). According to some analysts, the West supports Turkish-Armenian reconciliation in order to weaken Russia’s influence in the region (Bloomberg, January 5). However, even if this rapprochement continues positively, Russia’s pervasive influence over Armenia (see EDM, November 21, 2019 and February 5, 2020) is unlikely to be reduced in the short-to-medium term.

Notably, a day before the special representatives’ Moscow meeting, Flyone Armenia (Armenia) and Pegasus Airlines (Turkey) announced that direct flights between both countries will start on February 2 (Anka.am, January 13). And earlier, Armenia decided not to extend its embargo on Turkish goods (Armenpress.am, December 30).

Although no preconditions have been set publicly, Ankara regularly links the normalization process with Yerevan to Armenian-Azerbaijani relations. “If Armenia shows sincere goodwill towards Azerbaijan, then there will be no obstacles for the normalization of ties between Turkey and Armenia,” President Recep Tayyip Erdoğan said last year (Hürriyet Daily News, October 27, 2021). Çavuşoğlu also underlined that Turkey is coordinating the process with Azerbaijan (Daily Sabah, December 27, 2021). As things stand, it seems any further adverse developments on the Azerbaijan-Armenia front may interrupt the rapprochement between Turkey and Armenia. Parenthetically, President Ilham Aliyev openly stated that Azerbaijan supports the recent statements on the normalization of Turkey-Armenia relations (Interfax.az, November 5, 2021). The sentiment was echoed by Azerbaijani Deputy Foreign Minister Khalaf Khalafov shortly after the Turkish-Armenian meeting in Moscow (Report.az, January 15). In conclusion, the two processes are closely interlinked: if the Azerbaijani-Armenian track fails, Turkish-Armenian reconciliation will not advance further.

Success in the normalization and peace process will hinge on comprehensively resolving issues related to wide-ranging social traumas. Therefore, direct people-to-people contacts may help reduce mutual prejudices and facilitate efforts to bridge historical divides. Many reasons exist to be more optimistic today: the normalization of Turkish-Armenian relations finally seems like it may be within reach.