Vatican and Azerbaijan: Reasons for a Rapprochement

The information was somewhat obscured by Pope Francis’ apostolic trip to Iraq: on March 9, 2021, the Aliyev Foundation and the Pontifical Commission of Sacred Archeology of the Holy See signed a cooperation agreement to restore the Commodille Catacombs. 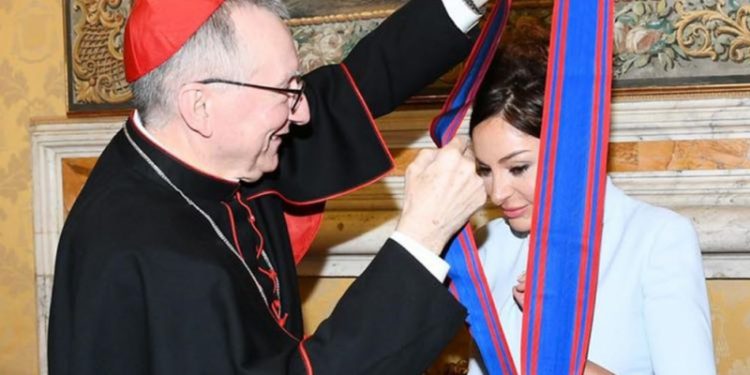 Mrs. Mehriban Aliyeva receiving the ribbon with the Grand Cross of the Order of Pius IX. Image: fsspx.news

In the background looms all the issues of the rapprochement between the Vatican and the Republic of Azerbaijan.

Vestige of the first Christian trails to Rome, the Commodille cemetery, located on the way to Ostia, at the junction of the path which leads from St. Paul Outside the Walls to St. Sebastian, is notably famous for having housed the burial place of the holy martyrs Felix and Audactus.

The president of the Pontifical Council for Culture and the Pontifical Commission for Sacred Archeology, Cardinal Gianfranco Ravasi, described the agreement reached with the Aliev Foundation as a milestone in the relations between the Vatican and Azerbaijan, “which also contributes to the development of interreligious dialogue”—a remark that is anything but trivial.

This event is to be compared with news from the Azeri agency Azertac. On February 22, the Secretary of State of the Holy See, Cardinal Pietro Parolin, gave to the first vice-president of the Republic of Azerbaijan, Mehriban Alieva, the ribbon with the Grand Cross of the Order of Pius IX, the highest ecclesiastical distinction that can be conferred on a non-Catholic.

This explains of the Azerbaijan Ambassador to the Holy See, Rahman Mustafayev, on February 10: “relations with the Holy See occupy a special place in the foreign policy of (his) country.” In other words, global warming is very real between the former Soviet republic and the Vatican microstate. How can it be explained?

It should first be remembered that 96.9% of Azeris—out of a population of nearly ten million—are of the Muslim faith, predominantly 75% Shiite. The country still has vestiges of Christianity, i.e., some churches, the oldest of which date back to the 10th and 11th centuries.

Since its independence in 1991, the Caucasian republic—rich in oil and backed by a remarkable geostrategic position—has claimed a strong attachment to secularism and religious tolerance: two concepts which its leaders use without restraint for foreign policy purposes.

However, Azerbaijan’s priority in terms of foreign policy remains the status of the Nagorno-Karabakh enclave, several months after a ceasefire signed under the aegis of Vladimir Putin, after a lightning war of a few weeks against Armenia, marked by the defeat of the latter.

Armenian-populated Nagorno-Karabakh is claimed by Azerbaijan, but is de facto under direct Russian control. To realize its dream of reclaiming a territory it considers its own in the name of history, the Azeri state must gain Western sympathies, by appearing as a modern country, open to all religions, especially Christianity.

Thus, participating in the repair of the millennial frescoes of the Commodille cemetery makes it possible to forget the unfortunate images of December 2020, in which we saw an Azeri soldier bringing down the cross overhanging the bell tower of an Armenian church conquered in Nagorno-Karabakh.

For the Vatican, interest in this astonishing rapprochement with Azerbaijan can be read in the light of the mirage of Universal Fraternity emanating from the Abu Dhabi Declaration, signed in 2016 between the Argentine pontiff and Imam Ahmed el -Tayeb, one of the highest authorities in Sunni Islam.

The promotion of a tolerant and open Islam which Azerbaijan champions—while concealing the Christianity of Nagorno-Karabakh—suits Vatican diplomacy which cherishes the dream of obtaining a broad consensus in the Muslim world, around the Abu Dhabi Syncretic Declaration.

As such, the refusal by Grand Ayatollah Ali al-Sistani, one of the highest authorities in the Shiite world, to sign the document, is a sour note in the concert of praise played during Pope Francis’ recent trip to Iraq.

During the signing of the agreement to rehabilitate the Commodilla Catacombs, Cardinal Ravasi led his guests to the Basilica of St. Lawrence, where everyone could admire the bas-relief recently restored by the Aliev Foundation, representing the meeting between Pope Leo I and Attila, king of the Huns. They are more than a symbol.