Armenia and the Armenians of the world have activated all propaganda levers, as well as the potential capabilities of their Western allies, distorting the true nature of what is happening on the border with Azerbaijan. 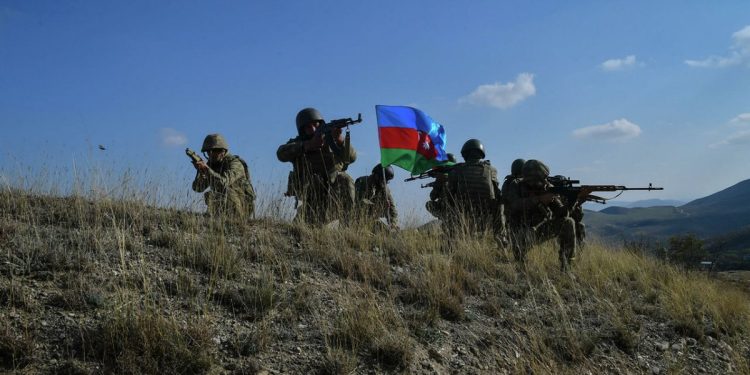 The Armenians of the world have also managed to bring “several towers of the Kremlin” out of the shadows. An amusing geopolitical denouement in the Caucasus: Russia and the US, Iran and the US, and even Moscow and the European Union are engaged in irreconcilable confrontation in every corner of the world, except for the Armenian-Azerbaijani line of contact. Here starts a red line for all geopolitical players with a single consolidating position against the interests of Azerbaijan and Turkey.

But what is happening on the border? Judging by the statement of the Ministry of Defense of Azerbaijan, our worst predictions and fears are being confirmed. Armenia resumed hostilities early in the morning. They are shooting from obsolete Russian weapons directly at the Azerbaijani army units stationed in Lachin and Kalbajar, the areas liberated in the Second Karabakh War. The Azerbaijani troops, of course, return fire and hit the enemy. All rumors and speculations about the Azerbaijani troops advancing across Armenian territory are baseless and unfounded. Azerbaijan itself has been a victim of occupation policy for decades.

However, a fundamentally new situation emerged in the region after the Second Karabakh War. Azerbaijan reached the conditional border with Armenia. And any military provocation or sabotage causes fierce fighting immediately near the Armenian territory. This allows the propaganda apparatus in Yerevan to hype up the artillery duel to the illusory scale of hostilities in the territory of Armenia itself.

Pashinyan declares at every opportunity that he is ready for peace, while de facto playing along with revanchist tendencies because of his electoral dependence. Neither in Moscow nor in Brussels the sides have come close to significant agreements on the unblocking of communications and opening of the “Zangezur corridor”, long-awaited in Baku. Armenia is in no hurry to withdraw illegal armed groups from the area of responsibility of the Russian peacekeepers. Pashinyan’s delegation takes a cynical and ambiguous stance in the negotiations: without refuting any of the principles of the settlement put forward by the Azerbaijani side, Pashinyan effectively torpedoes the implementation of the basic agreements. The Azerbaijani government has with great difficulty, overcoming tremendous resistance, managed to achieve the implementation of the most important point of the Moscow agreement, the liberation of Lachin.

In the best traditions of orange populism, while feeding the Armenian society with optimistic peace expectations, Pashinyan’s government fuels “revanchist sentiments” and emphasizes the “special status of Karabakh”, revives the militaristic spirit and arms the Armenian army with modern American and Russian weapons. Moreover, it appeases Azerbaijani diplomats through its chief negotiators, Mirzoyan and Grigoryan, and establishes a system of arms supply to the Karabakh separatists. He schemes and makes plans for sabotage and guerilla war in the forests of Karabakh. And the newly built military bases on the border with Kalbajar and Lachin became a staging ground for a future dishonest and vengeful war.

In seven hours, special forces of the Azerbaijani Army managed to shatter this staging ground to pieces, with all its new military infrastructure, advanced military bases with weapons and ammunition depots.

The tough stance of the Azerbaijani leadership, primarily President Ilham Aliyev, who had discussed the situation with the security forces the day before, was quite expected. Aliyev repeatedly and publicly warned Pashinyan and the Armenian society, cultivating militant revanchism, about the unpredictable grave consequences of the detrimental policy of escalating the confrontation.

Alas, Pashinyan chose to resort to the doomed and ill-conceived scenario of the “Tovuz war of 2020”. The Armenian prime minister believes that through tactics of military intimidation, Armenia will be able to impose its political agenda on Azerbaijan and give an international flavor to the post-conflict situation by involving the CSTO, France and its Western allies in the new round of hostilities.

What did the attempt to sabotage the peace process end in for Armenia and Pashinyan personally? The result is obvious: in a complete fiasco! Armenia has not only lost strategic heights along the border, but also the border military infrastructure created after the 2020 war. The new air defense system, delivered immediately after the war from Russia, is destroyed. The number of Armenian soldiers killed is in the hundreds. On top of that, another bitter defeat caused a domestic political uproar and a new wave of protests in Yerevan. The Karabakh agenda has once again given way to domestic political collisions. The Armenian society is at a loss as to whether Pashinyan will survive this time.