Armenian and Azerbaijani Foreign Ministers Ararat Mirzoyan and Jeyhun Bayramov met with US Secretary of State Anthony Blinken in New York on September 20. The meeting of the foreign ministers took place on the US initiative in the margins of the 77th session of the UN General Assembly. 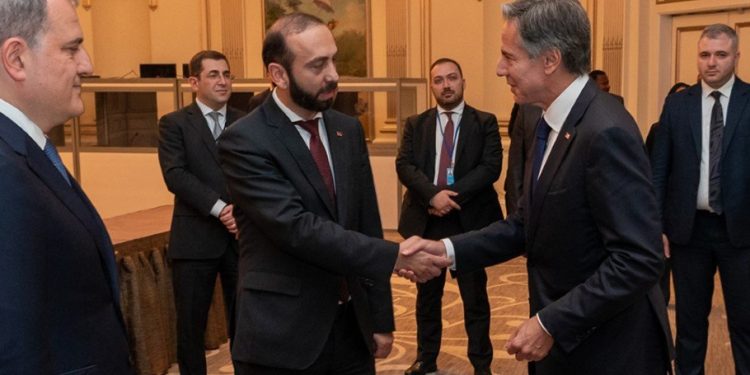 “The contradictions between Armenia and Azerbaijan have no military solution,” Anthony Blinken said before the meeting. After the meeting, the State Department issued an official press release, according to which Blinken called on the foreign ministers of the opposing sides to meet again before the end of September. “Secretary Blinken expressed his condolences for the loss of life and stressed the importance of avoiding further escalation and returning to the peace process,” the State Department said in a statement.

Political analyst Agasi Yenokyan described the New York meeting as an attempt by the US to initiate a new stage of the negotiation process. At the same time, according to him, the position of the United States during the active phase of the confrontation (in 2020 – Ed.) is unclear, given the real levers of influence in the region.

“We see that Washington is unable to effectively influence Türkiye, including in the relationship within NATO. Türkiye, which was the obvious party to the confrontation in the Karabakh conflict,” he told Armenian media.

“Russia, which has economic and politically important leverage in the region, is jealous of the US initiative, not to mention the fact that it is the Russian military contingent stationed in the conflict zone,” Yenokyan added.

“This jealousy can lead to undesirable consequences. Different initiatives to resolve the conflict, instead of complementing each other, may lay the basis for competition, which, in turn, may open a new front of a proxy war between Russia and the West,” the political scientist stressed.

US activism, in his opinion, comes from the interests of Armenian statehood.

“The US, unlike Russia, does not consider Karabakh’s existence as part of Azerbaijan a possible solution to the conflict. Russia, on the other hand, has deployed a military contingent to Karabakh, preferring not to burden itself with Karabakh’s security, social or other issues. Considering that the conflict has been settled by the deployment of troops, Moscow is trying to sell its strategic superiority in Karabakh to Türkiye and Azerbaijan,” he explained.

According to the political scientist, for the US the Karabakh issue is important not so much from the point of view of liberal values, but because the political and diplomatic presence of the OSCE Minsk Group is serious leverage in the region.

In turn, political analyst Aleksandr Iskandaryan told Armenian media that the different venues of the negotiation process do not displace each other and there is no rivalry between them.

He noted that Brussels offers a platform for negotiations and provides technical support for the negotiations to take place. But the EU, he said, is using the security that NATO guarantees, the EU cannot guarantee security on its own.

“Russia, on the contrary, is the country that provided weapons to the parties to the conflict, its peacekeepers are in Karabakh, and its military base is in Armenia. Moscow’s role is different from the Brussels format. The US is the third format, the US has security competence, but, unlike Russia, it is not directly involved in the process,” the political scientist said.

“At different times there was a carte blanche system in conflict resolution, there was a time when the main role was played by the US, then France, then Russia, but now the circumstances have changed,” Iskandaryan added.

“The positions of the US, France, and the European Union are not that they contradict Russia’s position, they are different. It is not possible to combine these positions, to work together because Russia has very bad relations with the West. This is a new element that appeared after the start of the war in Ukraine,” he stressed.

In his view, Armenia is trying to make use of the variety of formats, to find an option that would suit it.

“But this is not easy to do. It is not so much because these formats are diverging, but because in reality, Azerbaijan has a tough position as a country that won the war. This is the result of the war of 2020,” the political scientist explained.

Iskandaryan believes that the sides have managed to achieve some success in the negotiations to unblock the communications. According to him, before the latest escalation, the sides were discussing technical issues.

“No real negotiation process has been initiated on any other issue. Neither on the issue of border delimitation nor on the issue of a peace treaty. Armenia and Azerbaijan present the provisions of the trilateral statement differently, their positions are very far apart. Azerbaijan, due to the distraction of external forces, which are not up to Karabakh because of the war in Ukraine, is trying to achieve the fulfillment of its conditions through external players – Brussels, Washington and Moscow, while using military pressure. The combination of diplomatic pressure, discursive pressure associated with the rhetoric that the Karabakh problem has been solved, and military pressure is the strategy that Azerbaijan adheres to, knowing full well that no one can seriously prevent this at the moment,” he believes.

The political scientist did not rule out another escalation, but a large-scale war is unlikely at the moment, he said. “Azerbaijan has no reason to abandon its policy of military pressure. This is a strategy, not a tactic,” Iskandaryan concluded.