Turkey’s support for Azerbaijan in its latest war with Armenia could have much greater ramifications, with Turkey using Azerbaijan’s geographic position as a springboard to reach out to Central Asia. 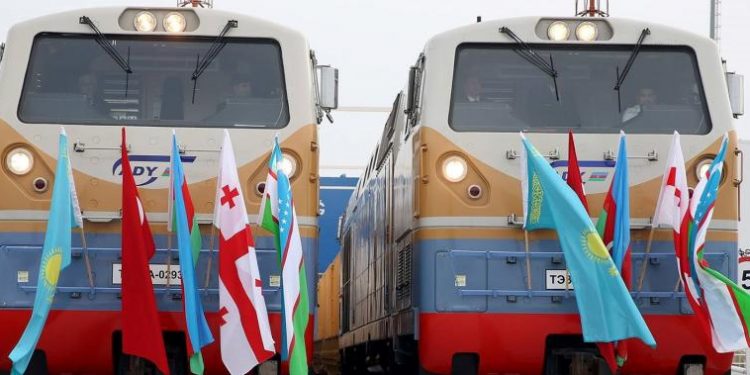 Although China and Russia loom large in the region, Turkey could tap into the significant cultural leverage it has, along with Central Asian states’ willingness to diversify their foreign relations away from Moscow and Beijing.

Turkey has recently displayed a growing Eurasianist shift in its foreign policy. China’s economic rise and growing geopolitical weight have led many Eurasian states to recalibrate their foreign policies. Looking east has become the new norm, with Iran and Russia being perhaps the most prominent examples. Although Turkey lags behind, it has recently started to merge an eastward-looking policy with its own geopolitical aspirations. Ankara seeks to expand its reach further east into Central Asia, in the hope of forming an alliance with the other Turkic-speaking countries: Kazakhstan, Uzbekistan, Kyrgyzstan and Turkmenistan.

Efforts to extend Turkish influence eastward begin at the 114 km border with Georgia, which provides the most stable land route from Turkey to the Caspian Sea and Central Asia. Georgia and Azerbaijan serve as a springboard for Turkey in terms of penetration to the Turkic-speaking republics. Turkey’s rationale for developing the South Caucasus corridor (Middle Corridor) is determined by geography, and much has been achieved so far. In 2017, Azerbaijan’s President Ilham Aliyev hosted Turkish President Erdogan, as well as then-Georgian Prime Minister Giorgi Kvirikashvili, at a ceremony to launch the first train on the newly built Baku–Tbilisi–Kars (BTK) railway, which stretches from the Caspian Sea port of Alat to the city of Kars in eastern Turkey.

This set the scene for improved connectivity not only in the South Caucasus, but also for the landlocked Central Asian states. The project opens a rail corridor potentially connecting Central Asia with European markets through the South Caucasus. The goal of increasing connections to Central Asia is also reflected in the outlined intentions behind the construction of the port at Alat, one of the largest ports in the Caspian Sea region.

Railway routes are further complemented by pipeline connections. Turkey’s wider ambition to position itself as an energy transit hub dovetails with its aspiration to reach out to the Central Asian states. The Trans-Anatolian Natural Gas Pipeline, the Trans-Adriatic Pipeline and the South Caucasus Pipeline have the potential to transport gas from beyond the Caspian Sea to Europe.

Turkey’s outreach to Central Asia is also dictated by its energy needs. Although major gas finds in the Black Sea were announced in 2020 by Ankara, the country still largely depends on external energy supplies. Hence, finding new sources of energy and ensuring that neither Russia nor Iran has a monopoly on energy transportation corridors is a major geopolitical concern for Turkey.

The Middle Corridor is also intended to complement Beijing’s massive Belt and Road Initiative. In November 2015, Ankara and Beijing signed a memorandum of understanding on aligning the Belt and Road Initiative and the Middle Corridor at the G20 summit in Antalya. Some further progress has been made: in 2019, China extended its currency swap agreement with Turkey, providing an additional $1 billion cash transfer to Ankara. Furthermore, the number of Chinese containers transported across the Caspian Sea via the Trans-Caspian Corridor increased by 111% in 2019 compared to the previous year. On 19 December 2020, the first freight train carrying cargo from Turkey to China via the Trans-Caspian Corridor completed its historic trip. Additionally, in late 2020, trains were sent from Turkey to China and back using the BTK route for the first time.

The Second Karabakh War has further propelled Turkey’s interest in linking to Central Asia. While Turkey’s support for Azerbaijan could be explained by the fact that Baku became Ankara’s biggest gas supplier in 2019–2020, it also regards Azerbaijan as a springboard. Just two months after the November ceasefire in Nagorno-Karabakh, Turkey signed a new trade deal with Azerbaijan. Turkey also sees benefits in Azerbaijan and Turkmenistan’s January agreement, which aims to jointly develop the Dostluk (Friendship) gas field under the Caspian Sea. Moreover, Turkey recently hosted a trilateral meeting with the Azerbaijani and Turkmen foreign ministers on 23 February. Turkey’s interest in joint exploration and development of hydrocarbons with the two countries was recently highlighted by foreign minister Mevlut Cavusoglu, who said that trilateral meetings and summits would be held in the near future. The progress around Dostluk could potentially remove a significant roadblock to the implementation of the much-touted Trans-Caspian Pipeline, allowing gas to flow through the South Caucasus to Europe. This is an issue where Russian and Iranian interests align against Turkey’s ambitions, since both see Turkmenistan as a competitor in the European gas market.

Another result of the war is the creation of the Nakhchivan corridor. According to the 10 November 2020 ceasefire agreement, this will connect the Azerbaijani exclave of Nakhchivan through Armenia to Azerbaijan proper. This would provide Turkey with a direct corridor to the Caspian Basin and, as Turkish analysts have suggested, could also be used by the Chinese.

Turkey’s outreach to Central Asia has intensified through official visits. From 6 to 9 March, Cavusoglu visited Uzbekistan, Turkmenistan and Kyrgyzstan. Responding to a question on defence cooperation, Cavusoglu said that Uzbekistan is interested in Turkey’s defence products and is working with different Turkish companies. With Turkish-produced weaponry making the news during the Second Karabakh War, its export to Central Asian states is a good possibility. It has been reported that Uzbek leaders were especially interested in Turkish arms. In addition, Cavusoglu said that Ankara was working with Uzbekistan on a preferential trade deal and free trade agreement. Other issues including energy, trade and transport were discussed as well.

In a related move, Ankara recently resurrected a regional trade agreement during a virtual meeting of the so-called Economic Cooperation Organization on 4 March. The grouping was formed in 1985 to facilitate trade between Turkey, Iran and Pakistan. While its effectiveness has been limited, the timing of its re-emergence is important as it fits with Ankara’s overall eastward push.

Turkey’s economic presence in the region remains modest. China and Russia overshadow its trade capabilities – Turkey is not a top trade partner for any of the regional countries, except for Turkmenistan. Nevertheless, Turkey aims to build an economic and cultural basis for cooperation, which involves creating a common market for goods, investment, labour and services by 2026–2028.

Recent moves by Turkey build upon a decade of efforts – though at times half-hearted – to boost connections to Central Asia. Ankara created the Turkish Cooperation and Coordination Agency in 1991 to increase cultural and economic ties, as well as the Turkic Council in 2009. Ankara has had some success in increasing its soft power, such as through the funding of schools in the region.

Despite this push to re-engage the region, Ankara also faces significant roadblocks. Relations with China are crucial here. Despite numerous attempts by China to establish stronger ties with Turkey – including investment in industry, energy, transportation and telecommunications – significant deals have not materialised. Progress has stalled in Chinese efforts to modernise Turkey’s railroad network, as well as in negotiations over a third nuclear power plant in Turkey. It is possible that Ankara has been hesitant to offer lucrative contracts to Chinese firms that it sees as competitors.

Relations with Beijing matter as they are tied to Ankara’s drive to establish better transportation and economic connections with Central Asia, where China is economically dominant. Over the last three years, Turkey has increased customs duties and import quotas, which directly impact China more than any other country.

While China and Russia loom large in the region, Turkey has significant leverage in the cultural realm, and it could exploit Central Asian states’ desire to diversify their foreign relations away from Moscow and Beijing. Dependence on either power has at times caused trouble in regional capitals. Furthermore, Kyrgyzstan and Turkmenistan are in need of cash, increasing the potential for Turkey’s economic penetration.

Another interesting component of Turkey’s vision for the Caspian Basin and Central Asia is that it dovetails with the West’s strategy toward Russia and the two regions. This creates the potential for cooperation between Turkey and the West. Both are interested in receiving Turkmen gas and breaking Central Asia’s ‘geographic prison’ to alleviate its dependence on Russian – and, increasingly, Chinese – infrastructure. Turkey and the West have similar, if not identical, geopolitical ambitions: promoting east–west corridors as opposed to the traditional Russian-dominated north–south or China-promoted east–west pipelines, roads, railways and other critical infrastructure.

Turkey’s power projection into Central Asia will continue to be overshadowed by Chinese and Russian efforts. Nevertheless, Ankara’s recent moves signal a more robust Turkish policy towards the region that has been lacking until recently. Anchoring its approach to Central Asia on Azerbaijan will be critical, as the country’s geographic position could allow Turkey to push eastward across the Caspian.